Concert Review: ‘And The Tony Goes To…’ presented by the Gay Men’s Chorus of Washington at the Lincoln Theatre 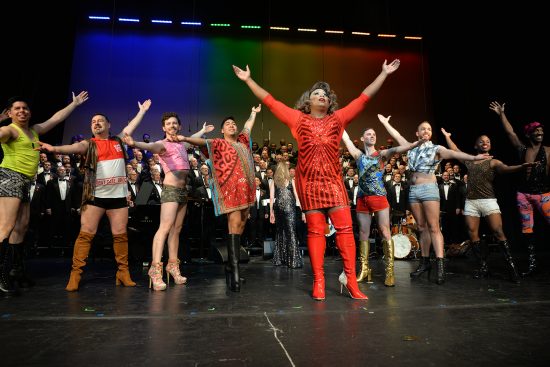 The Gay Men’s Chorus of Washington close out their 2016-17 season with Raise You Up/Just Be from “Kinky Boots”, with soloist Ryan Williams (center.) Photo by Michael Key.

My favorite lyric from the musical “Kinky Boots” comes at the very end of the show. A character named Don who had been initially closed-minded and judgmental of drag queen Lola, loudly proclaims “you change the world when you change your mind.” Today more than ever, this is an incredibly important concept. This song and many others from Tony award-winning shows were presented in grand style, along with poignant reminders of important milestones in LGTBQ history, this past weekend at the Lincoln Theatre, as the Gay Men’s Chorus of Washington concluded their 2016-17 season.

Each year, the American Theater Wing and the Broadway League hold an awards ceremony in New York City to honor achievement in Broadway live theater. The “Tony” awards, as they have come to be known, often represents the highest echelon of excellence in the American theater community. They nearly always take place at the beginning of June, so the Gay Men’s Chorus of Washington’s choice to have a Tony tribute as their final performance of the season is quite timely, as the 71st annual Tony Awards will be broadcast this Sunday, June 11th at 8pm on CBS. However, June is also known as Pride month, a month that celebrates the LGBTQ community; it’s past, present and future. Pride evolved from a series of protests stemming from the violent police raid on the Stonewall Inn, one of only a few establishments where openly queer people were welcomed in the 1960s. The convergence of these two events, both on the Lincoln Theatre’s stage and in time cannot be coincidence, as the theater world has long been at the forefront of acceptance and promotion of the LGTBQ community.

The show began with a classic tune, long held dear to the LGTBQ community and connected to the rainbow flag that has become a beacon of tolerance: “Somewhere Over the Rainbow.” Soloist Jon Perry got the song off to a beautiful, smooth start, then was joined by the full chorus. The intricate harmonies and masterful ebb and flow of volume infused layers of meaning into this iconic song. Perry’s fantastic high heeled ruby slippers finished the effect to perfection. From there, the chorus presented a wide variety of songs from musicals old and new, known and faded, but all from Tony award winning shows. These songs were then paired with milestones from LGBTQ history. The performance also consisted of a collection of several smaller ensembles along with the Chorus, making for a varied performance with something for everyone.

Historically, we’re told by the voice-over, the first gay character on Broadway appeared in 1969s “Coco.” The voiceover also proclaims that this was a “hateful, b****y character,” but admitted that the representation at all was a step forward. John Knapp gave an animated performance of the tune “A Brand New Dress,” from the musical. Some other highlights of the first half for me were the chorus’ performance of a favorite Broadway tune of mine, “Being Alive” from Stephen Sondheim’s “Company,” an impressive song AND dance routine from “A Chorus Line,” with a heartbreaking monologue included, a rousing version of “I Am What I Am,” from the barrier-breaking musical “La Cage Aux Folles,” a touching tribute to the devastation that AIDS wreaked on the theater community in the 80s and 90s, connected to the musical that brought the day to day lives of people living with the disease to the public: “Rent.” The first half concluded with the chorus’ performance of “Make Them Hear You,” a song from the musical “Ragtime,” where the characters long for justice. Members of the Chorus came into the audience, so the haunting sounds surrounded the audience on all sides. The beauty of the sound and the power of the words brought tears to this reviewer’s eyes. It reminded us that even though there has been a great deal of progress, there is still a long way to go.

Act 2 opened with a spicy rendition of a Broadway favorite: “Wilkommen” from the musical “Cabaret.” Tim Tourbin turned in a performance as the Emcee that was equal parts comic and kink. The Kit Kat Boys were also a pleasant eyeful on a Sunday afternoon, their provocative costumes eclipsed only by their expert dance moves. The hilarious number “If You Were Gay” from Avenue Q was side by side with an emotional work like “I Know Where I’ve Been” from “Hairspray,” each end of the spectrum equally well done and expressed. My favorite performance of the night was without a doubt “Wig in a Box” from “Hedwig and the Angry Inch.” JJ Vera turned in a stellar performance as the titular Hedwig; you could not take your eyes off of him. And his Wigettes (Harry Murphine, Josh Peterson and Joe Wenninger) rounded out a solid performance of an eclectic hit. The finale from “Kinky Boots” (“Raise You Up/Just Be”) closed out the performance, as well as finishing several numbers paying homage to Drag culture.

This performance, in addition to being incredibly entertaining and very high caliber musically, also took the audience on a journey that the LGBTQ community has lived. It was the perfect balance of celebration and remembrance, enjoyable and thought-provoking. Kevin Thompson performed a beautiful rendition with the Chorus of “What I Did For Love” from “A Chorus Line” over an in memoriam of influential LGTBQ members of the Broadway community that we have lost, some too soon. This performance was what all art strives to be; both entertaining and moving. Thea Kano, Artistic Director of the Chorus and conductor of the live musicians of the show is to be commended. She put together an amazing group of performers and paired them with an impressive and varied program. The choreography and costumes were also impeccable, and the balance of the stage and use of psych (and a fantastic glitter curtain) made for an effective musical experience. There were a few technical difficulties, but overall it was an amazing performance.

For more information about the Gay Men’s Chorus’ upcoming performances, or to support them, please click here.

For more information on the 2017 Tony awards, please click here.