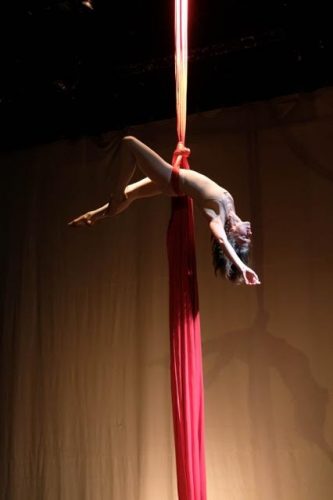 Laughter. Lamenting. Affectionate professions of love and honest confessions of struggle. Against this audio backdrop, you take in a living, breathing sculpture, shaping, shifting in real time before your eyes. Just what is this peculiar, yet profound experience of art you’ve become a part of?

‘Air(realist),’ by Air Dance Bernasconi with Kirsty Little provided a feast for the eyes through a combination of performance art and aerial dance, a fluid, suspended style of dance that appears to reject gravity and succumb to it all at the same time (Think modern dance in three-dimensions.). Using a variety of apparatus such as silks and trapeze, this company of aerial dancers wielded their bodies in this show to portray themes of humanity’s pleasure, pain, potency, and potential.

The ‘Air(realist)’ experience took me to a higher dimension and left me with one conclusion: Release the baggage and ascend.

The show guided me on a tour of human experience through a series of mesmerizing vignettes. Featured artist Kirsty Little interpreted motherhood as a beautiful burden and painful joy in the piece, “Continuous.” Her grounded choreography, termed sculpture, utilized harnessed weights and deliberate, controlled movement, which physically expressed the stories of 45 mothers and children playing as a soundscape in the background.

Little’s performance set the tone for the evening’s journey, as she had a uniquely candid way of connecting to the audience through physical language. Carey Nagoda’s enchanting aerial performance of “Sweet the Sound” featured guitarist Dallas Jacobs, and in lyrical synchronicity, the two depicted the sweet pleasures of relationship. With impeccable coordination and balance, Kirsty Little called out our environmental responsibility through an in-your-face commentary, “Toxic Poison Pills,” accompanied by vivid video imagery and use of exaggerated plastic props. My personal favorite, “Breathe,” was particularly moving. With profound transparency, Kirsty Little presented the struggle of being stuck or feeling bound that many of us experience throughout life’s challenges through an artful binding and unraveling of her body with silks. By the end of the piece, I exhaled.

Founding Artistic Director Jayne Bernasconi showcased the excellence of artistic collaboration through this show. A cast of contributing, skilled movement artists and repertory dance students exhibited great skill and strength through choreography featuring complex interchanging of apparatus, daring heights, and emotional whimsy. Other contributing artists made their mark in this show as well through video and sound artistry. Melissa Hauprich’s video editing for the “Air(realist)” piece was wonderfully textured, and her creative weaving of image and color made two-dimensional imagery leap from the screen – just simply a treat.

The ‘Air(realist)’ experience took me to a higher dimension and left me with one conclusion: Release the baggage and ascend.

Running Time: Approximately one hour and thirty minutes with a 15-minute intermission.