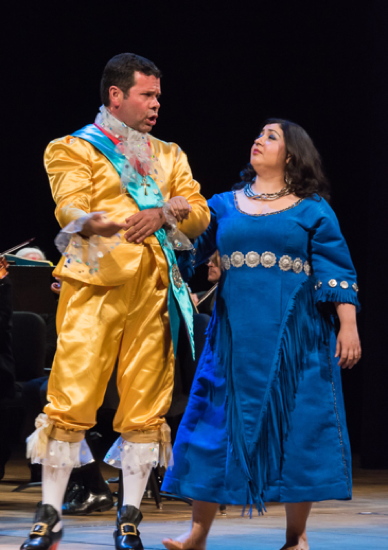 “Les Indes Galantes” by Jean-Philippe Rameau is a classic example of ballet héroïque, an opera ballet featuring what was seen as exotic in 18th century Europe.  This one consists of four entrées, each one representing another culture. Opera Lafayette’s program featured portions of the prologue, “Le Incas du Pérou,” “Les Fleurs” and the entirety of “Les Sauvages.” The connecting theme is the power love. Librettist Louis Fuzelier crafted a beautiful story that celebrated these culturally rich societies.

The program featured the Gallery Voices, a lovely eight-person ensemble. They had full voices and moved well across the stage. They filled out the pieces of music beautifully and were wonderfully synchronized.

…a well performed and well directed night of music.

The selections for the program truly displayed Rameau’s ability to compose the grandiose and the delicate. Listeners can hear his strength in the traditionally Baroque overture and his more nuanced sweetness in the Air pour Zéphir in “Les Fleurs.” It was a fairly short program, but intentional and pleasant. Within one hour the audience was able to get a wonderful flavor of “Les Indes Galantes.”

Victor Sicard sang the role of Adario, a man who is desperately in love with Zima and concerned that the foreigners who have recently arrived will steal her love away. Sicard has a beautifully creamy baritone which fills the room with sensuality. His voice manages to portray deep romance and he is compelling to watch.

One of Adario’s rivals is Dom Alvar, from Spain. The role was sung by André Courville. Courville has a stunningly resonant bass-baritone. He fills the room with his powerful voice and easily portrays this confident and masculine character.

The other rival, the Frenchman Damon, was sung by Robert Getchell, a sweet tenor. Getchell sings with a gentleness and nuance that is refreshing. He has a slight dancing quality which gives the music unique life. His voice blends beautifully with Courville’s and they sing together pretty often.

Zima was sung by soprano Sherezade Panthaki. Her voice soars effortlessly to the top notes. She also manages to be mild yet stout. Zima ultimately chooses Adario and they wed. The entrée ends with a triumphant dance of peace between all of the characters.

It was a wonderfully concise program that revealed a great deal of diversity within a single piece of opera. It was a well performed and well directed night of music.

‘Les Indes Galantes’ from Opera Lafayette was performed at the Lisner Auditorium on May 31, 2017. For more information or tickets click here.