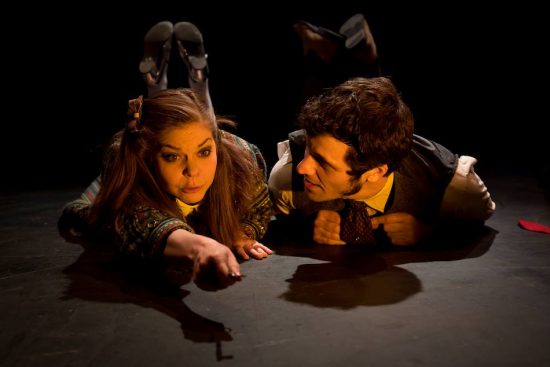 Down the rabbit hole Alice falls, landing into a wonderland full of talking creatures in The Collaborative Theatre Company’s imaginative production of “Alice in Wonderland” by the Manhattan Project.  “After a fall such as this, I shall think nothing of falling downstairs,” Alice says.  The fall is only the beginning of her adventures.

Directed with passion by Kel Millionie, a hard working ensemble of 6 actors perform 32 different characters. Millionie says, “We are reimagining Alice’s antics in a raw journey through the human condition that is informed by some of the great minds of the 20th century, including Freud, Jung, Kafka and Dalki.”

Also serving as the Set and Lighting Designer, Kel Millionie creates a dark, avant-garde wonderland set made up of doors and shutters going every which way while lights pierce through windows as if to confuse and disorient Alice.

The Sound Design by Christopher Flint also plays an important role in this production.  Sounds of birds chirping and relaxing, hypnotic music puts the audience in an almost trance-like state, ready to go down the rabbit hole with Alice.

The play allows your imagination to fill in the gaps. For example,  Properties Artisan Mia Fiorentino made a cardboard painted Cheshire Cat grin held on a stick.  Creative touches by Costume Designer Ann Turiano include Alice’s cat Dinah being a cat purse hanging around her neck.

Holly Gibbs is a delight as a Mouse with a French accent who hates cats and dogs and a fright as The Red Queen whose only rule is that she must always be right or “off with your head!”

Nick Fruit plays a few roles such as the Rabbit, Dodo, and The White Knight, but is most memorable in his role as the Caterpillar.  Dressed in a long green gown, Nick Fruit is wild, wacky, and wonderful as the Caterpillar who asks, “Who are you!”  Also fitting to the scene are the two actors playing the Mushroom.

Gabe Fremuth gets the plumb role of The Mad Hatter while Barbara Madison Hauck is all smiles as The Cheshire Cat.

Chris Cotterman adds a natural charm to all of his roles, especially the Crab and Humpty Dumpty.  Whenever Cotterman interacts with the actress playing Alice, I also noticed a magical chemistry, a connection that helped to amplify the story behind the characters.

In the title role as Alice is actress Sarah Burton. Authentic and engaging, Sarah Burton achieves mastery in her performance as the curious little girl who falls down a rabbit hole.

The Collaborative Theatre Company’s production of “Alice in Wonderland” is an imaginative journey down a rabbit hole.  The avant-garde wonderland will entertain adults who like a philosophical interpretation.  Young children, on the other hand, might find the play too far reaching and long to understand and appreciate, but still may enjoy a laugh or two at some of the character’s antics.