Theatre Review: ‘Arsenic and Old Lace’ at Cockpit in Court 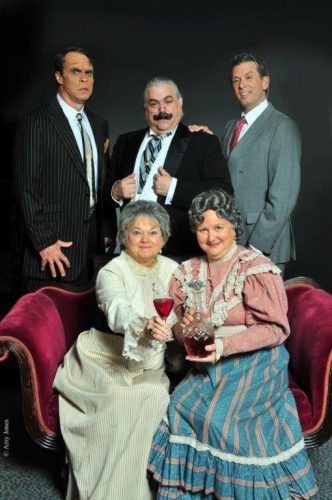 The cast of “Arsenic and Old Lace.” Photo courtesy of CCBC.

You might consider your family quite normal after paying a visit to the Brewster family.  After all, it’s unlikely that you have corpses in your cellar, even if you have skeletons in your closet.  But, if you decide to visit the Brewster family,  please say “no thank you” if two sweet senior citizens offer you a glass of their homemade elderberry wine, even though it’s to die for.

Corpses, cops, and a crazy family is the recipe for Joseph Kesselring’s farcical black comedy “Arsenic and Old Lace,” now playing at Cockpit in Court in Essex, Maryland.

“Arsenic and Old Lace” is your chance to see the brilliant work of Director F. Scott Black, complete with dream cast.

Earlier this June, the main stage theatre was named after Cockpit’s founding Artistic Director, F. Scott Black.  To honor this event, F. Scott Black has directed the play.  Also of note, this will be the first play that Cockpit theatre patrons have been able to see on the main stage in years.

Set in the living room of the Brewster home in Brooklyn, New York in 1941, “Arsenic and Old Lace” is centered around Mortimer Brewster, his bride to be Elaine Harper, and the twisted Brewster family.   Mortimer has returned to his family home only to discover that his aunts Abby & Martha, who raised him and his brother Teddy (B. Thomas Rinaldi), have developed a “very bad habit” of ending the lives of men they presume are suffering of lonely old bachelorhood.  Just when you think things couldn’t get any worse, Mortimer’s other brother Jonathan, who resembles Boris Karloff, shows up with his plastic surgeon, Dr. Einstein (Dale Trott).

F. Scott Black has assembled a dream cast, featuring some of the finest talent in the Baltimore area.   Darren McDonnell does a fine job as the face of sanity in the play, Mortimer, a good-hearted cynic who is a theatre critic in New York.  Mortimer’s fiancée, Elaine Harper, played by an attractive Kristin Miller, delivers a fiery and passionate performance as the daughter of Rev. Dr. Harper (J. R. Lyston).

Carol Conley Evans has a welcoming, yet crazy look in her eye that makes her performance believable as Abby Brewster.  And Joan Crooks as Martha Brewster with her gentle face and polite manner makes her portrayal all the more comedically creepy.

Seemingly in competition with his aunts as to who has murdered the most people, Greg Guyton as psychopath Jonathan Brewster gives a performance that is to die for, or at least get choked up over.  With his labored walk, Guyton embodies the style of legendary movie monster Boris Karloff, down to the feverishly shaking of his hands when rage ensues.

“Arsenic and Old Lace” is your chance to see the brilliant work of Director F. Scott Black, complete with dream cast.  So help me in raising a glass of homemade elderberry wine in honor of Cockpit in Court’s killer production!

“Arsenic and Old Lace” plays through June 25, 2017 at Cockpit in Court in the F. Scott Black Theatre of The Robert and Eleanor Romadka College Center at the Community College of Baltimore County Essex Campus— 7201 Rossville Boulevard, Essex MD. For more information, click here.