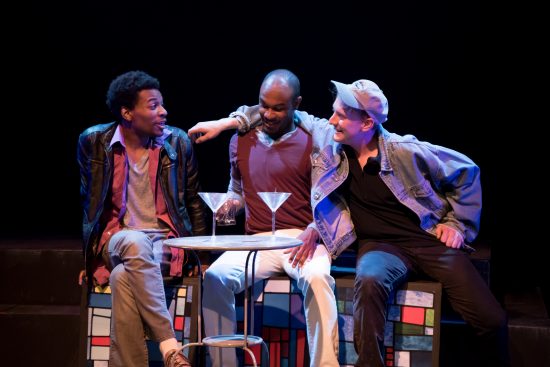 Welcome to Baltimore Pride Week!  The festivities are off to a fabulous start with Iron Crow’s final offering of the season, “BootyCandy,” now running at Theatre Project, which has been designated ‘The Official Show of Baltimore Pride 2017.’ Written by Robert O’Hara, it is a darkly comic look into the life and times of one gay, black man’s journey.  While there are a couple of rather puzzling detours along the way, the ride is never less than immensely entertaining.

Director Brandon Rashad Butts – and I have to stop here to point out the delicious irony of a guy named Butts directing a play called Booty Candy –  has assembled exactly the quality of cast and crew that we have all come to expect from Iron Crow productions.  In a smartly paced series of vignettes, the various characters come to life in rapid succession, sometimes so quickly that I had to stop and ask myself whether some of them were being seen for the first time or had we seen them in a previous sketch?  Always problematic with a series of sketches and a small cast playing multiple parts, Butts nonetheless skillfully weaves the whole production into a wonderful tapestry.

…Iron Crow has hit another home run in this timely and relevant production.

Bob Denton’s suitably minimalist set utilizes large blocks that serve as both seating and scene-suggestors to nice effect.  Ryan Johnson does an excellent job with the lights, though some of the actors had a little trouble finding the sweet spot to stand in for the best illumination.  Mika Eubanks captures the spirit of the times with terrific costuming.

Aquirra Lundy does a wonderful job portraying every one of the roles she plays in all the vignettes.  She has an unexpected delicacy in some and in others, she’s as tough as shoe leather.  In all of them, she is never less than utterly watchable.

Jey Holman is her female equal, foil, ex-partner, Mother and others, and she handles each of them with a range of skill that is quite impressive.  As the mother in one particularly long monologue, she reminded me and probably most of the audience of the quintessential Mama on a Rant.  You know what I mean – those times when Mom’s on a tear and you just have to sit quietly and take it, lest you make it worse.  Holman made me cringe in the best kind of theatrical way.

Jared Swain is so darn good-looking that it came as a bonus that he is such a fine actor.  He swings between personas with the ease of a Walinda.  His dead-pan dad with few lines is his quietest moment in the play but he does it so well it speaks volumes about his approach to all his characters.  And his speeches as the preacher who has a secret to share with his congregation are show stoppers.  A talent I am going to look for in the future. If he’s on a stage, I want to see it!

Jessie Marciniak may well be one of the bravest actors I’ve seen in a while.  He does clueless white boy so well that it seems effortless but really hits his stride in the dramatic moments.  He had me in tears during one particularly heartbreaking scene, where he tells a man he just met, “I just wanna be held.  I just wanna feel someone.”  He is so completely honest and revealing in his speeches, his body language and his responses to the action that it’s proof this is an actor of substance, and seeing him in any production is going to be worth the price of the ticket.

Justin J. Bell plays Sutter, the one constant character in scene after scene.  First introduced as a young boy, he has a beguiling innocence.  As a teenager, the angst rolls off of him in waves as he discovers his gayness, much to the stock response of his less than accepting parents.  As a young man, he is the perfect millennial in a scene with his grandmother and manages to explain the magic of smartphones to her without ever being smug or condescending, though the dialogue would have easily allowed that approach.  Bell is delightfully self-actualized at every stage of Sutter’s development. On top of all that, he’s as ‘cute as Christmas,’ as my own grandma used to say. A terrific performance by an outstanding young actor.

“BootyCandy’s” central theme is one that has been little explored on stages until recently. Robert O’Hara’s play is a welcome addition to the growing canon of work that symbolizes the unique challenges of being black and gay. The themes of familial acceptance, relationships, how unfulfilling a realized revenge might be, consequences of your actions on others’ lives, all are in play here and Iron Crow has hit another home run in this timely and relevant production.

Advisory: Please note that “BootyCandy” explores mature themes, contains adult language, sexual content, partial nudity and violence. “BootyCandy” may not be suitable for patrons under the age of 18.