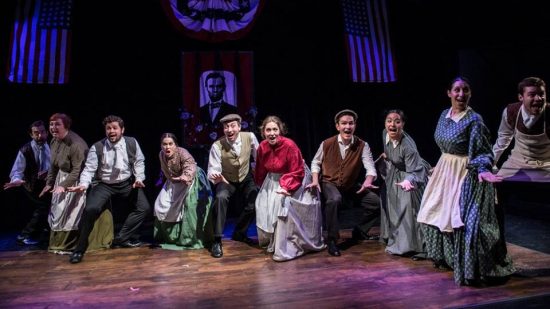 Ask someone to name a bad president and they’ll be quick to offer several names. Ask someone to name a bad First Lady, and it’s likely that one name will jump to come to mind. Mary Todd Lincoln is as reviled as her husband was revered; in C-SPAN’s occasional surveys of historians, she is rivaled in infamy only by Florence Harding, who may have actually poisoned her husband.

The legacy of “Crazy Mary Lincoln” is explored in a new musical closing this weekend at the Logan Fringe Arts Space Trinidad Theatre, and while the Pallas Theatre Collective does fine work, and Tracey Elaine Chessum’s direction is superb, the show itself is a work in progress. This is as it should be: The production is part of the company’s TableRead series, wherein a show goes through a two-year process of readings before full production. This first full staging is part of that process.

…the second half is wonderful.

The show starts on the night of Abraham Lincoln’s assassination, and an image of the fallen president, draped in black, hangs at center stage throughout the show, looming over the action like a ghost. (The rest of the set design is simple and functional: some bunting, two 35-star American flags with out-of-the-box wrinkles that reveal their newness, crates to serve as furniture.) We then witness the next decade of the lives of Lincoln’s widow and her eldest son, who live in a tandem of mourning and frustration.

Robert Lincoln is as much the focus as his mother, and Russell Silber does a fine job of making this controlled man, who swallows his grief and his anger, sympathetic. Silber’s singing is a bit weaker than his acting, but even the occasional missed note adds to this stifled man. Melynda Burdette, as Mary Lincoln, is just the opposite: She has a big voice that carries the songs with an operatic flair, but in her spoken scenes, at least in the first act, she is a bit stiff.

This may be less the fault of Burdette than of the material. For while Chessum’s staging is excellent, and the ensemble — charged with playing multiple roles at a frenetic pace — is uniformly solid (Stefanie Garcia, Madeleine Koon, and Garrett Matthews in particular), the script needs some punching up.

From the moment the lights dim, everyone hates Mary, and the script does not explain why. She is treated horribly, with sneering politicos refusing her any say in where her slain husband will be buried and scoffing at the notion that she might want to be buried beside him. The text does not explain this, nor will it later take a firm stance on whether or not she was actually mentally ill. It’s a portrait without a perspective.

It does not help that the show’s first four songs are also the four weakest. Composer Jay Schwandt is going for a funeral feel here, with strong hints of Wesleyan hymns, but it’s rather suffocating. Things pick up after that — a few jauntily cynical numbers lead into “Come One, Come All,” where Chessum has set Mary as a carnival freak being gawked at by the public. Brevan Collins’s Tad Lincoln lightens the mood with his occasional appearances — until he, too, dies. (Spoiler!)

While the first act was uneven, the shorter second act hits every mark. Burdette is better here, perhaps because, rather than just being the focal point of other characters’ scorn, she finally has something to do. Scenes set at Bellevue inject both dark humor and some feminism into the proceedings, and choreographer Koon has crafted some lovely and lively dance scenes.

The show’s conclusion is a bit pat — this isn’t a clan that will get a “happily ever after” — but on a whole, the second half is wonderful. As the show’s evolution continues, I hope more of that energy will be seeded into the first.