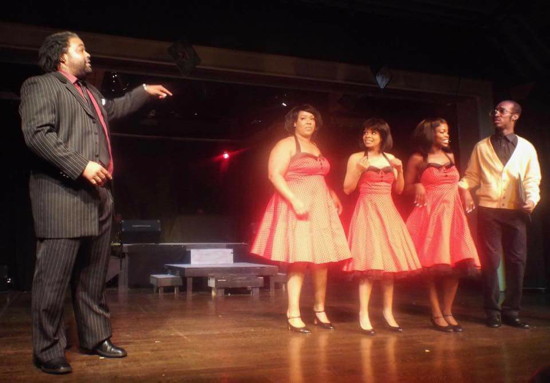 The cast of “Dreamgirls”: Now playing through June 25th at the Gaithersburg Arts Barn. Photo from ANKH Repertory Theatre – ART.

Is there anything more American than a rags-to-riches story? Deena, Lorrell and Effie fake their way to the top in the toe-tapping “Dreamgirls,” a musical loosely based on the story of The Supremes, now playing at the Gaithersburg Arts Barn by ANKH Repertory Theatre – ART.

…an enjoyable rendition of what is sure to become a modern classic.

The story centers around best friends and aspiring singers Deena (Linae Bullock), Lorrell (Azaria Oglesby) and Effie (Jasmine Prather) as they try to break into show business in the 1960s. They are led by Effie’s powerful and unmistakable voice, Deena’s shy beauty and Lorrell’s spunky charm. One night as they compete at a talent competition at the Apollo, they meet someone that is going to change their lives forever: Curtis Taylor Jr. (Tyrone Lyles Sr.). A car salesman in both actual profession and personality, Curtis charms his way into the good graces of well-known performer James “Thunder” Early (Edward Byrd), convincing him to put the girls into his act. This does not sit well with Jimmy’s manager, Marty (Edward Michael Grant), who calls out Curtis’s methods as dirty. Curtis pays this no mind, and partners with Effie’s brother, aspiring songwriter C.C. (Tyrell Martin) to start a payola scheme that will rocket Jimmy and the Dreamettes to stardom.

Curtis begins a relationship with Effie, who always goes after what she wants. However, once Jimmy embarrasses Curtis at a nightclub performance in Miami, Curtis decides it’s time for the newly named Dreams to break out to their own act – with Deena singing lead. The resulting confrontation shakes the family that the group has built, ultimately ending with Effie being expelled from the Dreams and Deena taking her place, both in the group and by Curtis’s side. Lorrell also begins a tempestuous relationship with Jimmy, who is already married. The women navigate the world of fame and relationships until they can come back together again.

“Dreamgirls” premiered on Broadway in 1981, and featured a star-making turn by Jennifer Holiday. It was considered revolutionary at the time, as the majority of the cast is African-American and the three leads are all women. Most people will probably know the story from the 2006 film adaptation starring Beyonce Knowles, Jamie Foxx, Eddie Murphy and the Academy Award winning film debut of Jennifer Hudson as Effie. There was a revival launched last year in London’s West End, starring “Glee’s” Amber Riley as Effie. Due to its wild success, it looks like it will return to Broadway next year.

Lyles delivers a solid performance as Curtis, making it believable that Deena, Effie and even Jimmy would be drawn to him, but also believable that he would betray Effie and split up life-long friends to push his own dreams forward. Martin’s performance as C.C. shows great depth, as he is forced to face up to turning his back on his sister due to Curtis’s influence and the humility to try and make it right. His voice is also great, specifically in the emotional tune “Family.” Grant and Zorah Love provide excellent supporting performances, fleshing out the show’s story.

But the true standouts are the Dreams: Bullock, Oglesby and Prather. Oglesby’s face lit up when she performed, and her beautiful soprano and high energy helped to carry the show. Bullock certainly helped strengthen the parallel to The Supremes with her movements and voice deftly showing shades of Diana Ross. She also showed great depth in her journey from wallflower to superstar. Prather stunned as Effie, with her powerful voice filling every corner of the Arts Barn. She also showed great emotional vulnerability as she took a complimentary journey to the one Deena did – starting out as a diva, and growing humbler and centered through the difficult circumstances she experienced. These three were the crown on an already strong cast.

The Arts Barn is a tight space, and directors Kashi-Tara and Kelly Chauncey made use of every inch to bring “Dreamgirls” to life. The costumes were quite impressive in both breadth and quality; there were a huge amount and the fact that the show is a period piece made it extra challenging, but Karen Rawlins was most definitely up to the task. It was an enjoyable rendition of what is sure to become a modern classic.

Advisory: There is a period of strobe lighting and fog is used. Also, be aware that some parts are double cast, so there will be different performers at different performances. Due to some adult language and situations, the show is recommended for audiences 13 and up.