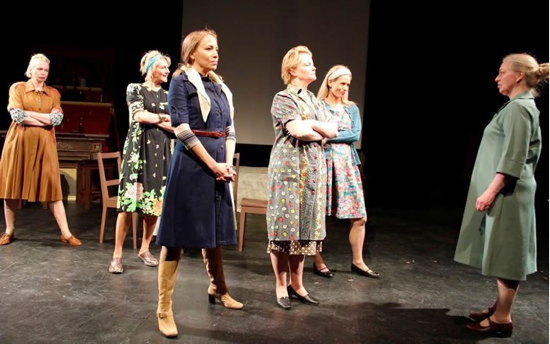 Immigration is central to America’s identity, but so too is discrimination. With each wave of immigrants comes a new wave of intolerance, based on differences in language and culture. But will there ever be a time in American history where we ever forgo this judgemental attitude towards those seeking refuge? Will kindness ever come first, rather than last?

“Fear Eats the Soul” may be set in 1974 Berlin, but the anti-immigrant attitude can still be seen today across modern-day America. With recent executive orders aimed at banning those most in need of a new life, I found Scena Theatre’s production to be extremely timely.

Together the cast and crew demonstrated the beautiful journey of falling in love.

Translated and adapted by Anthony Vivas from the award-winning film by the late Rainer Werner Fassbinder, “Fear Eats the Soul” follows Emmi (Nanna Ingvarsson), a 60-year-old widow, and Salem (Oscar Ceville), a much younger, Moroccan immigrant. They find refuge in each other, but once their relationship is made public, they struggle individually and as a whole to keep the fire alive and well. Neighbors, coworkers and family members stare dumbfounded and/or throw verbal insults at Salem, reasserting his belief that in Germany, “German master, Arab dog.”

The show starts with the cast marching across the stage to a set of chairs on either side of the stage. Every actor’s presence is seen and felt throughout the play. Rather than stepping off stage and into the wings when not in a scene, the actors sit and watch what is unfolding before the audience, echoing disgust in moments of discrimination or laughter in moments of disbelief. Director Robert McNamara’s staging decision also made it particularly easy for the audience to keep track of who played which characters, as both scene and costume changes were visible at all times.

Tension was particularly high when Emmi and Salem found themselves surrounded by her disapproving children and later by judgemental strangers in the park. Repetitive gestures, such as when the neighbors’ exhaled purposely, noses in the air, after crossing Emmi in the stairwell, brought moments of laughter after darker moments.

Nanna Ingvarsson and Oscar Ceville both did a magnificent job portraying the duality of self-doubt and determination one feels during the highs and lows of falling and staying in love. Other notable performances were seen in Colin Devies as Herr Gruber, Emmi’s landlord, and the bigoted Grocer; Karin Rosnizeck as the seductive bartender, Barbara, and Frau Karges; and Jen Bevan as Emmi’s daughter Krista, and new coworker, Yolanda.

Sigrid Johannesdottir’s costume choices were perfect for the time period and appropriate for the variety of characters played. While Lab II seems smaller than other stages at the Atlas Performing Arts Center, Dave Humke made the most of the space. As the show went on, it became easier to follow where the characters went thanks to Denise Rose’s slide projections and song selections. They provided additional context to the continuous movement of chairs, tables and props.

Scena Theatre’s adaptation of “Fear Eats the Soul” was admirable. Together the cast and crew demonstrated the beautiful journey of falling in love.

Running Time: 105 minutes with no intermission.