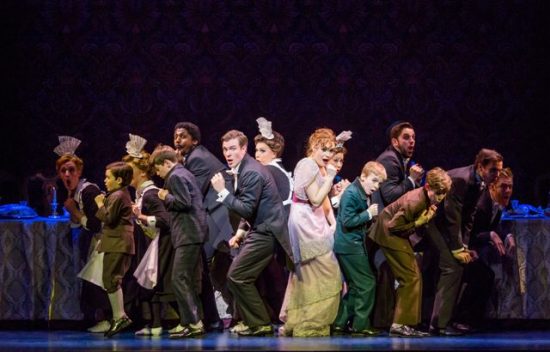 The cast of “Finding Neverland” at the Hippodrome. Photo by Jeremy Daniel.

“The moment you doubt whether you can fly, you cease for ever to be able to do it.”  ― J.M. Barrie, the creator of Peter Pan

The concept of imagination was never more on display than at the Hippodrome’s utterly delightful presentation of the national touring production “Finding Neverland.” With dynamic special effects including fairy dust, gorgeous scenery and costumes, standout music, lively production numbers, and a talented cast under the superlative direction of Tony Award winner Diane Paulus (“Pippin,” “Hair”), “Finding Neverland” tells the heartwarming story of how J.M. Barrie was inspired to pen “Peter Pan.”

“Finding Neverland” is an original musical with music and lyrics by Gary Barlow and Eliot Kennedy and a book by James Graham. It was inspired by the 1998 play “The Man Who Was Peter Pan” by Allan Knee and his 2004 Oscar-winning film adaptation “Finding Neverland” by David Magee.

Though “Finding Neverland” ran on Broadway for 17 months, it never garnered a Tony nomination, much less an award. After seeing it at the Hippodrome, I have to wonder how that was possible given the performances, technical marvels and yes, the story.

J.M. Barrie, who had been struggling to find inspiration for a play, strolls with his dog into London’s Kensington Gardens in 1903 and encounters the recently widowed Sylvia Llewelyn Davies and her four young sons. He quickly is enthralled by the boys’ imaginative adventurous games and bonds with them as well as their mother.

One son, Peter, is not on board yet as he is still grieving the loss of his father and doesn’t want to grow up to face the harsh realities of life. As it turns out, neither does Barrie.

They all become friends much to the chagrin of Barrie’s wife Mary and Sylvia’s mother, the aristocratic Mrs. Du Maurier. The Barries’ marriage is deteriorating, which aids the evolving closeness he develops with Sylvia and his affection he has for his sons.

Meanwhile, theatre impresario Charles Frohman is struggling to mount a successful play for all of upper crust Londoners to enjoy as much as Barrie is struggling to write one. Barrie’s breakthrough is ultimately realized when he creates Peter Pan and Neverland based on the lives of the Llewelyn children and the villain (Captain Hook) inspired by the grumpy Frohman.

“Finding Neverland” takes the audience on a journey that is filled with make believe adventures, joy and laughter. But then some of life’s unfair realities are encountered and melancholy sets in, followed by resolve and optimism.

Handsome Billy Harrigan Tighe puts on a stunning performance as J.M. Barrie. His chemistry with Sylvia and the Llewelyn Davies children hits the mark, which is an integral part of the story.

Mr. Tighe’s gorgeous tenor voice provides superb musicality to the production. He is exceptional in solos, such as “My Imagination,” and “Stronger” but is also enjoyable in duets with Christine Dwyer as Sylvia in “Neverland” and the love ballad “What You Mean to Me.” His duet with Connor Jameson Casey as Peter the night this performance was reviewed in “When Your Feet Don’t Touch the Ground” is especially tender and emotional.

Ms. Dwyer is beautiful to look at and equally beautiful to hear. “All That Matters” and “Sylvia’s Lullaby” are examples of her lovely soprano.

Seasoned veteran John Davidson romps through his role as Charles Frohman, the skeptical theatre producer in desperate need for a successful play. Mr. Davidson competes with the four kids as well as Sammy, the shaggy dog Porthos as a scene stealer and it’s difficult to tell who wins.

A total curmudgeon, Frohman doesn’t care much for kids. One funny impromptu development occurred in the second act of this reviewed performance when Frohman stated rather disingenuously that he likes kids. A youngster sitting in the balcony promptly shouted, “No you don’t,” which caused the audience to erupt with laughter resulting in a pause in the dialogue.  Undaunted, Mr. Davidson let the reaction settle down, and he seamlessly continued his lines.

Mr. Davidson also demonstrated his vocal chops in several outstanding production numbers including “Circus of Your Mind” and “Something About This Night.”

As Sylvia’s gossipy mother, Mrs. Du Maurier, who is resistant to Barrie’s relationship with her daughter and grandsons, Karen Murphy shines in the role.

Comical performances are turned in by Dwelvan David as Mr. Henshaw, Noah Plomgren as Lord Cannan, and Matt Wolpe as Mr. Cromer (the excellent actor) as well as others in the cast.

The Llewelyn Davies kids who form the focus of the story were portrayed ably at his reviewed performance by Colin Wheeler as George, Turner Birthisel as Jack, Tyler Patrick Hennessy as Michael and Connor Jameson Casey as Peter for whom Peter Pan is named after. They even take a turn in producing and performing their own little play that magnifies the cuteness factor.

As proficiently as this production is performed, the technical elements take it to another level. Eye-pleasing scenery was designed by Scott Pask, which changes fluidly throughout.

A large clock fixed at 12:00 appears in many of the scenes. To me, it metaphorically represents how Peter’s and Barrie’s lives are stopped at childhood without wanting to ever grow up.

Kenneth Posner’s lighting design including effective use of projections magnificently works in synch with Jonathan Deans’ sound designed to produce amazing special effects. This is particularly evident in the thunderous “Stronger” that concludes the first act and “Something About This Night” but was also effectively used in other parts of the production.

Charlie Chaplain once said, “Imagination means nothing without doing.”

Go see “Finding Neverland” at the Hippodrome, which is playing for an all—too-brief time.. It is an entertaining, imaginative, well-directed and performed production. Don’t forget to bring the kids.

Running time. Two hours and thirty minutes with an intermission.