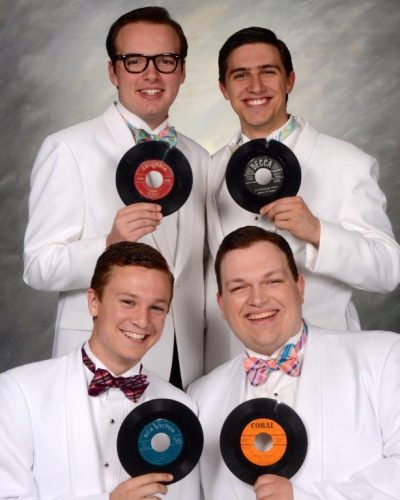 Cockpit In Court Summer Theatre kicks off its Forty-Fifth season with a 1950s flair with their heavenly production of “Forever Plaid,” now playing through June 25th.

The dream of every hopeful musician is to have their music admired by the adoring public.  In the 1950s and early 60s, fresh faced vocal groups like The Ink Spots, The Four Aces, and The Keynotes were a few of the groups that could be considered inspiration for The Plaids.

The talented cast of four includes: Sparky (Ryan Slattery), Jinx (Connor Moore), Smudge (Zachary Miller), and Frankie (Josh Schoff). Each performer has their own distinct character; Frankie’s asthma, Sparky’s speech impediment, Jinx’s nosebleeds, and Smudge’s clumsiness, all of which provides much of the levity that help the stellar cast shine between the superb musical numbers.  The spotlighted songs for each of the performers demonstrate why the casting is perfect for this production and why each actor excels in their own individual performance.

Beside directing a tight show, James Hunnicutt also serves at the Costume Coordinator, bringing together classic white dinner jackets, red bow ties and black pants.  Soon the dream of truly becoming a group is attained by the delivery of their plaid tuxedo jackets.  The show is called “Forever Plaid,” after all.

Set design by Hayden Muller is kept to a minimum with a plaid floor and 4 microphone stands with plaid microphone covers.  The open flooring allows for the cast to walk through the audience providing interaction that both the cast and audience loves.

The musical accompaniment of the 27 songs is skillfully handled by Patricia DeLisle on piano and Bob DeLisle on bass.  A special surprise is when Sparky played “Heart and Soul” allowing an audience member to  volunteer to assist is playing the top piano parts.  The volunteer also had the chance to share comparable dance moves with the remaining three Plaids.

The play is also funny. For example, during “Crazy ‘Bout Ya Baby” the Plaids use plungers instead of microphones.

“Lady of Spain” brings out the variety show element of the Ed Sullivan era of television, including animal tricks, balancing acts, and sword swallowing. Here the performers true showmanship rose to levels well beyond the vocal group introduction.

What I took away from the performance is that the success The Plaids achieved proves that you cannot measure your success against the accomplishments of another. “Forever Plaid” also reminds us to make the most of every opportunity presented since you never know when the chance will be taken away stands true in this heavenly production.

Running Time: Approximately 1 hour and 50 minutes with one intermission.

“Forever Plaid” plays through June 25, 2017 at Cockpit in Court in the upstairs Cabaret Space of The Robert and Eleanor Romadka College Center at the Community College of Baltimore County Essex Campus— 7201 Rossville Boulevard, Essex MD. For more information, visit online.