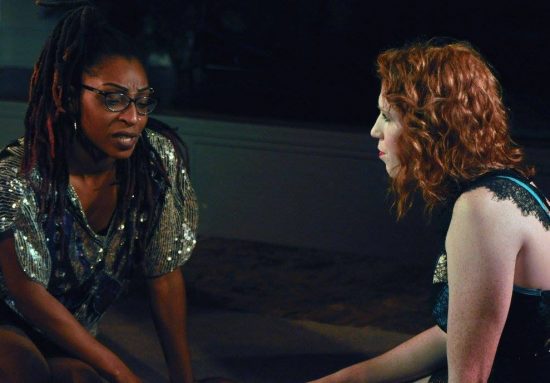 Human trafficking is a topic that comes and goes in the media but is nevertheless a prevalent atrocity in our society. William Leary’s play “Forsaken Angels” reveals some of the horrors involved in a tactful way. The plot follows three young people and how they got in and, lucky for them, got out of the life. Leary also directed the piece.

The first one we meet is Samantha, whose mother and grandmother worked as prostitutes. We watch as young Sam (Sarah Luckadoo) is determined to get out, go to college, and have a normal life. All the while adult Sam (Elizabeth A. Weiss) looks on with knowing sympathy and anger. Jolene (Joanna Matthews), Sam’s mom, is brutal and abusive, and she would do anything for money, even sell her daughter. Luckadoo and Weiss are both incredibly powerful women who demanded attention and showed great versatility. Luckadoo went from a fearful girl to a woman who wouldn’t give up until she got what she wanted. Weiss showed great compassion, anger, sadness, and giddiness which made for a well-rounded character.  Weiss’ monologues were touching and heartbreaking as she looked over the life she had led.

“Forsaken Angels” is a fascinating play that is ultimately about awareness.

The second is Audrey, a girl from an upper-middle class family. Both of her parents have good jobs and are well respected and she has a best friend, Kayla (Brigid Lally) who would do anything for her. Young Audrey (Kelly Richards) is romantic and a little boy crazy so when a cute boy starts chatting her up on Facebook, she gives in. She and her family never thought that Audrey could be the victim and adult Audrey (Tanya Washington) reflects on this over and over. Richards is a remarkable actress, transitioning from a goofy child, full of energy, to a beaten woman, strung out on drugs, and ready to give up. Washington has a smooth sultry voice and delivered her monologues with great direction. Lally played the logical and questioning best friend well.

The last is Alex (Michael Fowle) who came out to his parents when he was 15 and they kicked him out. With nowhere to go, he became an easy victim. He meets Joel (Jordan Lucas Clifford) and falls in love. It isn’t clear that Joel loved Alex, but he does manipulate him into having sex with men for money. Joel works with Keith (Michael Angeloni) as a facilitator, a person who preps young men and women before selling them to a pimp. All three find themselves in the business because of Keith. Fowle is a fearless actor who also worked to command the stage. He was a great partner for Clifford, who gave us hope. Clifford portrayed Joel with just a seediness and just enough heart to make us want something better for him. Angeloni’s character went through the biggest transformation, and he played both ruthlessness and desperation with ease.

Due to the heavy and graphic material in the show, the ensemble had to work very closely. It was clear that everyone supported and trusted each other in order to produce a safe production for all actors.

The staging was one of the most fascinating things. There were four areas down the center, with rows of seats facing each other. This made for some dynamic staging and interesting stage pictures. These four individual stages were designed and implemented by technical director, Stephen Beitzell.

“Forsaken Angels” is a fascinating play that is ultimately about awareness. Many people just don’t know what is happening or what all is involved for the people being trafficked. Just because it isn’t in the media, doesn’t mean it has gone away.

Advisory: Strong language, sexual content, violence, depictions of rape, no one under 17 is admitted without an adult.