Theatre Review: ‘Hedwig and the Angry Inch’ at The Kennedy Center’s Eisenhower Theater 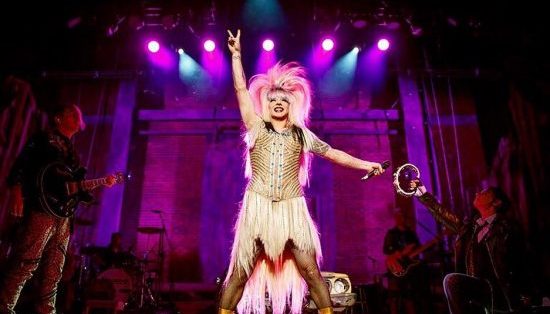 Euan Morton sparkles (both literally and figuratively) in “Hedwig and the Angry Inch,” now playing at the Kennedy Center. Photo by Joan Marcus.

“Oh the thrill of control, like the rush of rock and roll, is the sweetest taste I’ve known.” This lyric, from the song “Sugar Daddy,” hits upon several of the major themes of “Hedwig and the Angry Inch,” the rock and roll concert musical, now playing at the Kennedy Center’s Eisenhower Theater.

“Hedwig and the Angry Inch” is not your typical musical. First of all, it’s performed as more of a concert than a regular musical. In keeping with the concert style, Hedwig (Euan Morton) speaks directly to the audience and you discover the character’s history through a series of monologues. And what a history it is. Starting as a young man in East Berlin, he is convinced by an amorous American soldier named Luther to get a sex-change operation so that they can get married. Unfortunately, the surgery is botched and he is left with an “angry inch.” After being left in a Kansas trailer park by Luther, Hedwig reinvents himself and meets a young man named Tommy. They fall in love and literally make sweet music together, until Tommy discovers what’s between Hedwig’s legs and, repulsed, spurns him. Tommy takes all of the songs that they wrote together and becomes incredibly successful, leaving Hedwig behind.

This is the point in time where the show begins; Tommy is mounting his comeback tour next door, and because of the failure of “The Hurt Locker, the Musical,” Hedwig has negotiated a one-night-only engagement at this reputable theater. Performing along with Hedwig is her band the Angry Inch – made up of (allegedly illegal) immigrants, including her husband Yitzhak (Hannah Corneau,) whom Hedwig treats deplorably. The show is an emotional journey of Hedwig’s attempt to come to grips with what has happened and where to go from there. The end is largely ambiguous – letting the audience bring their own understanding and meaning to the story.

“Hedwig’s” journey to Broadway has been nearly as interesting as Hedwig’s life story. It started as a series of concert gigs played by Book author (and original Hedwig) John Cameron Mitchell, which then developed into an Off-Broadway musical in 1998, running for 857 performances. This led to a film in 2001, also starring Mitchell. There was then a revival production on Broadway in 2014, winning Tonys for best revival of a musical, best actor in a musical for Neil Patrick Harris and best actress in a featured role for Lena Hall as Yitzhak. This revival led to the Broadway tour that has arrived at the Kennedy Center.

This production is visceral in the best sense of the word. Michael Mayer’s innovative and emotional direction grabs the audience’s attention immediately and doesn’t let go. Due to the unique style and staging, the success of “Hedwig and the Angry Inch” is intrinsically tied to the actor playing the lead. Luckily for the Kennedy Center audiences, Euan Morton is more than up to the task. He is at turns red-hot and spicy, heartbreakingly sympathetic and yes, harsh and cruel, particularly to Yitzhak. Morton presents these highs and lows with a raw magnetism and an unabashed sexuality. His performance of the widely diverse song styles is impressive, with the hot rock “Angry Inch” as effective as the touching “Wicked Little Town.” Also, while much of script is set, you can see that they add city-specific riffs and Morton has freedom to ad-lib, specifically heckling the audience. For example, at the performance I attended on Thursday, half of the front row came in late and got a good roasting by a thoroughly non-plussed Hedwig. There was also a jab at a new DC resident about crowd sizes. Audience members towards the front of the stage should be aware that they may become part of the action.

The rest of the “Angry Inch” turned in solid performances, primarily through their expert skills as musicians. Corneau delivers a stellar turn as the long-suffering Yitzhak, starting as a mousy man who is at the mercy of Hedwig and rising like a phoenix from the ashes during the show’s finale, “Midnight Radio.” While she provides strong harmonies throughout and performs “The Long Grift” with a melancholy beauty, she blows the audience away during the final song, both by the change in her appearance and her face-melting vocals. Some show highlights for me were “Wig in a Box,” a personal favorite Broadway tune of mine and the visually stunning “The Origin of Love.” This bedtime story that Hedwig’s mother once told her is portrayed on a psych screen with incredible original animation, while artfully and powerfully sung by Morton. It is one of the most beautiful and unique things I have seen onstage in a long time.

The set fits hilariously into the premise that Hedwig is simply squatting on the abandoned set of the fictional and abandoned “The Hurt Locker: The Musical,” complete with blown out car mid-stage. However, as the show progresses and Hedwig experiences an emotional roller-coaster from recounting her story to the audience, she systematically destroys the set – transforming it into something unique. This almost mirrors the journey of her life that she is imparting throughout the show (Scenic Design by Julian Crouch.) The costumes also tell a story, as both Hedwig and Yitzhak’s personal changes are represented in their wardrobe changes (Tony-nominated Costume Design by Arianne Phillips.) Overall, this production offers both the spirit of the original but also brings new angles to the table; director Michael Mayer is to be commended for creating a show that has equal parts hard-edges and heart.

As much as I adored this production, it is most certainly not for everyone. The music is loud, the lights are bright and the f-bombs are plenty. If you are looking for something classic and standard, “The Sound of Music” is right next door at the Opera House. However, if you are looking to see a ground-breaking, in-your-face and innovative piece of theatre, I highly recommend stopping by to see Hedwig while she’s in town.

Advisory: This production utilizes a strobe light sequence, as well as fog effects. Due to adult language and situations, this production is recommended for audiences 16 and up.

“Hedwig and the Angry Inch” is now playing at the Eisenhower Theatre in the Kennedy Center. Click here to purchase tickets. For more information about the show, please click here.