Theatre Review: ‘How I Learned What I Learned’ at Round House Theatre 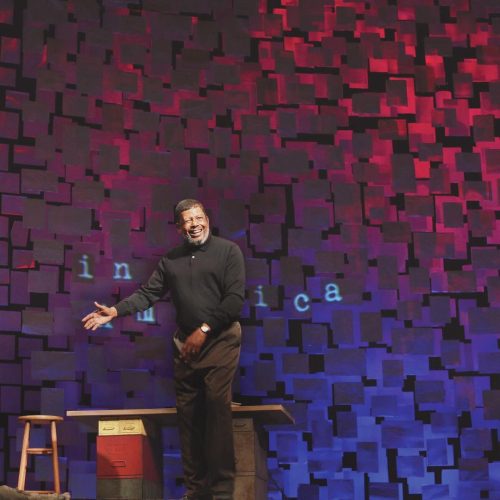 Told as a series of stories from playwright August Wilson’s early years in Pittsburgh, “How I Learned What I Learned” is a poignant and captivating play that was able to capture an entire audience’s attention through just one voice.

In “How I Learned What I Learned,” Eugene Lee as Wilson stands alone on stage, delivering tales of poverty, racism, love and ambition. The stories focus on his experiences living in the Hill District of Pittsburgh in the 1960s as an African-American in his early 20s. The play provides a glimpse of the prejudices and challenges that still exist and are still relevant today.

It is a play that feels important, not just for its message or timeless relevance, but also for its intricacies, its eloquence and its charm.

Lee delivers a stunning and intricately layered performance as Wilson. His voice is as smooth as butter, melting over each line and making Wilson’s eloquent prose feel as silky as it sounds.

Lee’s voice was made for the stage, with its strong presence and malleability. He wasn’t afraid to adapt his voice for comedic effect, letting the tone get higher and higher and even screeching slightly at times.

Though he was the only one on stage, it never felt as though the play was lacking or needed others to tell the story. Each tale Lee wove was vibrant and came alive through his words, gestures and intonation. Despite having almost two hours of lines to memorize, Lee never tripped up and delivered a flawless performance.

“How I Learned What I Learned” is smartly divided into distinct sections each with its own title. Watching the play was very much like reading a memoir, complete with the sound of a typewriter as the title of each “chapter” was displayed.

The set told as intricate a story as the play itself. The majority of the stage was transformed into a sort of junkyard with random items strewn throughout the sand-covered floor. Rising from this seeming mess was a platform upon which sat a coat rack, a desk and a stool. Serving as the backdrop for all of this was a striking curtain of sheets of paper.

Though the set looked haphazard, everything had a purpose. Upon reading the program, I learned that each item on the set was a reference to one of Wilson’s works, making the entire set a tribute to him.

The play borrows from stand-up comedy as well as memoir to create something unique and poignant. It is a play that feels important, not just for its message or timeless relevance, but also for its intricacies, its eloquence and its charm.

I was not very familiar with Wilson or his repertoire before seeing this play. He has depicted the African-American experience through a series of 10 plays and I have found him to be an insightful and talented playwright. He has won numerous awards, including a Tony and two Pulitzer Prizes, and it is not hard to see why.

Wilson was only able to perform “How I Learned What I Learned” himself once before he died. I believe he would be proud of the work that Lee, director Todd Kreidler and the rest of the creative team have done for his legacy with this production.

“How I Learned What I Learned” runs through July 2 at Round House Theatre in Bethesda, MD. For more information, click here.