Theatre Review: ‘Jean and Dinah… The Play’ by The Essential Theatre at the Undercroft Theatre 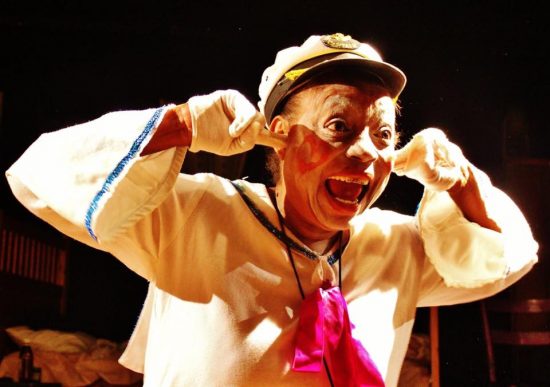 Jean (portrayed by Penelope Spencer), is an aging prostitute who, at this particular moment in time, wants nothing more than to play masquerade on Jouvay morning with her dear friend of forty plus years, Dinah (who may or may not be an aging prostitute as well). Unfortunately, Dinah (Rhoma Spencer) has decided that she does not want to participate in this year’s Carnival celebration. As Jean does everything she can to coax Dinah out of bed, she and Dinah uncover truths about their pasts that were long forgotten albeit heavily prevalent within their everyday lives.

…I literally loved every second of it.

Act I takes place in Dinah’s Port of Spain, Trinidad apartment in the early ‘90s and consists mostly of the two friends reminiscing about past events that helped shape them into the women they’ve become. Act II takes place on a street and in a hospital (also in Port of Spain) during the decade that followed World War II. Interestingly enough, Act II allows audience members to witness the very moments Jean and Dinah mused about in Act I as the actresses have transformed into their younger selves (forty years younger to be exact).

There’s a particularly memorable scene in Act II in which Jean walked around the theatre in order to ask audience members if we knew a particular child (whom she carried in a small box in her arms). As audience member after audience member admitted to not knowing the child (which in all actuality was a doll), she recited a beautiful monologue in which she charged men (and women) with the task of being present within their son’s lives. It was later revealed to us that we did, in fact, know the child; he was our brother, our friend, our cousin… Our son. As it must be taken into consideration that this production was written in 1994, Tony Hall’s prophetic words ring eerily true in 21st century America as, if our sons continue to remain unguided (considering the current political landscape with which we find ourselves), there will inevitably be “more sons to hang next to pop.”

Set designer Roger Hicks did a wonderful job of utilizing a few well-placed, meticulously selected materials in order to portray the type of lifestyle Dinah (and most likely Jean as well) lived; if the Mighty Sparrow’s words were true, and many Trinidadian women did gain monetary compensation due to their relations with the American troops, then the absence of that monetary support must have devastated many, if not all, of the women who were affiliated with said troops. It must also be noted that the live music, performed by the Rhythm Man (Modupe Onilu), was integral to the production’s effortless fluidity. (Although I wouldn’t consider “Jean and Dinah… The Play” to be a musical, there were a few scenes of the production in which the actresses [and audience members] were called to sing).

“Jean and Dinah… The play” is unapologetically Trinidadian and I literally loved every second of it. That being said, there were a few West Indian colloquialisms that I failed to catch and I, inevitably, missed a joke or two… Or three (it was clear I missed the joke when the West Indian audience members erupted in laughter), but that’s neither here nor there. “Jean and Dinah… The Play” is a wonderful production and is highly recommended for all [persons 18 and older] to see.

“Jean and Dinah… The Play” runs through June 18, 2017, at the Undercroft Theatre housed within the Mount Vernon Place United Methodist Church in Washington, D.C.* For tickets and more information, click here.