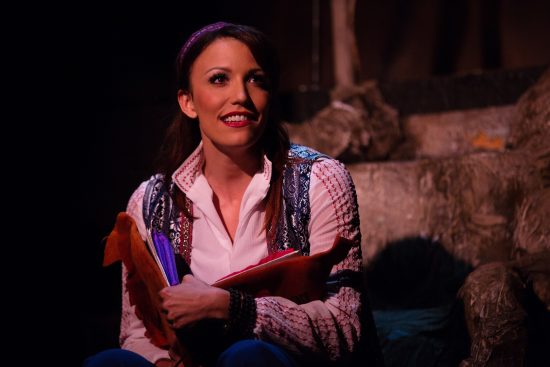 The very first musical that I saw as a child was Andrew Lloyd Webber’s “Joseph and the Amazing Technicolor Dreamcoat,” performed in a church basement by their youth group with simple staging and so much enthusiasm. I fell in love with the show then and it has remained my favorite show to this day, so what a treat to get to see such a top-notch performance at Toby’s Dinner Theatre in Columbia, MD, featuring Broadway star Caroline Bowman, no less!

Whether it’s your first time seeing Joseph or you know the show by heart, you will fall in love with the new musical arrangements and extended dance numbers that ramp this show up to a new level of creativity and entertainment.

In honor of the 50th Anniversary of Columbia, MD and the 45th Anniversary of Artistic Director Toby Orenstein’s drama school The Columbia Center for Theatrical Arts, Toby’s has not one narrator performing the iconic role throughout the run, but five – and what a way to start off the production on opening night, June 15, 2017, with Columbia-native Caroline Bowman, who has played Elphaba in “Wicked” on Broadway and was in the original cast of “Kinky Boots” but who was a Toby’s performer prior to starring on Broadway.

From the second the lights went up, Bowman drew me in as she gazed lovingly upon her beloved book where the story of Joseph was written. I could tell that this was a story that her character cherished and wanted to share with us because it had personal meaning to her. I also appreciated how Bowman made eye contact with several audience members as she continued to sing, drawing us into her performance.

Bowman’s voice is phenomenal and I loved how she put her own flair on each song, choosing what words to emphasize or adding a few unexpected runs in to catch our attention. As someone who has listened obsessively to the original Broadway cast recording for over 20 years, I really enjoyed hearing the songs done differently than the way they’ve been ingrained in my memory and it made the evening feel fresh and delightful every step of the way. Caroline Bowman will be in the role of The Narrator through June 23, 2017, and I highly recommend that you do not miss her!

The production is so enchanting, though, that I’m sure you’ll also want to come back to enjoy the other narrators’ performances, not to mention to enjoy the exceptional dinner that Toby’s puts on prior to the performance. At Toby’s, patrons are assigned a table when they purchase their tickets and depending on the number in your party you may have some new friends seated with you as the tables seat 4-8. A small line formed in the lobby prior to 6 p.m., when the dinner opened for this performance, and we were assigned a buffet number in order of our entrance.

The host called the table numbers up to the hot buffet in turn to avoid overcrowding, and this caused the buffet line to move along quite quickly and it wasn’t long before all tables were served. There’s a delicious fresh salad bar to enjoy while you’re waiting for your table to be called for the hot items, so you won’t go hungry and I wouldn’t advise feeling pressured to arrive early to get a “good number” for the buffet as there’s plenty of food and you won’t be waiting long to eat no matter when you arrive.

Alcoholic drinks are available for purchase at your table, but the cost of dinner is included with your ticket. Do plan to tip your server, however, as the actors wait your tables and depend on their tips as income to allow them to put on our fabulous show! Toby’s recommends a minimum 15% tip on top of the price of tickets plus extra drinks so make sure to budget for that.

As far as the food, I was absolutely over the moon about the baked fish, the sautéed carrots and squash, the roasted potatoes, and the green beans. Honestly, I have never enjoyed fish as much anywhere, even at seafood restaurants, as much as I enjoyed this dish at Toby’s. The carrots and squash also blew me away because the carrots were cooked to tenderly melt in your mouth without being mushy and the flavoring was unexpected and delicious. The chef should have had their name listed in the program too because they were seriously a big star of the evening. I don’t eat meat aside from seafood, but my tablemates enjoyed the carving station and also said that the BBQ ribs were cooked really well. There are plenty of options for vegetarians on the menu and the buffet includes a cheese and fruit station, coleslaw, seafood pasta salad, and shrimp cocktail in addition to the many vegetable sides and meat entrees. For dessert, we were offered a choice of chocolate cake or cheesecake and there was an ice cream sundae buffet with all the fixings.

As I stated, the show drew me in from the narrator’s first notes. For those who might not be familiar with the musical, “Joseph and the Amazing Technicolor Dreamcoat” tells the Bible story of Joseph and his 11 brothers. Joseph’s brothers are jealous of him because he is his father’s favorite so things get ugly. No spoilers, but a lot of the play is set in Egypt which you’ll find out as soon as you walk into the theater and see the Sphinx statue and Egyptian hieroglyphs surrounding the stage. Don’t worry, though, despite the brothers’ misdeeds this show is totally safe for kids! And, it has a happy ending.

Wood Van Meter plays Joseph and I absolutely loved his interpretation of the character. I’ve seen many different portrayals of Joseph over the years (remember, this is my favorite show so I’ve seen a lot of productions!) and some of the portrayals have felt off. Not so with Van Meter! He played Joseph as if Joseph is an innocent little kid who’s happy-go-lucky and loves his dad and has some weird dreams that he doesn’t suspect will irritate his brothers.

I’m a huge nerd and for any Flash fans out there on the CW, Van Meter really gave me a lot of Barry Allen’s innocence and joy and it says a lot about the brothers that they could find it in themselves to hate such a cutie-pie. Van Meter has an excellent voice and his facial expressions are fabulous as well, especially during the “Benjamin Calypso” number when he’s scoffing at his brother’s assertions.

Speaking of the brothers, their facial expressions and body language and dancing were incredible. Not many of them have featured solo numbers, but they all compete to steal the show as they portray their contempt for Joseph at the beginning of the show and then break into fabulous dance numbers. Their hip action was a show highlight, especially on the song “Joseph’s Dreams.”

One of my favorite brothers was DeCarlo Raspberry as Naphtali who performs the “Benjamin Calypso” solo. He went from gravelly low notes to a super falsetto and his acting and dancing was as amazing as his voice. Also, watch for Gregory Banks as Levi in “One More Angel” and Russell Sunday as Reuben in “Those Canaan Days.”

The Women’s Ensemble also brings the moves and the vocals, providing all kinds of back-up from the brother’s wives to Egyptian guards to Vegas-esque showgirls. Kudos to the sopranos because every single high note, of which there are many, was flawless and gave me chills. I thoroughly enjoyed David Jennings as Pharaoh. Let’s just say that his voice was a perfect imitation of… somebody you’ll recognize. As were his dance moves!

The choreography by Mark Minnick (who co-directs along with Toby Orenstein) was truly fabulous throughout the show and perfectly got the style of each song. One of the most impressive aspects of this show was the new musical arrangements of many songs done by Musical Director Ross Scott Rawlings. Again, I am someone who knows this show inside and out and I adored the new twists on each song.

Rawlings really grasped the musical style of each song that Andrew Lloyd Webber hinted at, and he took it to the next level. For example, “Jacob and Sons” breaks out into a Gospel church moment. “One More Angel” turns into a full-on hoedown. And “Go, Go, Go Joseph” captures the 60’s go-go vibe exquisitely. For the younger people, think Austin Powers turned way up. I don’t want to spoil my favorite moment for you, but there’s a special effect moment that was so 60s that I about fell out laughing.

The new arrangements allowed for so much more dancing and choreography and it also allowed the orchestra members to really shine on some fun solo riffs. My especial favorite were the trumpet solos and runs by Tony Neenan. The costumes designed by Lawrence B. Munsey were also perfect. I loved that the narrator’s costume hinted at Joseph’s coat as it connected the idea that this was a story that was deeply inspirational to her.

I highly recommend “Joseph and the Amazing Technicolor Dreamcoat” now playing at Toby’s Dinner Theatre in Columbia, MD. Whether it’s your first time seeing Joseph or you know the show by heart, you will fall in love with the new musical arrangements and extended dance numbers that ramp this show up to a new level of creativity and entertainment.

Running Time: Approximately 2 hours, with one intermission. Dinner precedes the show for an additional 2 hours.

Joseph and the Amazing Technicolor Dreamcoat” is playing through August 27, 2017, at Toby’s Dinner Theatre in Columbia, MD. Caroline Bowman appears as the Narrator through June 23, 2017. For more information, click here.