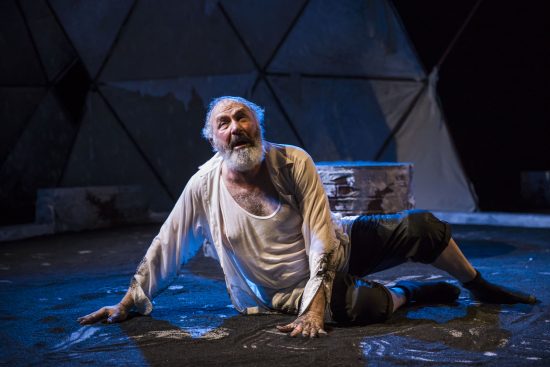 “By the time you’re old enough to play it, you’re too old to play it,” is a sentiment surrounding actors who tackle the prestige role of King Lear. I’m delighted to say it does not apply to Rick Foucheux and his visceral performance in Avant Bard’s stunning new production of Shakespeare’s “King Lear.”

Foucheux headlines the new iteration of the very old story. King Lear (Foucheux) divides his kingdom between his three daughters, Cordelia (Kathryn Zoerb), Goneril (Alyssa Sanders), and Regan (Charlene V. Smith). To make sure they’re worthy of the gift, he tests their loyalty, which Regan and Goneril pass using flattery, and Cordelia fails, ending in her banishment to France, despite objections from noble Kent (Vince Eisenson). Looking forward to a pleasant retirement, Lear instead finds that his two remaining daughters are unwilling to accommodate his wishes. Displaced from power, and his home, he wanders, leaning on friends in the form of the Fool (Christopher Henley) and Gloucester (Cam Magee).

Foucheux’s portrayal of Lear is symphonic in its emotional layering. In the incredibly physical performance, he acts Lear’s tragedy with his whole body. Stalking on stage at the beginning, comfortably royal, he dissolves into stomping rages, and eventually shuffles and crawls during his child-like interlude of insanity. Foucheux brings out the melody of Lear’s poetry, as well as his full emotional vulnerability: an angry tirade can trail off into tears.

…a stirring, magnificent curtain call for an actor at the peak of his powers.

Under Tom Prewitt’s direction, the production underlines the family in family drama. Lear’s emotional tirades and insistence on having everything his way throw his daughters’ frustration into an almost sympathetic light. Alyssa Sanders and Charlene V. Smith stand out as Goneril and Regan, portraying the sisters less like cold-blooded co-conspirators, and more like frustrated caretakers (initially, anyway). “I am a man/ More sinn’d against than sinning,” claims Lear. Here, this truth, like this family, is complicated.

The central players are supported by an excellent cast. Christopher Henley is phenomenal as the Fool, whose physical characterization of the innocent but wise companion has all the precision of a dancer. Cam Magee is both elegant and commanding as Gloucester; the decision to cast a woman in the role works very well here, as Magee brings a measured and maternal energy to the role. It also adds an interesting texture to the relationship with the character’s illegitimate and resentful son, Edmund, played with exhilarating vitriol by Dylan Morrison Myers. His bitter monologues are some of the highlights of the first half.

The action takes place against a minimalist, but striking background. The intimate set, courtesy of Jonathan Dahm Robertson, seems outside of time, bare and minimalist, backed by tarp covered frames that look like flying machines crashed to earth. Elizabeth Ennis’s costumes are similarly unrestricted by period; gold brocades pair with leather pants. Combine these elements with Justin Schmitz’s urgent, sometimes sinister, tonal soundtrack, as well as John D. Alexander’s moody lighting, and the effect is simultaneously dystopian future and primal past. You get the sense that all of this has happened before, and will happen again.

The second half keeps the energy high even as the lights get darker and the action bloodier, courtesy of Casey Kaleba’s fight choreography. Nevertheless, interludes with mad Lear are just as captivating as the plotting and backstabbing. Lear’s reunion scene with the blind Gloucester is especially affectionate and affecting, a moment of solace in what becomes a war-torn, and ultimately tragic, story.

In tandem with Lear, Rick Foucheux is also coming to the end of a chapter; he has announced that this production will be the last before he retires. As such, it is a stirring, magnificent curtain call for an actor at the peak of his powers.

Running Time: About 2 hours and 45 minutes with a 10-minute intermission.