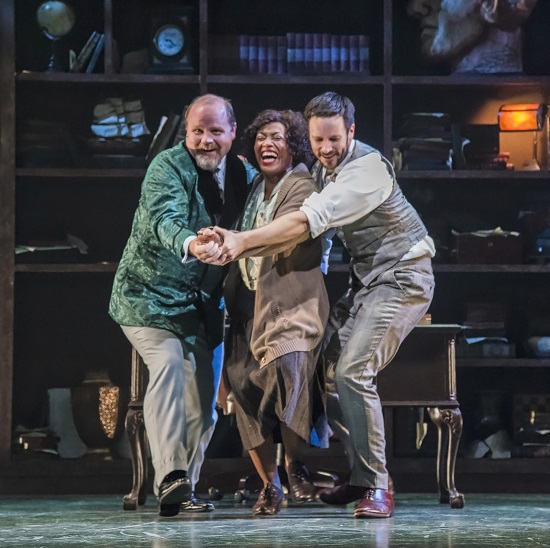 What is your favorite musical?  For me, it happens to be “My Fair Lady.” When I heard that Director Alan Souza​ was re-envisioning Lerner and Loewe’s s award-winning adaptation of George Bernard Shaw’s play “Pygmalion” for Olney Theatre Center, I was curious to see if I would still enjoy my favorite musical, despite the changes.

Director Souza says that “This is a “My Fair Lady” told for a modern audience. In a time when our rights are being questioned daily, we are moving the play to 1921, which is just as women gained suffrage in England. Suddenly the classic battle of wills between Eliza and Higgins takes on new dynamics and greater resonance.”

Set in London in 1921 instead of 1912, the story is about a Cockney flower girl named Eliza Doolittle who learns how to speak proper English with the help of Henry Higgins who is a professor of phonetics.

Olney Theatre Center’s production of “My Fair Lady” is a fresh, hot, and deliciously satisfying re-envisioning of Lerner and Loewe’s classic.

The casting of Danny Bernardy as Professor Henry Higgins brings to the character a much younger portrayal than I’ve seen, bringing with it a different dynamic between teacher and student.  The deliberate staging of Eliza and Higgins, often face to face, gives the appearance that they are in a boxing ring about to fight. Yet, it is in those moments that there is also an undeniable romantic chemistry between the two.  Danny Bernardy takes command of the stage (and Eliza) as he speaks each word clearly, as you might expect from a professor of phonetics.  His highly charged interpretation of the role brings to light that Higgins does in fact have respect for strong women like his mother, despite belittling Eliza and ranting about women.

Brittany Campbell is Eliza Doolittle, the Cockney flower girl who says that she wants “to be a lady in a flower shop stead of selling at the corner of Tottenham Court Road. But they won’t take me unless I can talk more genteel.”  She may sell flowers, but Brittany Campbell as Eliza is as tough as nails.  She is a fighter, has goals of bettering herself, and never gives up.  Campbell also has a sweet, lighter than air side as showcased with her warm, resonant singing voice, stopping the show with the song “I Could Have Danced All Night.”

If any actor understands the art of delivering humor in a line, it’s Todd Scofield in his outstanding portrayal as Colonel Pickering, a retired British officer with colonial experience and the author of “Spoken Sanskrit.” Chris Genebach is by far the most rugged dustman by the name of Alfred P. Doolittle I’ve seen on stage; strict with his daughter and feels entitled to a portion of anything that is hers.   In contrast, Benjamin Lurye is all sweet for Eliza as Freddy Eynsford-Hill.   The audience really enjoyed Benjamin’s no holds barred vibrato and schmaltz with the iconic song “On The Street Where You Live.”

Choreographer Grady McLeod Bowman is at his best with Alfred P. Doolittle’s songs, “With A Little Bit of Luck” and “Get Me to The Church On Time.”   The ensemble gets to show off some fancy dance steps all while telling the story behind these classic musical numbers.

Though you can’t see the musicians, the eleven piece orchestra, musically directed by Christopher Youstra and conduced by Andra Velis Simon, has never sounded better.  Most joyous to hear is Kristen Jepperson on harp and Madeline Watson and Jeffry Newberger on violin.  Let’s also not forget about the rich vocal harmonies performed by the hard-working and talented ensemble.

Scenic Designer James Fouchard gives the home of Henry Higgins a wall filled with phonetic symbols with example words.  A bookcase going up as far as the eye can see is filled with the passions of Higgins, including books, a bust with sections marked off of the brain, and phonographs to play recordings of the voice.  Other sets, like the bedroom of Eliza are more sparse, yet surprisingly effective; just a bed and a backdrop of stars.   Two movable and functional circular boxes are used creatively throughout the play as seats and tables.

The costume designs are also meant to have you look inward, psychologically speaking.  For example, Eliza’s first test at Ascot, Costume Designer Pei Lee says, the “costumes in the whole scene literally represent her emotional psyche at the time: everything is vibrant and overwhelming.  She’s nervous and excited; everything is oversaturated and more stylized and over-the-top.  The hats are big and if you look closely, they’re sort of phonetic symbols, and they’re there to remind Eliza not to screw up…”

Overall, I would have to say to Director Alan Souza, “Tonight, old man, you did it! You did it! You did it! You said that you would do it, And indeed you did. I thought that you would rue it;
I doubted you’d do it. But now I must admit it that succeed you did.”  Seriously, I understood and enjoyed “My Fair Lady” in a new and expanded way.  Olney Theatre Center’s production of “My Fair Lady” is a fresh, hot, and deliciously satisfying re-envisioning of Lerner and Loewe’s classic.  Let the battle of the sexes begin.

Running Time: 2 hours and 40 minutes, with one 15-minute intermission.

Advisory: “My Fair Lady” is recommended for ages 10+ due to the length of the production and some situations with adult language.