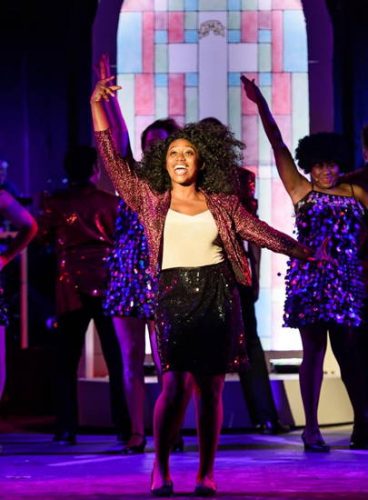 Foot tapping fun with some unforgettable deep belly laugh moments from this talented cast as “Sister Act” hit the stage at the Annapolis Summer Garden Theatre.

You will remember the blockbuster movie starring Whoopi Goldberg while the stage version is just as much fun, it is different from the on-screen version. The stage version, written in 2006 by Alan Menken. Director Claire Shaffer and Musical Director Paige Rammelkamp just raised the bar with these sisters with voices.

Before we delve into the eccentric evangelic euphoria in this show, I want to talk about the venue. The Annapolis Summer Garden Theater is a gem situated in the heart of the harbor in Maryland’s capital. There couldn’t have been a more perfect night to sit outside and enjoy temperatures in the upper 70’s clear skies and the great acoustics this theater company creates in this open air venue.

The lighting rig hovers over the audience while there are additional lights and a tower like a sound booth at the rear of the venue, military style which given the location is very apt.

Kanysha Williams plays Deloris Van Cartier – you know Cartier like the jewelry (sorry inside joke) the struggling nightclub diva may be flashy and brash, but she has an abundance of talent and sass. I couldn’t take my eyes off her through the entire performance. At times level of her vocals early on were hard to hear, and throughout the show, there seemed to be moments when the actor’s mics were not on for the first few seconds of dialogue and song. I am sure this will be cleaned up as the run progresses.

Williams’ backup singers who play other roles throughout the show were the perfect compliment in creating smooth three part harmonies and embracing the swing out sister back up roles. Jasmine Jones plays Michelle, and Emily J. Sergo plays Tina, and they rocked it!

Williams falls for and then flees from her mobster lover Curtis played by Theodore Sapp.  She is then taken by an old high school crush ‘sweaty’ Eddie now a Cop played by Josh Mooney to seek a hiding place in a convent.

The very debonair and handsome Sapp needs a little more Gangnam in his gangster role – I thought he would be directed to be tougher as the villain.  However, when he hits the spotlight to sing his velvet tones are an absolute delight.  A smooth mixture of Lionel Richie and Barry White – the voice, not the looks – no offense guys but Sapp has it going on in that department.  He along with Greg Jones Ellis who covers the role of Ernie and a role with more longevity in Monsignor O’Hara were very hard to hear in the opening scenes as the microphone levels were very low.

Sapp is assisted in his less than favorable lifestyle by his version of the three stooges in the form TJ  played by Kyle Eshom a simple young man with great comedic timing Joey played by Jeff Hawkins and Pablo played by Daniel Santiago. The guys do a great job backing up Sapp as he belts out “When I find my baby” vocally robust and playing up their less than polished dance moves temptations style, I can’t help but hope these guys will be part of the next show to be performed at the theatre “The Full Monty” — get your tickets now folks!

Josh Mooney steps up to the plate in a “Mr.Cellophane” moment with his rendition of  “I could be that guy” shirking off his sweaty (not in a hot way) geeky image and giving the audience a little sexy smile with his hips moving through a very strong vocal performance.

The nuns are outstanding in the casting, the singing and their dance routines which are carried out with style and funk developing their characters from the start. There are lots of strong characters and a great blend of voices that makes this show a must-see.

Not to be mispronounced Rachel Perry plays ‘postulant’ Sister Mary Robert a shrinking violet but don’t be fooled this young lady has a bellowing strong voice with wonderful tone and intonation.

Jaunty Sister May Patrick played by Kylie Airin Sjolie is an absolute hoot and delight to watch holding on firmly to her funny character throughout. Traci Denhardt plays Sister Mary Lazarus another great voice and a fun character.

Despite her sour nature Debbie Mobley who plays Mother Superior starts to tolerate the raunchy rocker Van Cartier. Mobley does a great job with ‘inside these walls’ her voice a contrast to the other sisters as she holds on to her more serious role.

All this and a live band. The band sits on the large stage behind a very practical and straightforward set that transforms from a police station to a night club to a convent all with a spin. The lights help to change the mood and scene not always easy with bright summer nights in an outside venue, and the costumes were appropriate and so much fun. Stephanie Bernholz and Martha Nell Fox adding to the sisters with style.

Advisory: This show has some adult themes.