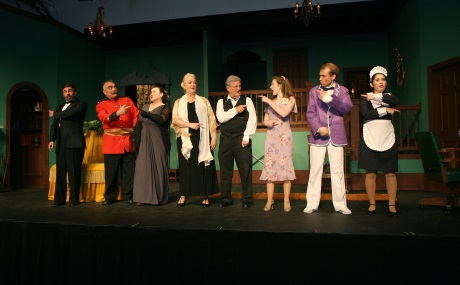 Not since I saw David Hyde Pierce in “Curtains” have I laughed harder at a who done it hilarious musical murder mystery. This one required no travel and a lot sweeter to my wallet. “Something’s Afoot,” presented by the British Players at the Kensington Town Hall Theater, was a great treat on a hot Washington evening. This musical opened on Broadway in 1976. Written and scored by James McDonald, David Vos and Robert Gerlach, the lyrics are fast and cleaver.

“A Marvelous Weekend,” with complicated choreography that usually flummoxes even the most professional of performers, is performed expertly by the excited cast. And the cast is not a group of twenty somethings! Choreographer Kay Casstevens deserves a standing ovation for this toe tapping endeavor. The marvel of dance is only surpassed by the choreography of the murder weapons. Property designer, Cheryl Lytle along with Motion Control and Effects Design of Phil Railsback along with a huge production staff of brilliant and villainous helpers of the murderer drop sconces, electrocute on cue and pop up to shoot poison arrows with precision timing. The production is further enhanced by the Sound design by Matt Mills and Costume Design by Nicola Hoag. And lets not forget Producer John O’Leary, director Chrish Kresge, and Music Director Charles Hoag who helped to make this is a fun family show that can be enjoyed by people of all ages.

We sit in the audience and know that the show is attempting to bamboozle us. We think to ourselves, “we will figure it out.” Folks, I guarantee you won’t see this one coming! Blindsided! Located on the island estate during a severe storm and flood, several guests (and an uninvited one), each thinking they are the only guest of the wealthy Lord Dudley Rancour, deviously played by Colin Davis. One by one they begin to disappear. How it happens? Well sorry folks, I am not going to tell you!

The staff, darling Miss Lettie, played by Amanda Dullin-Jones and Flint played by Malcolm Edwards, along with Clive brought to life by John O’Leary all continue to give excellent service despite the fact the guests and staff are dropping like flies. We were promised a murder mystery, after all. Perhaps Miss Tweed an older fan of Agatha Christie, played by Missi Tessier (which sounds a lot like MYSTERY when combined with a British accent) will give us some help unraveling this who done it?  Miss Tweed, in addition to being an amateur detective, has the command of narration, the gift of song, dance, and comedic timing. I was completely in love with her performance.

What is a musical without a love story? We meet the beautiful lithe Miranda Austin Tharp playing the ward of the mansion, Hope Langdon. A trained dancer, our choreographer utilizes her talents to their fullest. Joe Lilek, plays young Geoffrey, the college rower thrown into the lake and soaked due to a boating accident. He also happens to have a gun (the racing starting gun he says).  Sweet and lyric, while murders are afoot, the little lovebirds sing and dance of their desires. But not before tying him up. Mr. Lilek possesses a magical tenor voice and everyone knows the tenor can never be the murderer, especially when their voice is so alluring. Or can they?

Every British show needs a little military stuffiness, and that is brought brilliantly to you by Colonel Gillweather, played by Allan Brown, a moustached member of the British Navy. Stephanie Wesley plays the sexy Lady Grace Manley-Prowe, with luscious dignity, a bit diva, but mostly vamp. Nigel Rancour, heir to the throne, played by the devilishly adorable (if he must say so himself) Ken Kemp is searching the mansion while people continue to be killed.  This is live theatre folks and sometimes things really do happen, the evening I attended, Dr. Grayburn  was brought to life, albeit for a short time, by John Allnutt, the understudy.  I am always amazed that someone can in a moment’s notice get on the stage and deliver their lines. One of my favorite moments was the singing of “The Dinghy Song.”  This is a must-see!