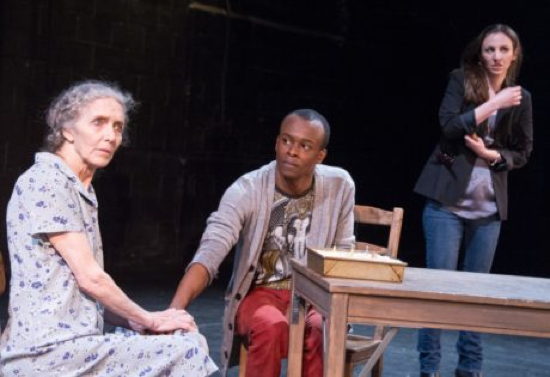 Gathering in the lobby of the Anacostia Playhouse, we waited for the box office to open as a mix of alternative and country music played over the speakers. Instead of tickets, we were given slips of paper stating the “rules” of the performance and dividing us into small groups. Every two minutes a group was called to enter the performance space. However, instead of walking directly into the theatre, we exited the building and headed to a nondescript stage door a few yards away. Opening the door revealed a beaded curtain—the beginning of our exploration of the Fisk family’s private life. One by one we filed into the maze of the black box theatre and the enigma of the Fisk’s world.

Pitched as “a new immersive theatrical experience,” “Still Life with Rocket” blends dance, acting, and visual art to explore the dynamics of the Fisk family. As Etta Fisk (Annie Houston), a former boxer, deals with her aging and memory loss, her four adopted children gather for a family reunion of sorts. Yet, as they deal with their past and their mother’s uncertain future, a tragedy they have tried to ignore surfaces once again.

“Still Life with Rocket” is easily one of the most innovative pieces I have seen in the D.C. area recently.

Although “Still Life with Rocket” was conceived and directed by internationally acclaimed writer and director Mollye Maxner, she describes its development as “a thoroughly collaborative, generative process.” Performers, design team, and crew members were encouraged to bring their ideas to the table, an investment that was visible throughout the performance. Each art form melded seamlessly with the others, creating a coherent picture through seemingly incongruous parts. Collages filled with quotes and images covered the walls on the way to the main stage. They explored the connection between mankind and space and foreshadowed the Fisk family’s irregular conception of time.

Nathan’s (Justin Weaks) rap about space and perspective further this preoccupation with separation and time. Onstage, the dancers (Devinne Cook and Kate McFalls) performed a modern dance boxing match, exhibiting both antagonism and partnership that mirrored the family’s struggle. Caleb (Ben Gunderson) repeated this sports leitmotif in his dance in front of his siblings where, like with boxing, he struggled to prove himself. Mollye and Kelly Maxner’s choreography, complemented by the performers’ styles, furthered carried the story and blurred the lines between the past and the present. The various forms of expression explored the depths of the family’s love and pain from different angles, immersing the audience in the emotions of the performance instead of leaving them on the sidelines.

In addition to the different art forms that invited the audience into the piece, the actors all committed to their characters, showcasing their pain and allowing the audience to get to know them. Justin Weaks as Nathan and Annie Houston as Etta gave the two strongest performances. Weaks’ physical energy, as well as his vocal modulation and speed, perfectly portrayed both Nathan’s youthful innocence and strength while also alluding to his existence within himself. Houston communicated through Etta without much scripted dialogue. Her performance was daring and immersive, bringing the most poignant piece of the performance—the slow loss of the family matriarch—into focus. Ben Gunderson as Caleb gave his character depth and conflict. Although he could have reduced Caleb to his past mistakes, Gunderson refused to make Caleb one-dimensional. Gunderson allowed Caleb’s struggles to garner sympathy and confusion, rather than simple disgust.

Finally, Jared Shamberger and Teresa Spencer as Cyrus and Tracy made the Finks into a family. Juxtaposed with Nathan’s deep ruminations and Caleb’s annoyingly persistent impishness, Cyrus and Tracy seem simple, almost as though they are not fully developed. Though their backstories are alluded to, they seem to exist more to demonstrate the family’s pain than to be characters in their own right. However, Shamberger and Spencer take power in their characters’ comparative normalcy. Their characters are less eccentric but more believable. Their pain could be our pain more than Nathan’s or Caleb’s could. Together, all five actors are necessary for the exploration of the Fisk family’s relationship with joy and heartbreak.

In addition to the phenomenal acting and dance, “Still Life with Rocket” was successful thanks to its set (Andrew Cohen and Patti Kalil), lighting and projections (William K. D’Eugenio, Kelly Colburn), and sound (Matthew M. Nielson and Tosin Olufolabi) designs. The minimalist main set was juxtaposed with the elaborate detail of the adjacent rooms backstage. On the way to the main performance space, the audience saw remnants of discarded past lives and the chaos of the overwhelming present. Every detail was carefully planned, and hundreds of props and set dressing items littered the rooms. Conversely, onstage a few pieces of furniture built everything from a family meal to a mountain. The light and sound complemented both the chaos and simplicity. Spots and fading lights set the mood and built forests and even galaxies, while the original music by Nielson and the other, smaller sound additions filled in plot points the audience may have otherwise missed.

“Still Life with Rocket” is easily one of the most innovative pieces I have seen in the D.C. area recently. Its subtleties and shrouded storytelling require more active participation and thought from audience members than most shows, but the poetry and emotional payoff is worth every second. Over the course of the performance, “Still Life with Rocket” uses different art forms to acknowledge the complexities of our humanity. As is expected from powerful theatre like this, “Still Life with Rocket” leaves you searching long after you’ve left.

Advisory: Call the theatre ahead of time for questions about accessibility. Adult content.