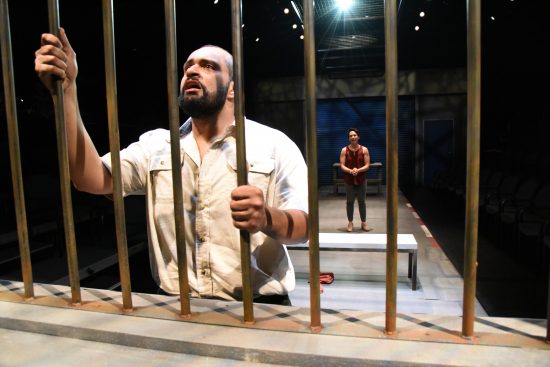 (L to R) Ahmad Kamal as Samer and Alyssa Wilmoth Keegan as Talia in The Return at
Mosaic Theater Company of DC, June 7-July 2, 2017. Photo by Stan Barouh.

On June 12, 2017, the Mosaic Theater Company of DC, as a part of their 2017 Voices From a Changing Middle East Festival, presented its opening performance of “The Return.” Co-written by Palestinian-American playwright and actor Hanna Eady and Seattle-based playwright Edward Mast, “The Return” chronicles the mysterious interaction between two individuals, Him and Her, and their tumultuous past that has led to a very thought-provoking series of events.

Him (Ahmad Kamal) is a hard-working mechanic whose singular, most unforgivable mistake throughout the duration of his life was being Palestinian Arab in Israel. Her (Alyssa Wilmoth Keegan) is a Jewish Israeli woman who, in her naivety, did not realize the true ramifications of a choice she made in her past concerning Him. Set in an auto repair shop in Herzliya, Israel, “The Return” explores the intricacies of the Israeli-Palestinian conflict and how the lives of everyday people are affected.

I urge everyone to take the time to see “The Return”…

As a woman of color, I must admit that I wasn’t necessarily excited to view a production in which a woman of privilege (regardless of her ancestral makeup) attempts to atone for her wrongdoings, but “The Return” is so much more than that. There was a particularly gripping scene in which Him and Her (later revealed to be Samer and Talia), upon finding common ground, were able to speak to one another about what it’s like to be… each other. While speaking to Talia, Samer beautifully states: “You wouldn’t understand what it’s like to be one of us and not one of you.” That statement, in and of itself, represents the crux of “The Return’s” message in its entirety.

Samer, being born Palestinian Arab (and having served a jail sentence in addition to experiencing torture at the hands of Israeli officials due to a premeditated, although apparently misguided, betrayal by Talia) has been forced to accept the fact that he’s nothing but a savage. Talia, in her unending privilege as an Israeli Jewish woman, wants nothing more than to help (and apologize to) Samer. But her actions continuously show that she doesn’t, yet, fully grasp the gravity of Samer’s situation. I realize just how torturous Samer’s stint in prison must have been when he expresses to Talia that all of the terrible things he’s experienced at the hands of Israeli officials and civilians alike were a direct consequence of his actions and his actions alone. Interestingly enough, it’s Talia’s unwavering need for atonement that causes Samer to realize that he, too, in all of his Palestinian Arab glory, is a human being and should be treated as such – no matter the consequences.

Alyssa Wilmoth Keegan’s portrayal of Talia was wonderful. Keegan’s ability to capture Talia’s sympathy while still displaying her lack (initially at least) of empathy was spot on. Additionally, Ahmad Kamal’s portrayal of a [literally] tortured soul was incredible; the intensity he exhumed throughout the duration of the production was exhilarating to witness. Overall, Ahmad Kamal and Alyssa Wilmoth Keegan do a wonderful job of bringing the multifaceted, yet incredibly flawed characters to life.

“The Return” does a lovely job of exploring how prejudiced attitudes can, literally, alter a person’s psyche. The Mosaic Theater asks: “is specificity of geography a necessary asset or hindrance in making this universal love and betrayal story relevant to us as Americans?” The truth? The similarities between the treatment Samer received at the hands of Israelis and the treatment people of color in America receive at the hands of white Americans are uncanny; geographical location has no bearing whatsoever on the relevance of “The Return’s” message in America.

I urge everyone to take the time to see “The Return” as actors Ahmad Kamal and Alyssa Wilmoth Keegan do a wonderful job of bringing the multifaceted, yet incredibly flawed characters to life. Additionally, Sarah O’Halloran (sound designer) and Colin Bills (set and lighting designer) do an amazing job of transporting audience members from NE Washington, DC to Herzliya, Israel; it’s amazing what one can do with a minimal set and the effective use of street/city sounds and multi-colored lights.

“The Return” runs through July 2, 2017, at the Atlas Performing Arts Center. For tickets and more information, click here.