Theatre Review: ‘The School for Lies’ at Shakespeare Theatre Company 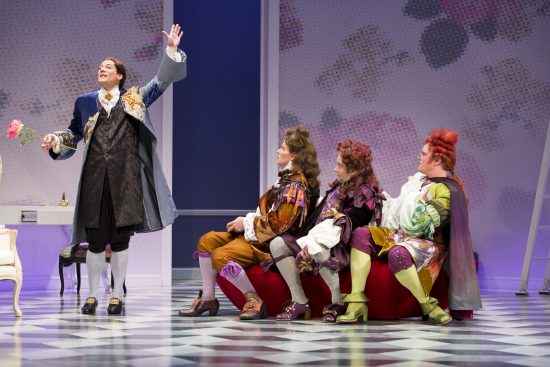 Oh, for the days when a snappy prologue got you in the mood for a night of great theatre.  Time was when someone would come out before curtain with a little witty patter, a bit of poetry to warm up the crowd.  Nobody does it anymore – so thank goodness for David Ives, whose ear for one-liners is as sharp as you’ll ever witness.

For my money, Cody Nickell’s opening monologue alone is worth the price of admission to Michael Kahn’s revival of “School for Lies,” Ives’ free adaptation of Molière’s classic French farce, “The Misanthrope.”  When not targeting our cellphones in perfect iambic pentameter, Nickell (soon to play Philinte, and hence decked out in foppish 17th century garb) gives Ives’ takedown of the Washington political scene, which is as brilliant as it is brief.  Harking back to the days of the corrupt court of King Louis XIV, he grins:

Can you believe, back then, what dunces ranged?

What fools filled every level of society?

What scoundrels, loons and clowns of wild variety

Thank God, we’ve none of that!

The best news is that from this high point, it’s nothing but onward and upward.  “School for Lies” takes serious liberties with Molière’s original comedy of manners—Ives clearly adores Shakespeare, and makes a point of inserting plot bits from “Much Ado About Nothing” and “Comedy of Errors,” when not tossing in the occasional pentameter quote from the Bard.  But this is farce, after all, with enough room for everyone to share the comic spotlight.

For my money, Cody Nickell’s opening monologue alone is worth the price of admission…The results are as improbable as they are entertaining.

Leading the pack of fools is Gregory Wooddell as Frank, the dour, Puritanical killjoy who despises the manners and fake politesse of high society.  As dashing as he is cutting, Wooddell’s command of Ives’ (and Molière’s) invective is wicked fun; it helps that he is just as clueless as the men he dismisses as so many stooges.  Philinte, his friend and defender (Nickell, in fine form), tries to prevent the inevitable social train-wreck and libel suits that might result from Frank being, well, frank; this he fails to do, but not before he hatches a plot to make a match between Frank and Celimene.  This subterfuge, redolent of Benedick and Beatrice, ends up succeeding in ways that even Philinte can’t predict.  But Celimene has competition in the unmistakably righteous form of Arsinoé, a righteous prig played to the delirious hilt by Veanne Cox.

The action in this one-act takes place in the trendy, goofily modern drawing room of Celimene (the brilliant Victoria Frings), decked out by Scenic Designer Alexander Dodge with everything from 3-story high doorways to a red-lip love seat and a gold hand-seat nearby.  Celimene, bereft of her husband, entertains a succession of bizarre suitors—none of whom measure up in Frank’s eyes, and each of whom is decked out by Costume Designer Murell Horton in Musketeers-on-Acid fashions, with deliciously comical wigs that one can’t help thinking might make an improvement on our current President’s hairpiece.

There are comic turns too numerous to mention here – if my editors let me go on about the funny bits I’d write a book—but rest assured that Kahn gets excellent work from the entire ensemble, with highlights including Michael Glenn’s double turn as the servants Dubois and Basque, Dorea Schmidt’s hilariously frisky Eliante, and Liam Craig’s cluelessly rich Acaste.  (Sorry, guys, the rest of you were awesome too).

“School for Lies” has more than its share of Shakespearian plot twists, so if you’re a fan of both Moliere and the Bard of Avon you’re in for some heady fun as you see how Ives contrives to mash the two together.  The results are as improbable as they are entertaining.

Face it, you need a good laugh.  This is about as good a one as you’ll find anywhere near DC, people.

Running Time:  1 hour and 40 minutes with no intermission.