Theatre Review: ‘Vanya and Sonia and Masha and Spike’ at The Colonial Players of Annapolis 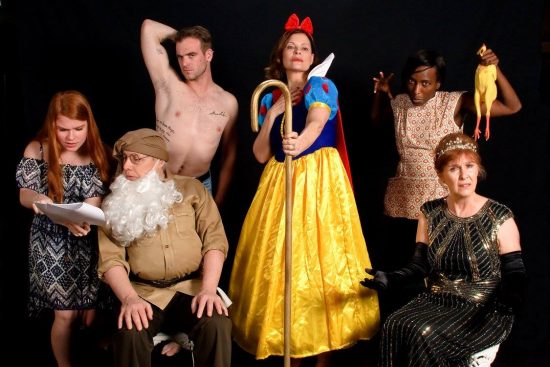 Hilarity and chaos ensue in “Vanya and Sonia and Masha and Spike,” the Chekhov-inspired play by Christopher Durang that follows the colorful and complex relationship of three adult siblings. Directed by Steven Tobin, the animated production by The Colonial Players of Annapolis entertains with witty banter, big egos, and lots of back and forth between the family members, a spell-loving housekeeper and two young out-of-towners, one of whom happens to be a buff boytoy who livens up the farmhouse in the otherwise sleepy Bucks County, Pennsylvania.

“Vanya and Sonia and Masha and Spike” is an absolute delight.

Collectively and individually, the cast members are a pleasure to watch from beginning to end. The opening sees Vanya played by Jim Reiter and Sonia played by Darice Clewell go through the motions of the morning routine–you know, small talk, bird watching, mixed in with some coffee cup smashing and a tinge of regret. Both actors are so funny and effective in projecting pent up angst, one passively and the other not so much. Then, in comes the voice of reason, aka, Cassandra, the over-the-top, prophetic housekeeper from the Caribbean played by the charming Ashley Spooner, whose antics and zany zingers instantly light up the room.

Soon the humdrum is replaced with more havoc when globe-trotting, glamorous movie star sister Masha, played by the magnetic Rebecca Kyler Downs pops in. At her side is twenty-something boyfriend Spike, played by Patrick Finn, who easily brings in the laughs with all that flexing and fixating on himself.

As the gang gets ready for the big costume party nearby, everyone’s insecurities, gentle jabs, and all around nuttiness, make for stellar comedy. Kyler Downs commands the stage as Masha, a star who can’t quite cope when she’s not the center of attention, even when she’s dressed up as Snow White–the Walt Disney version. She is especially amusing to watch when a young, pretty Nina, played by Hallie Parrott, shows up, stealing Masha’s thunder.

Reiter and Clewell are endearing as Vanya and Sonia, and make it easy for the audience to root for them, as both come into their own in later scenes.

Aesthetically, “Vanya and Sonia and Masha and Spike” is inviting with shabby chic, cozy interiors, complemented with a nice view of the outdoors, thanks to the vision of Set and Floor Designer Edd Miller and Properties Designer/Set Decorator Constance Robinson. Costume Co-designers Kaelynn Bedworth and Carrie Brady also add to the fun with wardrobe choices ranging from everyday clothing like pajamas to Seven Dwarves costumes and elegant cocktail attire.

The Colonial Players of Annapolis definitely know how to put on a highly entertaining production, and “Vanya and Sonia and Masha and Spike” is an absolute delight.

Running Time: Approximately two hours and 35 minutes with one intermission.