1. Alice in Wonderland by The Collaborative Theatre Company at Fells Point Corner Theatre.

Synopsis: Alice’s antic adventures are all here – but with an arresting difference. Lewis Carroll’s masterwork is daringly reimagined into a raw and profound journey through the human condition. Shaped palpably by some of the greatest minds of the twentieth century (Freud, Jung, Kafka and Dali) comes a mad take on an epic tale. 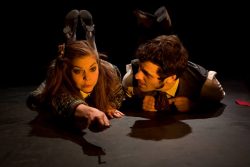 2. Hedwig and the Angry Inch at The Kennedy Center’s Eisenhower Theater.

Synopsis: Brilliantly innovative, heartbreaking, and wickedly funny, Hedwig and the Angry Inch is the landmark American musical by John Cameron Mitchell and Stephen Trask that is “shamelessly enjoyable and furiously funny” (The New York Times). This genre-bending musical sensation, with a pulsing score and electrifying performances, tells the story of one of the most unique characters to ever hit the stage. It’s about finding your other half; it’s the story of the origin of love.

Euan Morton sparkles in “Hedwig and the Angry Inch,” now playing at the Kennedy Center. Photo by Joan Marcus.

3. Joseph and the Amazing Technicolor Dreamcoat at Toby’s Dinner Theatre.

“Whether it’s your first time seeing Joseph or you know the show by heart, you will fall in love with the new musical arrangements and extended dance numbers that ramp this show up to a new level of creativity and entertainment.” – Liz Ruth-Brinegar.

Synopsis: Bring the entire family to this Old Testament story of Joseph, his brothers and his amazing coat as it comes to vibrant life through uplifting song and dance. Country, Calypso, Pop, Rock and Roll – this non-stop, eclectic score by Andrew Lloyd Webber, is the reason ‘Joseph’ is one of the world’s most popular musicals. Travel down the Nile and see the wonders of ancient Egypt as Joseph discovers that “Any Dream Will Do.” No less than five show-stopping female leads with roots at Toby’s Dinner Theatre return to become part of its present. In a first-ever casting coup for the landmark Columbia, Maryland theater, the five veteran performers have agreed to return to the stage as the Narrator in this summer’s revival of “Joseph and the Amazing Technicolor Dreamcoat.” 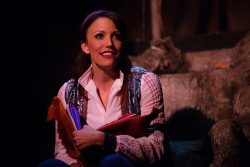 4. Still Life with Rocket by Theater Alliance at Anacostia Playhouse.

“‘Still Life with Rocket’ is easily one of the most innovative pieces I have seen in the D.C. area recently.” – Kaley Beins.

Synopsis: With Etta’s death rapidly approaching, her grown children return home, reviving the wild, reckless, and brutal games of their youth. But when long-buried secrets are resurrected, the games become battles that threaten to tear the family apart. A raucous new performance event that blends theater, dance, and art installation, Still Life with Rocket delves into the fragmenting mind of a dying matriarch and the strength of the family she created. 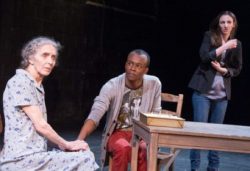 5. Red White & Tuna at The Little Theatre of Alexandria.

Synopsis: Red, White, and Tuna – Just in time for July 4th, LTA returns to the third smallest town in Texas to celebrate Red, White, and Tuna! Welcome to Tuna, where the Lion’s Club is too liberal, Patsy Cline never dies, and the residents never stop listening to OKKK, the local radio station. In this hilarious third installment of LTA’s 2009 production of Greater Tuna, two actors again create the memorable population of Tuna, including a few hippies who have returned to their roots for their high school reunion. Is Tuna ready for them? Join the wild ride of quick changes and comedic characterizations. 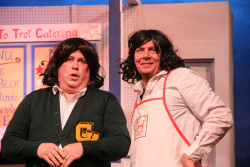 David Wright as Inita Goodwin and Stephen McDonnell as Helen Bedd in ‘Red White & Tuna’ at The Little Theatre of Alexandria in Alexandria, Virginia. Photo by Matt Liptak.