‘A Quick 5’ with Clinton Brandhagen 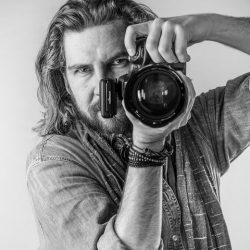 His company, ClintonBPhotography is in the DC/Baltimore area every six weeks or so. If you’d like to get the email announcements, feel free to join the subscriber list.  He will be doing headshots in Baltimore this weekend, July 21-24th. You can find all of the details here.

I’ve been a full-time photographer for over a decade now. I’m also an actor and have been in the business since I was nine. I understand the nerves, the insecurities and the self-consciousness that accompanies the dreaded headshot session. I mean, it’s the most artificial we ever are as actors, right? In the headshot session, you have no dialogue, no set plot or character, no costume other than your own clothes, and there’s a audience of one – the photographer – suggesting movement and expressions. It’s easy to let your insecurities take over and let your mind wander down the path of ‘I’ve got to be “interesting”’ and ‘I wonder if I have a double chin in that shot? And is this the best top I could’ve chosen? And am I “smizing” enough? And what’s my hair doing? Where are my arms?’ and on and on it goes.

I pay close attention to what’s trending in the industry. Whether you’re a photographer or an actor, we all know this: successful headshots make it to the top of the pile, the thumbnail that pops off the screen gets the click, they’ve gotta catch the eye and be more than a pretty picture. They’re remarkable, unique, artful…so many things! My favorite shots do all of that and then are perfectly imperfect. Real. A good headshot does all of that and a great headshot captures an actor’s energy, essence, personality, aura, whatever you wanna call it. How you get there depends on your photographer. 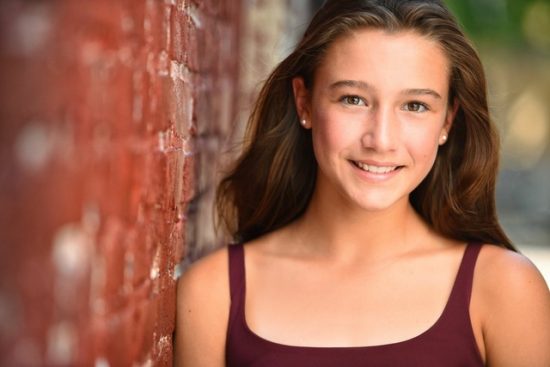 Two headshot truths that I believe: 1. You shouldn’t see the photographer before you see the actor. The “style” or treatment of the photo isn’t helpful if that’s the first thing you notice when you look at headshot. Especially if it looks like everyone else’s shot. You’ve gotta see the actor first. 2. You don’t have to feel all the feels to pull off an engaging, jump-off-the-page headshot. You just have to look like you are. Spoiler alert: Just like that play you’ve been rehearsing, headshots are staged. From the backgrounds to the lighting to the clothing and the expression on your face. We’ve got to find the right combination of elements that tells your unique story in fraction of a second.My job is to present my clients accurately and authentically so they can #getnoticed and #beremembered (my two favorite hashtags) and usually that means getting to know them a little bit. I like it when actors tell me everything and anything. Tell me the roles you’ve played and want to play. Tell me about your cats. Tell me about your career and where you want to use your headshots. Tell me what you’re into. Show me your website, your Instagram, your Twitter, and let’s talk about all the places these new photos can live.

Most importantly, tell me about the stuff that bugs you when you see pictures of yourself. We’re our own worst critics, but if we can be super honest with each other – if you don’t like your smile (me), tell me that or if you get self conscious about your cheeks (me), or if you wish you were a few pounds lighter (me), or whatever it is, please tell me – then I can keep an eye out for those things and you don’t have to worry about it. I can shape the light and play with different lenses and framing, body positioning and angles in such a way that together we can bring your best face forward. Don’t overthink it. Over the years I’ve come up with a bunch of games and distractions that keep my actors out of their heads and focused on one thing: playing with me and the camera. Focus on the process not the final product. I’ll be your mirror and your coach. There’s no rush. We shoot and discuss and look at what we’re getting and laugh at the half blinkers (aka “the dreadshots”) and then we shoot some more until we cover our four looks and feel great about what we’ve made together.

Tell us about your most memorable photo session ever?Here’s a weird thing. I remember every single shoot. I remember where I was standing for every photo I’ve ever taken. I don’t know why, but it just sticks with me. One time, I had a last-second booking where they needed their shots the next day and we had to get them done in a super small window of time and they REALLY wanted natural light. Cool. No problem. I can work fast. So we’re just about to meet and the sky goes from sunny and blue to looking like “The Great Nothing” from “The Never Ending Story” was about to swallow up the city. It was a nasty storm. The wind started blowing, the emergency broadcast system started up on the radio, we saw blue sky one direction, and small funnel clouds forming to the west. We had to make it work. And thankfully the clients were up for a little adventure. So we jumped in the car – branches were literally flying off the trees – I thought, well, we’ll probably be safe in a big concrete structure like a parking garage. We can make it work AND be safe from flying shrapnel. The tornado watch was real. We drove up to the top two floors of the garage and started to shoot. The wind blew though, then the hail, then the thunder and rain and then finally the sun broke through just as we were wrapping (of course). We made it work and they were able to make it downtown for rehearsal in time. I’ve given clients – men and women – the shirt off my back because they forgot clothes or we needed just one more look. There’s always something unexpected.

Anyone can take good photographs these days with their smartphones. Why is it still important to have a professional photographer when it comes to headshots?

The simplest reason not to use a smartphone for a headshot is lens distortion. Camera phones have wide-angle lenses. Have you ever taken a series of photos something with your phone and then looked at them in succession and the straight lines don’t seem so straight from shot to shot? The same happens with your face. It’ll bend the image like a funhouse mirror. The technology is really awesome and I’m absolutely in love with the camera on my phone, but enlarging the images will likely be a bit grainy and have color noise in your shot when you go to print and Lord help you if you want to crop the image with your phone and then enlarge it. It’s just a bad idea. I dig the new portrait mode on the iPhone- it artificially gives you that nice Bokeh (blurry background) but it’s not going to give you the depth, detail and clarity of a professional camera. 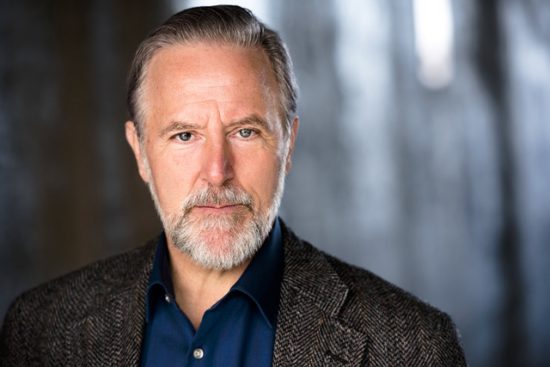 If you take yourself seriously as an actor, invest in your career and hire a pro. Nothing beats working with someone who has excellent gear and knows how to use it from shooting to retouching. To pull off a great shot, I know to keep my ISO within a certain range, which lens will be most flattering for the client’s face and body type, and how much or little I want to blur the background. I adjust for white balance and skin tone, figure out where I want to put my radio controlled speedlights if I want to fill in the shadows, color a wall or highlight a cheek. I also shoot RAW and I shoot for options – meaning one of my photos can be cropped in multiple ways for different social media platforms or prints and not lose any clarity and resolution.

Besides humans, I also notice that you like to photograph animals, especially your cat.  What makes for a good animal photo?

Just like a headshot, my favorite shots are the ones that capture personality – or what I want to think is their personality. I think it’s called anthropomorphism when you recognize human traits or emotions in non-human things. Buster, my tuxedo cat, has the most expressive eyes in the world. But he’s just a cat. He’s thinking about sleeping, eating or hunting. Mostly sleeping. But if I get the light right and can trick him into looking at the lens it seems as if he’s got a lot more going on in there. 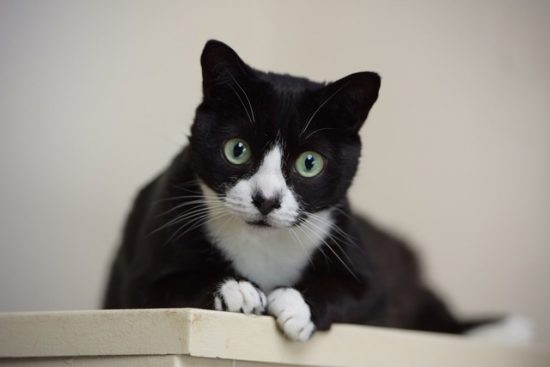 What other types of photos do you like to take?

The production photos have become a significant part of my photography. I love how fast I have to think and move and make adjustments. Whether it’s a play or a musical or a rock and roll show, it’s thrilling to be on the hunt for the money shot. I’m often a sweaty mess by the end and I’ve been known to bang out 3000 shots in a couple of hours because I prefer to shoot in performance as opposed to staging shots in a rehearsal. I do lots of running up and down aisles, switching lenses and camera bodies, swapping memory cards. It’s like shooting sports in that you really learn to anticipate the action, be fast with your focus and do it all in the dark. And timing is everything – especially with musicals. A breath too late and the shot is gone – the mouth is in a wonky position, they’re blinking, the guitarist has already landed from that wicked leap off the speaker, or they’re on to a new piece of choreography. 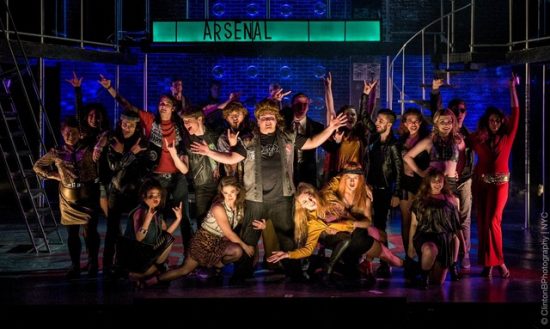 I’ll shoot anything, really, and love new challenges. Cityscapes, landscapes, the NYC Pride parade (one of my favorite events to shoot). I’m doing a bit more fashion and modeling shoots which is super cool. Weddings, concerts. I really like it all so long as I can capture a moment in time, make it look awesome, and then share it. 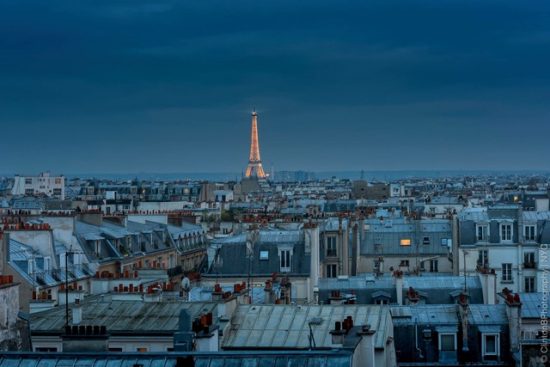