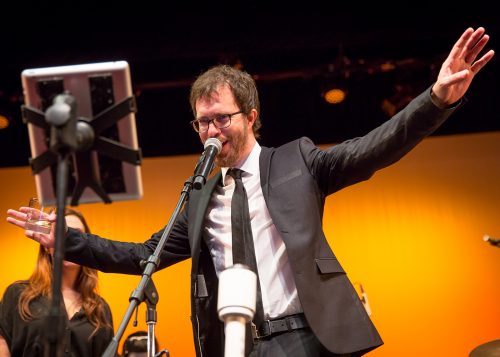 Ben Folds performs karaoke for the crowds after the show. Photo by Scott Suchman.

What makes music “classical?” Is it a style, a time-period, a particular set of instruments? Newly appointed Artistic Advisor to the NSO, Ben Folds, explored this question this past Friday night as a part of the DECLASSIFIED series. DECLASSIFIED is a series of NSO concerts that experiment with different genres, blending eclectic artists with the impressive musical might of the NSO. In this concert, Ben Folds curated a performance where multiple talented artists came together to perform an incredible show, where widely diverse styles came together and blended sublimely.

For his first entry into this series, Folds chose to feature two very talented and very different artists; Blake Mills and Danay Suarez. He also brought in skilled, and debonair, conductor Jacomo Bairos to guide this complex collaboration. He was a perfect choice, as he is the co-founder of the Nu Deco Ensemble, which also celebrates the interaction of “new music with classical, popular and electronic traditions.” Bairos is also a frequent collaborator with Folds, so they have both literally and figuratively have made sweet music together before.

Not only was the concert impeccably curated by Folds, the entire night was designed to connect people and immerse them in different musical genres.

The concert was kicked off by a charming Ben Folds, introducing the show with a nervous excitement. You could immediately tell that he had put a great deal of thought, work and heart into this concert and was immensely proud of it. He introduced Bairos, who led the NSO in their opening number, “Strings on Fire!” by Henry Mancini. As the title insinuates, the string section shone in this frenetic piece, stunning with their lightning fast bow work. The piece also featured a fixture of Mancini’s work – a dominant brass section. NSO delivered a nuanced performance of a dynamic piece of music from a giant of composition. It was also an interesting way to start the concert, with a more traditional piece of orchestral music, before moving into the more avant-garde. The next piece was an interesting piece called “Lollapalooza,” which was inspired by the rhythm of the unique word. “Lollapalooza,” which means “an extraordinary or unusual thing, person, or event” was composed by minimalist John Adams (not to be confused with the American president).

Next, Blake Mills was welcomed to the stage. Mills is best known as a talented guitar player and was described by Folds in his concert notes as “destined to be one of the significant music producers of our time.” He performed three songs with the NSO, all connected by a mellifluous tone and hushed beauty. The first tune ” Half Asleep,” was beautifully understated, and its beauty was intensified with the addition of the NSO orchestration, adding to the strings included on the album track. “Falling Out of Love” was up next, which was a treat since it doesn’t appear on either of his two solo albums, “Break Mirrors” (2010) and “Heigh Ho” (2014). He closed his section with the quasi-country “It’ll All Work Out.” This was not the last we would see of Mills, though. He would assist with several other pieces throughout the performance.

The NSO then played another more well-known orchestral piece, which has become very popular since it was written in 1928, “Malaguena.” This was actually a piece that I remember playing in junior high marching band, and it has been established as a popular choice for that genre. While considered mostly traditional classical music today, its Latin influence was most likely considered unique and edgy when first produced. It’s crisp tempo and varied volumes reminded the audience why it has emerged as a classic of its time and was played expertly by the NSO.

“Malaguena” was an excellent segue into the next section of the concert, which featured Cuban vocalist Danay Suarez. A sultry combination of jazz and hip-hop, Suarez’s delivering and phrasing walks a fine line between singing and rap. She too performed three pieces, primarily in Spanish. To help the audience members who didn’t speak Spanish, the translations were included in the program so we could absorb the full effects of Suarez’s music. She also stood out with her bright and humorous banter with the audience between the songs. While “Yo Aprendi” (I Learned) and “Lagrimas de Soledad” (I learned) were both strong pieces, my favorite was ” Wake Up,” which Suarez delivered at lightning speed. Her performance was a fantastic example of what Folds was undoubtedly trying to accomplish with this performance and indeed with this series in general; introducing the audience to new and talented artists they may not have heard of before. Suarez would also pop up again later in the performance to support.

The next piece was introduced by Folds as an integral part of his development as a musician, and indeed had a large impact on many members of the audience; the Suite from the landmark film “To Kill A Mockingbird.” In the expert hands of the NSO and Folds on the piano, this beautiful melody came to life and did the powerful message of its source material proud. Folds then performed three of his pop tunes, with orchestrations supported by the NSO. I was excited to hear another orchestral performance of “Erase Me,” which Fold also performed last year at the Concert Hall when he performed his collaborative album “So There” with contemporary classical chamber group YMusic. Not only was it as great as I remembered, it was even more powerful with the might of the entire NSO behind it. He also performed the entertaining “Bastard” and one that I hadn’t heard before, “Practical Amanda.” It truly is astounding that these pop hits blend so well with these complex orchestrations. The show concluded with a remix of Movement III from Folds’ “Concerto for Piano and Orchestra and was joined again by Mills and Suarez for the finale.

Not only was the concert impeccably curated by Folds, the entire night was designed to connect people and immerse them in different musical genres. The evening was precipitated by a free beer tasting, complete with a goofy photo booth. This got things off to a fun and loose start, on a beautiful warm and sunny evening. As the audience exited the Concert Hall, they saw that the Millennium Stage was now occupied by the HariKaraoke Band- karaoke with a live band! Most of the audience stuck around to see people perform, including Folds himself, and even this reviewer (I chose “Alone” by Heart). It was an immensely entertaining evening that was successful in its mission to bring people together and share different music. I’m ecstatic that this is a series of performances and cannot wait for the next one!

While this concert was a one night only event, there are more DECLASSIFIED concerts coming up. Click here for more information.