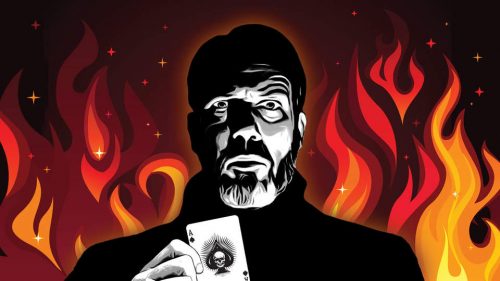 Hail Orson, lord of the theatre, returned now to enchant and inspire!  Actor/director Lars Klores plays the legendary artist, back years after his demise, in his one-man magic show, “Orson the Magnificent.” A night of captivating bewilderment awaits as Orson toys with our perception of reality through his magic while tugging at our hearts with his musings on the many long-gone magicians he so admired.

From the moment Klores emerges, clad in Orson’s iconic black hat and coat from his subversive meta-documentary “F for Fake,” the audience is roped into his act.  We are instructed to expect a night of trickery, and, with that disclosure, promised an entirely honest show.  Indeed, Klores’s portrayal of Orson is an honest one, done in earnest while effortlessly capturing his composure, charisma, and dramatic flair, along with that sophisticated yet welcoming tone.  The direction is mesmerizing, enhanced by Peter Caress’s precise light design to altogether make averting your eyes impossible.  Orson lets us take comfort in our awestruck state, delivering his finely crafted tricks with the attitude of a friend playing a familiar game, making for an engaging, captivating delight.

The magic is nicely plotted, following the beat of Orson’s anecdotes to showcase a wide variety of tricks derived from 20th-century magical movements.  These range from crafty card tricks to baffling conjurings to a grand illusion beyond life and death that I dare not spoil.  Of course, death looms large as Orson acknowledges he is indeed dead, but the tricks’ origin throughout history grant a new meaning to Orson, giving him a transcendent identity as a figure representative of magicians’ influence.  This existential uncanniness enhances Klores’s divine control over an audience, as the observers and volunteers alike at my showing remained entranced with his apparent ability to read their minds.

As Orson talks more about the magicians who inspired his craft, he conveys a somber recognition that the actual tricks will likely be more remembered than those who pioneered the art.  Yet Orson speaks to the joy artists like Houdini or Malini feel through their work.  How they relish the opportunity to, through all the copious rehearsal time invested to achieve perfection, sell pure wonder, if only for a few moments.  Their influence, like their work, is almost invisible, remembered more for its general effect, but resonates in exciting our curiosity with the unknown and unexplained, in tapping into our frustration at not having all the answers in an unpredictable world beyond our control.  It asked questions, those “why?”s, that make up the experience of life.

It’s a happy event, having a great illusionist here if only for an hour, to live on the legacy he left behind.  Fueled by his great respect for Mr. Welles, Klores’s production creates a truly magnificent illusion of life and a continuation of Orson’s revolutionary impact on the world of the arts.

“Orson the Magnificent” runs through July 22 at the Trinidad Theatre at the Logan Fringe Arts Space.  For more information, click here.