Fringe Review: ‘Quantum Suicide: A Professional Talk with Sophia Miller’ by Reliant Theatre in association with Nu Sass Productions at Caos on F 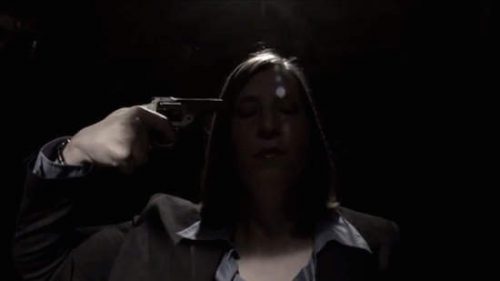 Tennessee Williams once said, “There comes a time when you look into the mirror and you realize that what you see is all that you will ever be. And then you accept it. Or you kill yourself. Or you stop looking in mirrors.” This analogy hinges on the idea that the “you” is singular. The Reliant Theatre in conjunction with Nu Sass Productions presents “Quantum Suicide: A Professional Talk by Sophie Miller, a play that takes the mirror that you look at yourself against another mirror, so there are an infinite number of “yous.”

I’m not exaggerating when I say this is probably the best play I’ve seen at the Capital Fringe in the three years that I’ve been coming to see the festival shows.

Written and Directed by Matthew Marcus, this play expounds on the Many Worlds theory of Quantum Physics, teasing that out until the Doctor explains it is intellectually engaging with a very refined story. In the form of a lecture, it feels more like a conversation in a café.

Alexia Poe’s Dr. Miller is an incredibly brilliant mind trapped in the confines of this single universe. Poe draws the audience in with her gorgeous and calming speaking voice while discussing topics that are unsettling and captivating. She really delves into the inner life of the character, creating a portrait of a woman both powerless and empowered by this idea of Quantum divinity.

Despite its heavy subject matter, the show is surprisingly light-hearted at times, Dr. Miller often calls for volunteers in her explanation of theories of quantum mechanics. There are coin tosses that explain probability and an illustration of Schrodinger’s cat. In between the bouts of audience participation, Sophie herself uses a power point presentation to illustrate her point, which sometimes adds comical moments in the show, almost becoming a character in its own right.

In the wake of countless Hollywood mishandlings of suicide, it’s refreshing to see a play that hands the subject with such respect and dignity. I’m not exaggerating when I say this is probably the best play I’ve seen at the Capital Fringe in the three years that I’ve been coming to see the festival shows.

Advisory: This play contains the use of a weapon and adult themes.