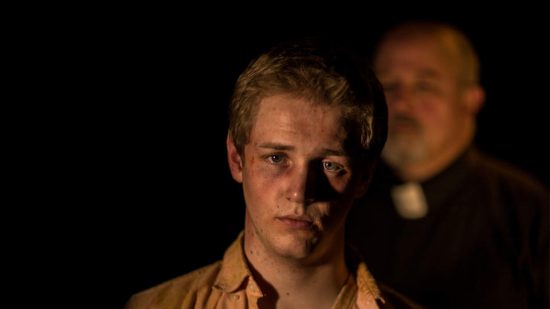 What starts as a surrealist religious horror show descends into a riveting pre-mortem dialogue in Michael E. Hammond’s “Repentance.”  Director Carl Randolph makes excellent use of the show’s location and minimalist design to create a sensory, wrenching drama that lets its two leads play perfectly-alike opposites, debating Heaven and Hell as purgatory dwindles away.

A priest (William Aitken) is tasked with forcing a masked, supposedly possessed prisoner (Griffin DeLisle) to repent.  The exact nature of the latter’s sins are not initially specified, but he is surely trapped.  Should he refuse, he will be slaughtered.  Should he repent, he dies a liar to the Church.  Removing the prisoner’s mask, the priest finds himself staring at someone reminiscent of a boy from long ago.  Following this unmasking, the possession angle is all but abandoned, with the mystery of the boy and the reasons for the priest’s interest in this particular prisoner becoming the focus.  The shift, while sudden, paves a new, unexpected but satisfying path to the bitter end made incredibly engaging by the leads and atmosphere.

Aitken and DeLisle share a terrifically antagonistic chemistry.  Aitken as the priest is cold, off-putting, and casually profane.  Initially appearing immune to criticism, he reveals a more emotional side when proclaiming the Church’s teachings on the afterlife through parables and diatribes.  His beliefs are based in past tradition, but his priority is the prisoner’s future.  The prisoner’s responses, however, bring his arguments into a different light.  DeLisle as the prisoner is a comparatively more likable character: a cynical smart aleck who also reveals his more emotional side when provoked, but looks openly toward his inevitable future, espousing the depraved beauty of Hell awaiting him.  He meanwhile concerns himself with the priest’s past, specifically his preoccupation with personally justifying the punishment that will befall the prisoner.  One forces a smile under restraint while the other, free of physical bindings and masks, boasts while desperately wiggling out of his own misdeeds.  Both lie out of fear, and both are trapped in a physical and moral prison with no clear escape.

In a play structured around disputes, the question of who dominates each scene recurs frequently.  In one instance, the prisoner, describing Hell, convinces the priest to indulge in an extended description on the eternal torments destined for all he believes deserve Satan’s wrath.  Aitken’s delivery is powerful and seductive, and this monologue, filled with provocative analysis of the Catholic Church’s interest in the power of suffering, is truncated by a shocking, indicative remark by the prisoner that ends and recontextualizes the entire scene.  The devastation is instantaneous, powerful, and earned.  As men turn from forgiveness to malice, the performances of these developed characters sell this as a pitch-black fever dream of power struggles.  An audience will avidly follow the interplay, absorbed in the battle for dominance and satisfied with its changing resolution.

The show’s production design embraces conflict through shadow-play.  Randolph’s terrific direction is based in physicality.  His actors are positioned before a white screen, front-lit to project exaggerated silhouettes emphasizing proximity and character-presumed influence.  The choice, owed also to lighting designer Dean Leong, serves as a clever illusory storytelling device, displaying character viewpoints while trusting viewers to perceive the objective, understated realities of the situations, perceptions, and affectations.  The stylish immersion is broken only occasionally by a red light centered on the prisoner.  Prior to the unmasking, when he can only produce muffled, animal-like screams, the effect is ominous.  Afterward, when his dialogue is mostly built on disillusionment, it hardly warrants such extremity.  The light’s use is thereafter thankfully sparing.  Otherwise, “Repentance’s” personal, confined aesthetic is consistent and further enhanced by the sound design; iron gates far away squeak, water drips, and even chairs scooting in the upstairs cafe, while unintentional, delivering that sense of isolation and the unknown that convincingly transforms the set into an eerie, judgmental world between worlds.

‘Repentance’s” wrenching exploration of punishment as both a coping mechanism beyond moral reasoning and as a tool for projection of hatred of universal wrongs raises tough questions regarding the limits of forgiveness.  It begins as more experimental fare than it is, making it feel slightly unsure of itself, but through its strong and deceptively restrained execution, the full form is realized and reflective.  It is a stop by a confessional that asks us to empathize with the damned, to re-analyze how we dole out punishment and to consider our motivations to condemn. Delivering confession, we ponder whether the unabashed cruelty involved in punishment – real or desired – is itself wrathful, selfish, sinful… a universal wrong we easily forgive, and whether that is an action that too requires repentance.