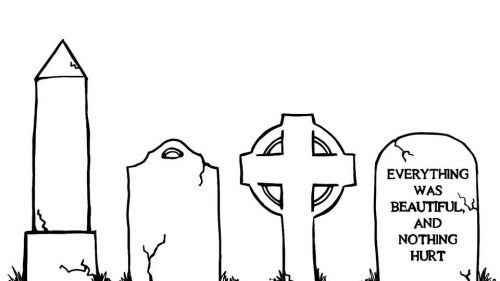 Philadelphia’s The Hodgepodge Group comes to DC for a two-run production of “Slaughterhouse-Five.”  Born as a project at Wesleyan University by director and Hodgepodge co-founder Miranda Haymon, this ambitious adaptation of Kurt Vonnegut’s acclaimed dark satire delivers an immersive, inventive trip into a scattered, shattered mind.

Billy Pilgrim is an optometrist denied an objective vision.  A WWII veteran, he is haunted by the death that he escaped.  He copes through a kind of optimistic fatalism supposedly obtained during an alien abduction after the war.  To Billy, everything is predetermined, but when death occurs, a person only “appears to die,” existing within a timeline only he can access.  Throughout this play’s nonlinear narrative, Billy wanders the maze of time, seeking to understand why he is kept alive, accepting the fleeting nature of life and, in his own way, coming to terms with mortality.

Russell Goldman stars as Billy, and nicely captures the character’s confusion, naivety, and warped positivity.  Despite the audience’s initial alienation to Billy’s bizarre thought processes, Goldman’s portrayal makes the character wholly likable and empathetic enough that viewers will want to enter his headspace.

Goldman is the only character in the cast who plays one continuous role, with Rose Beth Johnson-Brown, Katherine Paterson, and Eppchez, primarily the narrators of Billy’s story, assuming a variety of friendly and antagonistic roles in the theatre of his mind.  Johnson-Brown and Paterson showcase great versatility, particularly in their physicality.  We accept them in one scene as real people, even members of Billy’s family, while their silence and bizarre movements in the next instantly grant them an unrecognizable, otherworldly aura.  Eppchez, however, is uneven, delivering lines inconsistently, sounding forced in scenes where they are meant to be playing commanding figures, and – while no fault of their own – their hairstyle, unaltered for the show, makes them look distractingly out of place during scenes set during the war.  For anything that may take the audience out of the experience, however, the production design remains a re-entry point.

“Slaughterhouse-Five” is innovative and immersive thanks in large part to its design, which completely sells the sense of being lost in time.  The show portrays a variety of scenarios in the past and future through resourceful use of limited props and set dressings, creatively conveying that Billy’s perceptions are corruptions derived from his mind in the present.  Matt Catron’s lighting, which employs inventive techniques like using flashlights in an otherwise dark blue room to indicate searchlights sweeping over a dreary war zone, enhances this atmosphere.  The sound design also merits attention, particularly the use of radio static as yet another clever metaphor for Billy’s existence.  Unfortunately, during my show, the sound levels needed some balancing.  At times, the narration was in fierce competition with Josh Davidoff and Angus MacDonald’s score, but this audio misstep never became oppressive.

“Slaughterhouse-Five” runs short, but resonates big.  While it could benefit from some minor fine-tuning, the production is overall a fantastically realized depiction of Billy Pilgrim’s death of communication and rebirth of purpose (not necessarily in that order).

“Slaughterhouse-Five” runs through July 23 at the Trinidad Theatre at the Logan Fringe Arts Space.  For more information, click here.