Fringe Review: ‘The Blind’ by the Wheel Theatre Company at the Eastman Studio Theatre – Gallaudet University 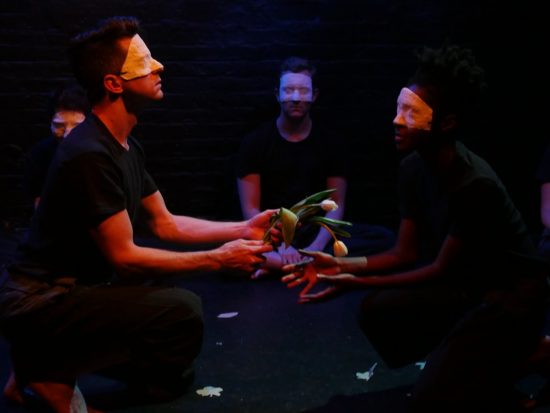 “The Blind,” written by Belgian Nobel Laureate Maurice Maeterlinck is a thought-provoking production that tells the story of eight individuals who, against all odds, have banded together during what may quite possibly be a life or death situation. Although the mysterious individuals have found themselves in quite unfortunate circumstances, their will to survive and reliance on one another demonstrate the not quite understood power of true hope.

“The Blind” is an intriguing tale of humanity, hope, will, and determination and is certainly relevant in our 21st-century society.

Adapted by Jack Read, the production begins with eight individuals who are seated in a location unknown to them. How long were they there? When was the last time they had something to eat? Who lead them there? And Why? Those are the questions that the audience members discover in real-time as the cast-members of the production slowly piece things together. We quickly realize that every single one of the “lost” individuals is blind and that they’re waiting on their guide to lead them home. Where is she? How long has she been gone? Is she going to bring food with her when she returns? In a seemingly hopeless situation, the lost individuals quickly realize that the only way to ensure their safety and return home is to rely on each other.

The actors who portrayed the lost, blind individuals wore simple face masks that, according to Read, represent presence and unity. Interestingly enough, the characters in and of themselves (as they lack individualized names, and only exist as characteristics i.e. “The Beauty”) represent the whole of humanity. Although the blind was written almost 130 years ago, Maeterlinck realized long ago that, although we may interact with people on a daily basis, one of the things we often overlook is the ability and necessity to deeply connect with other individuals. As the men and women attempt to decide on a course of action, one of the women notes that “for years we have known each other, but we have not beheld one another.” Additionally, one of the men states:

It’s quite intriguing that a story written so long ago could have such relevance to our lives in the 21st century.

It’s difficult to select “stand-out” performances as I assume in order to stay true to the ambiguity of the work, the actor’s roles were not specified in the program; they’re all listed simply as members of the greater ensemble. However, there’s a particular scene in which a dog wanders toward the lost individuals and leads them to a startling revelation. I won’t go into detail as to what the dog revealed to the individuals, but I’d like to note that the actress’ “portrayal” of the dog was very creative and smartly done.

The production itself was fairly minimal; the set consisted of a dimly lit stage covered in handmade leaves and Jackson Floyd provided original music. It would have been interesting if the stage had been a tad bit darker in order that audience members may have perceived the world as the lost individuals had. That being said, the minimal nature of the production, I believe, allowed its message to shine through as there were no distractions that could have prevented audience members from understanding Maeterlinck’s worldview.

“The Blind” is an intriguing tale of humanity, hope, will, and determination and is certainly relevant in our 21st-century society. One of the men, who just so happens to not only be blind but deaf also, in his blissful ignorance, asks at the very end of the production “is she not coming?” And it’s that very hopefulness that may allow humanity to press onward although, at times, our outlook may seem a bit bleak.

“The Blind” runs through July 22, 2017, at the Eastman Studio Theatre – Gallaudet University. For tickets and more information, click here.