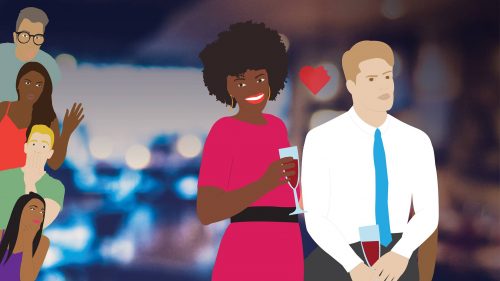 In INC Productions’ Capital Fringe debut, co-writers Sherrita Wilkins and Chinwe Nwosu and director Bryanda Minix take us out for a night on the town and into the world of DC dating in “The Regulars.”  After her older cousin Gina (Eva Lewis) “encourages” young black Nikki (Chayla Simpson) to break out of her shyness, she finds herself at a restaurant table with Alex (Clint Bagwell), a white guy from Arlington (who is, he can’t be clear enough, *definitely* not an administrative assistant).  The life coaching only gets worse from there when the sweet-talking strangers a table over make it their mission to bombard them with advice.  Is this really necessary?  Will she ever get to live in the moment?  And why is her date so sensitive about his job title?

As Nikki, Simpson is a likable protagonist who easily endears us to her effort to come out of her shell and her awkward interplay with her date.  Clint Bagwell plays Alex as entertainingly out of his element.  He is both frustrating and human, trying to display his knowledge of the constructs of culture and privilege but slipping so easily into perceived micro aggressions.

This perfectly unperfect pair’s scrambling to patch up this leaky dam of a date is frantic fun, and the dialogue takes a couple quirky twists and turns, but beyond the commentary, ‘The Regulars’ starts to feel rather familiar, because it is a pretty formulaic romantic comedy.  Girl meets boy, girl must be this, boy must be that, it may not be destined, but it will be a learning experience for the both of them.  Certainly cute, but without much nuance.  Luckily, speaking of watching, the real selling point is just over on the sidelines.

…directed with a snappy, playful energy…

A table down from the unlikely duo sit four friends ready for trivia night, only to find it canceled.  Looking for a buzz, they make a game out of monitoring Nikki and Alex’s date and later split up when it looks like the date’s gone sour to provide each party with notes on how to affect for affection.  The group, featuring a sharp-dressed young elitist (Inestin Petit-Homme) a buttoned-up, married know-it-all (Courtney McNeal) and their tacky gay friend (D’Arcee Neal), have some great exchanges directed with a snappy, playful energy, their diverse personalities playing terrifically off one another.  The lone exception is the entourage’s playboy member, a miscast Pete Pinocci whose delivery matches neither the self-assurance or the comedic timing of the rest.  Everything indicates the character is supposed to be played straight as a Casanova, but instead his lack of swagger and his body language that distances him from the group makes him come off as an uncomfortable wannabe.  Otherwise, this lovable motley crew is the reason to see this show; they steal it in a heartbeat.

“The Regulars” is a charming, feel-good comedy.  While the focus is on the characters, Wilkins and Nwosu use their characters’ identities and situation to touch on an array of divisive topics, from average marriage age to newer social terminologies, with enough tact and levity to put a knowing smirk on even the most cynical viewer’s face.  Just don’t go in expecting anything major or revelatory beyond a provocative joke or two.  It’s a pleasant, accessible hour of escape with a terrific supporting cast and a tried-and-true moral about learning to love the great things that make you “you” that in the end literally invites everyone to join in the fun.

“The Regulars” plays through July 21 at the Trinidad Theatre at the Logan Fringe Arts Space.  For more information, click here.