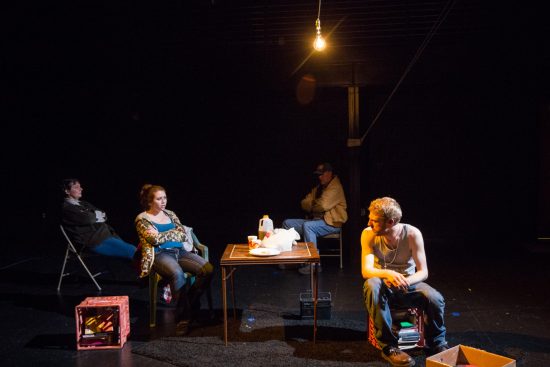 Irreversibility is at the core of James E. Custer’s original and ambitious “This Too Comes By Hard,” about a man whose refusal to accept the consequences of his toxic life limits his ability to perceive reality.  Thrust into his shameful situation, the audience is challenged to grapple with the provocative philosophical questions of whether he deserves or even desires forgiveness, but may feel deprived of the time and focus required to formulate complete answers.

In the eye of the storm, between a long-gone past and a dying future, stands M (Will Browning).  His life of bridges burnt, life choices abandoned, and rampant abuse has driven him away from his parents.  His fiancé and fellow drug addict, W (played achingly as a lost soul by Angela Tolomei) offers the closest thing to companionship left.  Browning delivers a heated performance as M, channeling his shame into passive-aggressiveness at his mental best and violent outbursts at his worst.  Browning breaks away from this in M’s dreams, where he and a hitchhiking preacher (a serious yet affable Jessie Houff) calmly coast along an endless road, with only echoes of hopes and fears outside.  These scenes nicely convey M’s desires for control and passivity, but also leave more to be desired in Browning’s “real world” performance.  He captures M’s frustration at his mental state and his drug-fueled rancor, but that fear that he may lose reality – the only apparent constant left – could be better embodied to make for a more vulnerable, more empathetic M.

The character tension is deeply engaging, especially between M and his parents in scenes characterized by escalating blame between begrudging affection.  Heidi Winters Vogel gives a convincingly distant performance as M’s mother – though her character is revealed more through dialogue by others than through her actions – but Buddy Garrison as M’s father is the undeniable star of the show.  A stoic man nearing retirement, wanting to feel love and gratitude while struggling to accept his son, who personifies all his deepest regrets.  Every criticism of M he doles out comes with a palpable feeling of the responsibility he feels and a refusal – like his son – to admit they are not so different in their stubbornness.  The two’s relationship during these scenes pairs nicely with David B. Vogel’s light design: a single bulb above a table center-stage radiates a dark ambience akin to an interrogation room.  Two men analyzing each other’s failings – less to attack, more to understand.

The focus on understanding is by no means incidental; this is a play built on subjectivity that trusts its audience to distinguish reality, fantasy, and metaphor.  Viewers will feel an urge to carefully observe director Scott Cole’s quietly antagonistic scenes, trying to figure out their purposes in the plot as real or symbolic events while characters exchange callous glances and hold back horrible thoughts.  Custer’s script absolutely encourages this approach.  The production, however, struggles just a bit to support this invitation, mainly in its audio design.

During some otherwise silent scenes, pre-recorded dialogue between onstage characters plays.  While plainly not occurring in real-time, the exchanges nonetheless elicit direct responses from M and others.  The uncertainty this presents is thematically fitting, but Cole’s direction and Ethan Eldred’s sound design feels rushed.  The cast appear to have recorded their lines directly off the script, skipping quite a few (a problem also present in live dialogue during my showing, leading to some awkward conversation transitions), and their statements play back-to-back with almost no beats in between.  The approach and the script are at opposites; emotional moments pass by too quickly to resonate and are instead undercut.  A sequence towards the end, involving a repeated argument between M and W on whether she should leave him given she’s – essentially – already dead, is a good example.  The play switches between nearly identical versions of this scene and separate family/dream sequences to debate the impossibility of M’s reinvention and arguable permanence of his actions, but the repetition becomes exhausting when the breaks in the action fall victim to the audio design.  With so few breaths, it feels like the show is hurrying to restate the same question with little added while viewers are left behind, still pondering the meaning of the breaks.

The premise and approach of “This Too Comes By Hard” are compelling, and it tackles the subject of influence with enough layers to leave each viewer with a different – if somewhat tentative – interpretation.  The rushed design hinders greater takeaways from moments that deserve it, and it feels like the show closes with less a study of variable consequences than an idea on the subject restated.  Still, the foundation – script and performance – is sound.  Like M, the production should breathe, reassess, and give us time to hear its thoughts and concerns.  It has no shortness of meaning to explore, and certainly enough potential to change for the better.

Running Time: 65 minutes, with no intermission.

“This Too Comes By Hard” plays through July 23 at the Gallaudet Eastman Studio Theatre.  For more information, click here.