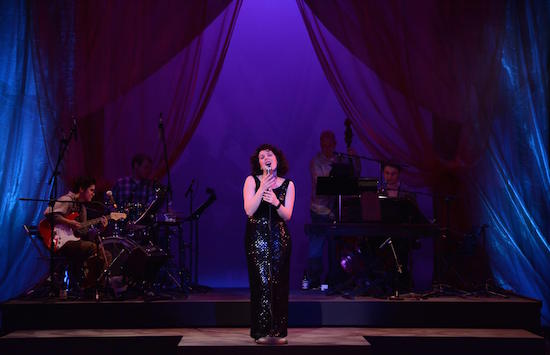 As a singer and fan of all things musical, I grew up with our family listening to Patsy Clines’s voice and songs. Until yesterday I just figured she had a long career given the impact and longevity of her songs. I was wrong, Patsy Cline died when she was only 30 years old. Tommy LaFrate directs this small and talented cast as they tell the tale of a small town girl who makes it to the Grand Ole Opry and beyond.

“A Closer Walk With Patsy Cline,” tells the story of a female country star’s rise to fame in a unique and tenderly humorous comedy of days gone by. Born with the name Virginia Patterson Hensley, her stage name was changed early, and her star soared quickly. Little Big Man, played by Andy Baldwin begins the tale at a radio station in Winchester, Virginia, the town where Patsy was raised. He narrates to fill in the specifics of the story of how she went from singing in the town to winning a talent contest, initially getting passed over to join the Grand Ole Opry, and finally getting her own album. Her popularity and success were recognized as Patsy Cline was the first female inducted into the Country Music Hall of Fame. Little Big Man entertains the audience with his 1950s clean cut humor and groaning bad jokes.

Throughout the show using live performances of detergent commercials sung by a small band of musicians, brings us back to a time and place where radio shows were tuned into like the season finale of M*A*S*H. It was an innocent time in our history where a person could walk into a radio recording studio and give a DJ a 45 record and ask to play it or even sing live. Sound engineer Wes Shippee and lighting designer Nathan Hawkins elegantly pull together the difficult technicality of a traveling show.

Patsy Cline’s range swelled from a rich contralto to the soft dulcet tones of a lyric soprano that gave this young star both power and beauty. Her delight in yodeling was toned down due to the norms of the day, but you can clearly hear that technique when you listen to recordings. Laura Stracko is an exemplary choice for this role singing Patsy songs. Ms. Stracko is near perfect technically and a beautiful mimic of Ms. Cline in voice and presence. The showmanship of being a country recording star, along with the outfits, the swagger, the humility and hairstyle facilitate mental time travel, making the tribute that much more believable.

Truly it is one thing to sing someone’s songs well, quite another to sing them in the style, meter and accent of this country icon. Hair and makeup marvel, Molly Walz, understands the hairstyles of the time and Patsy’s hair changed with her age. Looking at the real Patsy vs. Ms. Stracko’s Patsy, the resemblance truly is remarkable. Everyone who loves music is, of course, familiar with her biggest hit, “Crazy,” a song written by Willie Nelson. Other famous songs included “Just a Closer Walk with Thee” spotlighting her religious album, made after a near fatal car accident. “I Fall to Pieces” and “Bill Bailey” were also very recognizable even by non-country music follower, we had a little sing-a-long with the encouragement of Little Big Man. Hank Williams, and Elvis might have sung some of these songs first but Patsy made them her own, and they are glorious when she sings them.

Quinn Stone designed a set that was classic of the time, her name in BIG BOLD letters along with the simplicity of the singer, the band and the audience was the focus. Costume designer, Kristina Martin had several wardrobe changes bringing Patsy from the cute young Western Styled teenager to the more sophisticated sparkly star of a young woman. Each change of wardrobe Patsy became more sophisticated, glamorous, and comfortable with the sweet yet flirtatious nature of a female country star of that era. The band was small, as was the fashion in the day. Great musicianship with Bob Abbott on Bass, JP Coletta on Keyboard, a young and handsome Jay McCarthy on Guitar and Fiddle, and percussion by Mark Lucas. The dulcet tones of back up singers Dakarai Brown and Marc Pavan brought harmonies to life.

So, whether you grew up with Patsy Cline or you want to expose your kids or grand kids to this folk country entertainer it is a great show for all. I found it to be a delightful fun throwback to times gone by and 2 hours that you will find yourself doing some mental time traveling. Fun for the whole family, although those going down memory lane will enjoy it 3 fold.