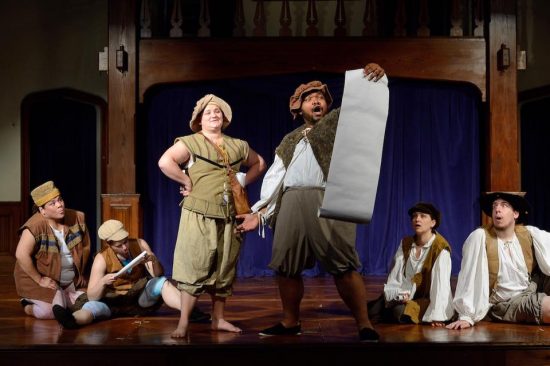 Delight, mischief, frolic, and fun abound at Baltimore Shakespeare Factory’s production of “A Midsummer Night’s Dream!” Intimately staged outdoors, this production is an experience, allowing you front edge seating, if you so please, amidst a backdrop of picturesque natural surroundings. Bring your lawn chairs, picnic blankets, some sweets and savories, and you’ll be all set for this magical, frivolous ride!

It’s clear that Baltimore Shakespeare Factory has fun in this show. You will too!

One of Shakespeare’s classic comedies, “A Midsummer Night’s Dream” calls us to imagination through a whimsical tale of summer love, fairies, and magic spells. In this story, nobleman Egeus is infuriated that his daughter Hermia has chosen a lover over another suitor he has selected for her to marry. Rather than bend to her father’s choice, Hermia runs away into the woods with her beloved Lysander to elope. Funny thing is, this an enchanted forest, filled with a fairy kingdom. There, a quarrel between Oberon, King of the Fairies, and his wife, Titania, sets off a comically chaotic chain of events where magic spells turn faithful lovers wayward!

Artistic Director Tom Delise frames a theatrical experience that lives up to the company’s aim to recreate Shakespearean plays as they would have been staged in Shakespeare’s day. Spectacle takes a backseat, as natural sunlight serves as the lighting design, while The Meadow’s abundant trees and expansive greenery serve as scenery around a modest platform. Forget about the fourth wall; there are no walls, as any area, including your picnic blanket, is within the world of the play (Note: Beware of hungry fairies!).

Language and character sell the show here, and this cast delivers on both, playing multiple, cross-gender roles, as in Shakespeare’s day. Elijah Moreland shows excellent command of diction as the regal Theseus, Duke of Athens, and Oberon. I enjoyed Micaela Mannix as Hermia’s sister Helena, and her utter disgust within one peculiar love triangle was richly palpable. Allie Press brings a playful swagger to her role of Puck, the mischievous spirit, while Liz Galuardi convincingly crafts a feisty, passionate Hermia. Shaquille Stewart really goes to work as Nick Bottom, weaver and amateur actor. In one instance, Stewart enacts an elongated, gloriously overdone stabbing scene-within-a-scene that is absolutely gut-busting! Jeff Miller adds even more hilarity to this scene with Stewart as Francis Flute in clumsy drag!

Music adds an additional treat. Music Director Jamie Horrell arranges contemporary tunes like “Love Potion No. 9,” “Love Shack,” and “Do You Believe in Magic.” These light-hearted melodies are performed acoustic-style by the cast throughout the show and are cleverly befitting of the themes.

It’s clear that Baltimore Shakespeare Factory has fun in this show. You will too!

‘A Midsummer Night’s Dream’ runs on weekends until July 23 at The Meadow at Johns Hopkins University’s Evergreen Museum & Library (outdoors) and at The Great Hall Theater at St. Mary’s from July 28-30 (indoors), both in Baltimore, MD. For tickets and information, click here.