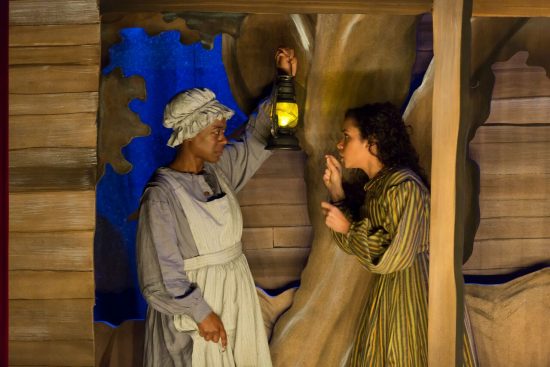 Erika Rose as Dido (L) and Kathryn Tkel as Zoe (R) in “An Octoroon.”Photo by Scott Suchman.

On July 18th 2017, Woolly Mammoth Theatre Company opened its 38th season with a bang in its second presentation of Obie-winning playwright Branden Jacobs-Jenkins’ “An Octoroon.” An evocative work that blatantly pours salt on the not-quite-healed wounds left as a result of institutionalized slavery and consequent racism, “An Octoroon” makes light of an organized system that has severely disenfranchised entire generations of people in order to expose people to the system’s absolute absurdity.

“An Octoroon” is an intensely provocative work…

Largely based on Anglo-Irish Playwright Dionysius Lardner Boucicault’s melodrama entitled “The Octoroon” and set in the Jim Crowe era American south, “An Octoroon” tells the tale of a young man who, as he’s inherited his late uncle’s plantation, has concurrently fallen in love with his uncle’s octoroon daughter (an octoroon is a person who is one-eighth black). Although the play is set in 19th century Louisiana, it feels incredibly contemporary as the broken dialect that is normally attributed to African and African-American slaves has been transmogrified into 21st-century black American colloquialisms. In true melodramatic fashion, “An Octoroon” is riddled with provocative scenes, appeals strongly to the emotions of its audience, and is even accompanied by live music throughout!

Admittedly, “An Octoroon” can be a bit difficult to watch as gross generalizations and, quite frankly, misrepresentation of persons of African and American Indian ancestry run rampant throughout the production (the wearing of black, red, and white face by both black and white actors, in addition to the [overly] played out stereotypes, may make those of the “I don’t see color” persuasion a bit weary). That being said, this is SATIRE (and is an adaptation of a work that is based on a 19th-century white man’s perception of slavery); the ultimate purpose of the production is to force people to feel… Something. What you feel, exactly, is entirely up to you.

Standout performances include that of Shannon Dorsey (Minnie) and Erika Rose (Dido). Interestingly enough, their respective portrayals of gossip-laden house slaves both grossly contribute to black women’s misrepresentation in contemporary society while also shedding light on the black woman’s plight. Additionally, John Hudson Odom (Benjamen Jacobs-Jenkins/George/M’Closky), James Konicek (Playwright, Wahnotee, Lafouche), and Joseph Castillo-Midyett (Assistant/Pete/Paul), each did wonderful jobs of portraying three characters without breaking a sweat. Lastly, Maggie Wilder’s portrayal of incredibly cute, love struck, and spoiled Dora was hilarious. Admittedly, just about the entire cast was hilarious at one point in time or another, but I’d challenge audience members to think about what portions of the production make them laugh and why.

“An Octoroon” is an intensely provocative work that intends to rip the bandage off age-old wounds in the most painful way possible. Make no mistake, “An Octoroon” is certainly an interesting watch, but one that, nonetheless, will prompt many a race-related conversation that may or may not be helpful to the greater good of mankind.

“An Octoroon” runs through August 6, 2017, at the Woolly Mammoth Theatre Company. For tickets and more information, click here.