Theatre Review: ‘Fabulation or the Re-Education of Undine’ at Port City Playhouse 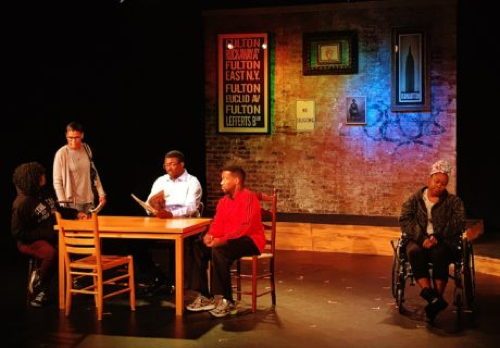 Cast of Fabulation or the Re-education of Undine. Photo by Matt Liptak.

“Fabulation or the Re-education of Undine” by Pulitzer Prize winner Lynn Nottage, follows Undine, a woman who abandoned her roots to run a luxury PR firm. Her trophy husband, Herve, leaves her and takes all of her money so Undine has to find her way again. She finds herself pregnant and back in her parent’s home whom she has not seen in 14 years. The story has great heart and is relatable no matter what your background is.

Undine was played by Tanya Baskin, a powerful actress who portrays the high-strung, overachiever well. She found a rhythm in Undine that never faltered and she flowed between scenes and direct address seamlessly.

The story has great heart…

Terry Spann played Flow, Undine’s brother, among other characters. Spann brought so much life and energy to the stage, it was electric. He was able to channel that energy and made a great scene partner. He was able to command the stage, but also relinquish it.

Another stand out performance was Reginald Garner as Guy, the man who comes into Undine’s life when she is at her lowest and falls in love with her. Garner’s joy and sincerity were charming and contrasted beautifully with some of the more difficult things that Undine was facing. He played the role sweetly and made for a good counterpart to Baskin.

The ensemble at Port City Playhouse was rounded out with Lexie Lounsbury, Alex Lopez, Marcela Onyango, Gayle Carney, Manny McCoy, and Kristra Forney-Wright. They all worked together very well and made excellent choices to distinguish their multiple characters.

The set was cleverly designed by Matt Liptak and gave the actors a lot of space to explore. With so much open space, the lighting, designed by Marzanne Claiborne, played a huge role in creating the world. It was a visually interesting production.

“Fabulation of the Re-Education of Undine” at Port City Playhouse will run through July 22. For tickets and more information click here.