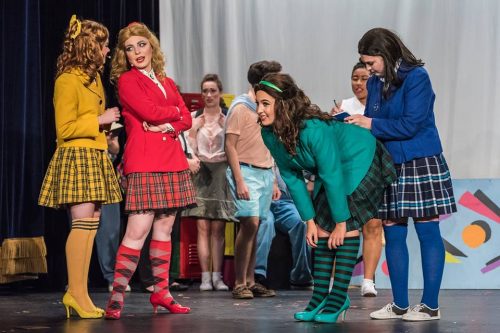 “Heathers: The Musical” by the Small Town Stars Theatre Company at the Carroll County Arts Council. Photo courtesy of CCAC.

Usually shows come into community theatre, especially musicals, that are familiar ones; that we saw in high school, were on Broadway, made into movies or just popular. “Heathers: The Musical” isn’t one of these, and that is unfortunate. However, part of the joy of being in a packed audience with patrons that didn’t have a clue what was going to happen, was the gasping, laughing, and amusement as the show unfolded before us. “Heathers: The Musical” is one of the finer written scores and shows I have seen, but its theme is dark and not quite digestible by High Schools (parents) or even colleges (parents). Popularity, acceptance, bullying with songs, suicide, promiscuity as well as homosexuality along with gracious uses of ungracious words are sprinkled generously throughout this show. And while it is in my opinion appropriate for teenagers, many parents might take exception to the raw message, as well as in-your-face sexuality and violence this show incorporates. Music and Lyrics are written by Kevin Murphy and Laurence O’Keefe combine difficult harmonies, melodies combine for a deep and humorous dark comedy.

“Heathers: The Musical” was an absolute blast of an evening!

Three uber popular girls all 3 with the name Heather are the reigning royalty of their high school in 1989. Based on a teen pop culture movie, Heathers, that starred Winona Ryder and Christian Slater, it has been described as a Bonnie and Clyde misadventure. The movie did not start out as a hit but eventually grew a sort of cult following. The Heathers are all pretty, popular, wealthy and mean. Costume designer (and vocal artist) Jennifer Secula, brilliantly shapes our understanding of the three Heathers from the beginning of the show by giving them identical Catholic School like outfits, but each with a different color: bold red, yellow and green. Throughout the show, we can tell our Heathers apart by color as well as deed. Veronica is an outcast would love to be accepted by the Heathers. By showing usable talent in forgery, Veronica slithers into the Heathers’ good graces and the slippery slope of giving away her soul for popularity begins.

This cast is amazing, the harmonies difficult, the choreography complex. The Heathers begin to show off their talent in a song called “Candy Store” which epitomized their control and status over their fellow students. In bright red, is the most dominant of the 3 Heathers, Heather Chandler, a star is born, everybody get out of her way! A talented blond beauty, Julia Creutzer was a perfect choice for this role, seated next to her fan club in the audience, she already has a following! Always in character, she was smug, condescending and when she sings “The Me Inside of Me” I am cringing and applauding her stage presence every moment! Her voice is clear, and her dancing sexy, she lets the audience know she was the one making the rules. Until she dies. Her heir apparent Heather, played by Jenna Hallock, is shallow and conceited, dressed in yellow she commandeers the red hair bow upon Ms. Chandler’s passing. Sort of like passing the baton, but more horrible. The third and sweetest Heather, dressed in green perhaps has some redeeming qualities (bulimia exempted), is played by Nina King. All of these women can sing and dance, and they are commanding of your attention you really can’t take your eyes or ears off them.

Kyle Secula plays Ram Sweeney and Shamus Beck is Kurt Kelly, two popular football players with a knack for harassment, I learned to love these hormone laden lads. Super slow-motion fight shows skinny new kid Jason “JD” Dean, played by Curtis Lee, take down the football players while singing “Fight For Me.” Veronica is smitten at first sight, fight. Bad boy JD, a young man who gets high on slurpees, but has a real problem with authority and people who make other people cry. I don’t want to ruin the plot, but some of my greatest laughs came from watching those two football players get their comeuppance. These two team up to have the audience in tears of laughter as they sing about how a certain body is blue. Some of the older members of the audience are gasping at this point, I cannot stop laughing.

Abigail Weinel plays the misfit Veronica, and early in the show understands that you need to do some terrible things to stay with the popular kids. Upon upsetting the Heathers at a party, Ms. Weinel sings “Dead Girl Walking” with voracity and power showing she is both terrified, disgusted, and excited by her new found popularity. How devastating it will be to be scorned, and shunned. Ms. Weinel has the voice, stage presence and dancing ability to play in any theater in the country, that is how talented she is! If she can’t be known as a good girl, then she will, in her words: “I could change my name and ride up to Seattle, But I don’t own a motorbike. Wait…here’s an option that I like: Spend those thirty hours gettin’… freakay!” J. D. is happy for Veronica sneaking into his bed taking advantage of him. But she was a nice person, a good person with friends from her life B. P. (Before Popular) has her best friend Martha Dunnstock, played by Aly Jay. Martha is tormented especially about the fact that she kissed a boy in kindergarten that ended up as a popular kid on the football field. Aly Jay has an amazing voice and at the end of the day, she is the friend that we all have that is faithful and true, despite our shortcomings. Veronica and JD’s song “Our Love is God” sounds like a church hymn but creepy, as J.D. is killing off those who have wronged his girlfriend and the other misfits.

Erik Secula, plays Big Bud Dean, Ram’s dad, and Ben Krepps is Kurt’s Dad team up after the apparent gay suicide of their sons. In a show stopping tribute to their forbidden love, they sing the controversial words of “My Dead Gay Son.” But more than watching what was going on upon the stage, the audience was howling and gasping with laughter. You had to be there…

Double teaming as Veronica’s mom and Ms. Fleming a school counselor Jennifer Secula (wow, Secula family, mind leaving some talent for the rest of us, enough already) attempts to bring suicides to the attention of the community and a spiritual kind of retreat singing “Shine A Light.” Her moxy is beyond description as she points to a male member of the audience declaring…. something that this writer is unable to post to paper.

Sound design by Tori Pie with her able assistant Cian Pickron make your listening pleasure look easy and easy it ain’t. With all the action, dancing, falling, flipping, and lovemaking, the mics can get a wee bit wonky. Lighting designer Jacob Bartholow is dim, but only when absolutely necessary. Pit Director, Tyler Richmond produces a glorious big orchestra sound with the help of the talents of Alex Ruth on keyboard, Maxwell Trdina on bass and Matt Kaufmann on the drums; to me, it sounded like at least a 10 piece band.

I hope you were able to get to this glorious show. I left the theatre in such a happy mood! “Heathers: The Musical” was an absolute blast of an evening! Worth the drive to Westminster!

“Heathers: The Musical” was presented by the Small Town Stars Theatre Company and ran through July 30th at the Carroll County Arts Council. For information about future shows, click here.