Theatre Review: ‘Junie B. Jones is Not a Crook’ at Adventure Theatre MTC 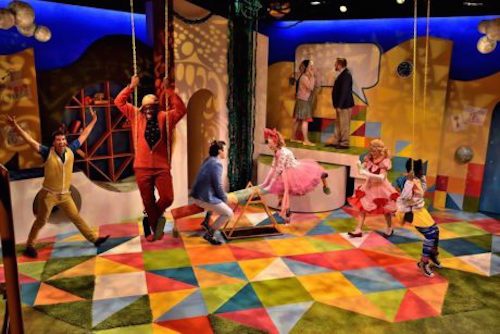 The cast of Junie B. Jones is Not a Crook. Photo by Bruce Douglas.

ATMTC’s latest production follows everyone’s favorite kindergartner, Junie B., as she gets herself in and out of trouble again. The book series, written by Barbara Park, includes 29 books about Junie B. as she navigates her way through kindergarten and first grade. The play adaptation of “Junie B. Jones is Not a Crook” is by Allison Gregory and was directed by Rick Hammerly.

This production is a ton of fun, for grown-ups and kids…

The play follows Junie B. as she tries to find out who stole her furry mittens that her Grandpa Frank Miller bought for her for no reason. Along the way, she finds a pen of many colors and decides that since “finders keepers, losers weepers” is the rule, she should keep it instead of looking for its rightful owner. In addition to her own mystery, the arrival of a new handsome boy named Warren is putting intense strain on her friendship with That Grace and Lucille. In the end, Junie B. learns a valuable lesson about not taking what doesn’t belong to you and being yourself is the best way to make friends.

Megan Graves played the role of Junie B. with enthusiasm and charisma. She has an excellent skill of connecting with and relating to the children in the audience in a natural way. It is a physically demanding role and she keeps up with the physical energy and abrupt emotional shifts that would be true of a real life almost six-year-old.

Junie B.’s two best friends, Grace and Lucille, were played by Natasha Gallop and Sophie Shulman. They took something that we see in a lot of stories featuring teenagers and adults, two friends fighting over a boy, and brought it down to the kindergarten level in a delightfully charming and relatable way for all ages.

The cast is rounded out with Chris Galindo playing Junie B.’s boyfriend Ricardo, Marquis D. Gibson as Meanie Jim, and Elliott Kashner as Handsome Warren. The adults in the play are Jessica Laruen Ball and Keith Richards. This ensemble works so well together and they cannot miss a beat as this show is so fast paced.

Douglas Clarke designed a beautiful set that allowed the actors to play and explore while inviting the audience into their world. It featured monkey bars, swings, book shelves, and all sorts of toys and games hidden throughout the set and in the ceiling. The eyes of the children sparkled at this fantastical version of a classroom, bedroom, and playground.

The original music for this production was composed by Todd Robinson. The score was delightfully whimsical with driving beats and clever melodies that linked every moment and transition together seamlessly.

This production is a ton of fun, for grown-ups and kids, people who love Junie B. and people who have never heard of her. It brings the whole audience into the mind of an almost six-year-old and reminds us that most of us still experience the things we did then. It is almost too much fun to be as heartfelt as it is.

“Junie B. Jones is Not a Crook” runs through August 14. For tickets and more information click here.