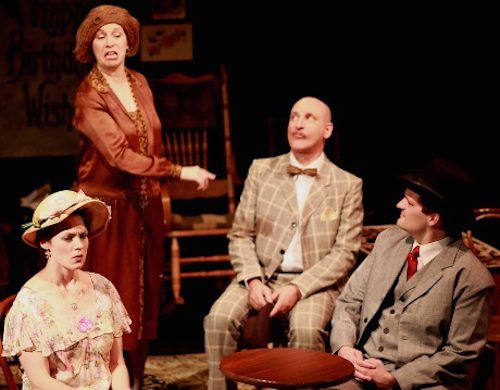 In a 1986 interview with the New York Times, screenwriter and playwright Horton Foote once said, “I’ve known people that the world has thrown everything at to discourage them, to kill them, to break their spirit. And yet something about them retains a dignity.” What can you expect from the man who won the Academy Award for Best Adapted Screenplay for the 1962 classic film “To Kill A Mockingbird?” I think that it’s in this spirit that he began to write “Night Seasons.”

I can’t think of a better play for a theatre company “finding truth and beauty in the everyday.”

Directed by Jack Sbarori, the play centers around The Weems family, a well to do family in Texas with close ties to their bank. This results in a lot of backward money handling. Beyond the story, you can sense that there is a higher sense of responsibility that compels each character to act in a certain way. When “Night Seasons” premiered on Broadway in 1994, Ben Brantley pointed out that, as with other Horton Foote plays “everything and nothing happens.”

Jane Squier Bruns plays Josie, the matriarch who, together with the men of the family, spins a constricting web around the other female characters. The problem is that one day she wakes up and realizes she is also in that net. Having lived past her children to the ripe old age of 93, Josie ruminates “maybe living is my punishment.” Bruns is masterful in portraying the character’s drifting between two different ages.

Caught like a butterfly in this web of family drama is Laura Lee Weems, played by Quotidian veteran Carolyn Kashner. This Helen Hayes nominated actress shines, especially in scenes where she finally gets up the nerve to break her ladylike conventions and confront her mother directly.

Laura Russell plays the fiery Delia, a kind of foil to the other ladies of the Weems family. If they are a family of birds in greeting cards, she is the bird that is beating her wings against the cage. Russell plays her with an indomitable fire that lights up the stage.

Her husband is the antagonistic Thurman Weems, played by David Dubov. His chemistry with his wife Delia is palpable, especially when it borders on caustic. He will be playing Bottom in Quotidian’s upcoming Irish rendition of “Midsummer Night’s Dream.”

Jennifer Osborn and Timothy Ziese lend some gorgeous vocals to their characters of Josie’s niece Rosa, and Mr. Barsoty, respectively.

Director Jack Sbarbori doubles as the set designer.  The otherwise realistically rendered set is covered in greeting cards with beautiful birds on them. They feel as confined and beautiful rendered as Laura Lee.

Don Slater designed the lights which included a beautiful faux scrim where voices from the past sang out to the characters in the play and Stephanie Mumford, Quotidian’s resident costume designer, designed the gorgeous costumes.

If Tennessee Williams were to rewrite Anton Chekov’s “Three Sisters,” I imagine it would look and feel a lot like Horton Foote’s “Night Seasons.” Foote has a sympathy for his characters that is so rarely seen and refreshing. I can’t think of a better play for a theatre company “finding truth and beauty in the everyday.”

“Night Seasons” runs at The Quotidian Theatre through August 13. For tickets and more information click here.