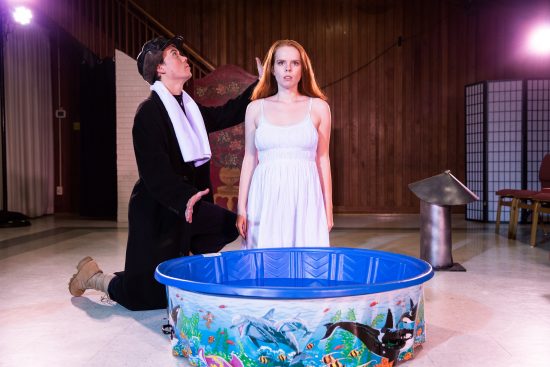 What’s a liberal, “open-minded” parent to do if your child chooses to believe in ideologies that you find conservatively close-minded? This is the fascinating question posed by “Oblivion,” written by Carly Mensch (a producer and writer on “Orange is the New Black”) and presented by Unexpected Stage Company, which I had the great pleasure to view on Saturday, July 29, 2017.

You will undoubtedly experience moments over the course of the play that cause you to examine some of your own beliefs and behaviors, and this is a good thing!

The play focuses on Julie, the teenage daughter of Dixon and Pam, who makes the unexpected decision to become a Christian, much to the horror of her very secular parents. As the play unfolds, the irony of Pam and Dixon’s situation begins to put a strain on their marriage as their violent opposition to Julie’s conversion causes them to deeply wrestle with the question of whether their innate dislike of what they view as a close-minded religion ultimately means that they themselves are not the universally accepting, open people that they fervently believe themselves to be.

The play was intimately staged in the Fireside Room of the River Road Unitarian Universalist Congregation Building which only seated forty audience members. Rather than sit in front of a stage, we were divided into two rows on either side of the floor so that the action and emotions took place right in our midst. I found the arrangement powerful and enjoyed the up-close experience.

Julie was played with brilliance by Ruthie Rado. She gave us the surly teenager who was at odds with her parents, but she also brought a heartfelt questioning and longing to her search for a relationship with God and a vulnerable fragility to her concerns over her sexual orientation. The moment when she asks questions of God was stunning in its simplicity and I greatly appreciated the understatedness of Rado’s performance throughout the entire play. Rather than portray a teen on a charismatic spiritual high, Rado gave us a thoughtfully quiet portrait of a carefully considered religious conversion.

Her friendship with Bernard, played by Jonathan Frye, was a focal point of the show and Bernard was in fact my favorite character. Frye infused his character’s youthful passion and creative drive with a quirky energy that was truly delightful to watch. I especially loved what Frye would do with his eyes, whether he was staring distressingly at Julie’s parents, or excitedly waiting for a reaction to his film. His brokenness when he learns a devastating truth was painful to watch as his ebullience transformed to heart-wrenching grief.

Mindy Shaw played the role of Julie’s mom Pam with fiery conviction and hellfire. Although Pam considers herself completely secular, her devotion to her own beliefs and her need to conform her family’s beliefs to her own reminded me the most of a stereotypical religious zealot. Shaw could be frightening in her need to dominate the worldview of her family and in her relentless excavation of the truth.

At first I intensely disliked her character (but not the actor, because Shaw was bringing Pam to life with the realest of emotions and it was thrilling to watch!) However, I later felt more sympathy for Pam when I realized that organized religion was so foreign to her that she felt genuinely terrified that her daughter was being brainwashed into a cult. I felt that Pam actually experienced the most spiritual transformation in the course of the play and I loved the ending, which I won’t spoil for you.

The fourth character in this tiny cast was Dixon, Julie’s father, played by Zach Brewster-Geisz. Dixon was the epitome of a parent striving to be the “cool dad” who was “chill” with everything. He smoked weed, he was non-judgy of Julie’s potential choices to do drugs, have sex, or go to raves, and he tried to be the ultimate buddy to both Julie and Bernard.

As you might suspect, this hands-off parenting approach becomes quite problematic for Dixon over the course of the play, impacting his marriage as well as his own potential life course and Dixon’s true parenting choices are ultimately revealed to be much less ideal and beneficial to Julie than he likes to pretend to himself. Brewster-Geisz did a great job maintaining the complete affability of Dixon as a contrast to Pam’s intensity and I enjoyed his performance immensely.

The set designed by Kristen Jepperson made perfect use of the uniqueness of the performance space, blending the Fireside Room’s bookshelves and grand piano effortlessly into the living space of the family by adding some choice reading material and family photos. By using small screen dividers and a few tiny set changes she was able to easily bring us into some alternate locations over the course of the play.

The set changes were assisted by Lighting Designer Andrew Dodge, who had brought in a few standing stage lights in order to transform the unusual performance space into a professional theater set. I especially enjoyed the spotlights on Bernard whenever he talked to Pauline. I was never quite sure if Bernard was reading literal letters that he had written or if he was truly praying and I know that the lighting aided the intentional ambivalence of these powerful moments.

I highly recommend “Oblivion,” directed by Christopher Goodrich for Unexpected Stage Company. You will undoubtedly experience moments over the course of the play that cause you to examine some of your own beliefs and behaviors, and this is a good thing! Yet, the play will leave you with the sweet paradox of unity co-existing in the midst of contradictions.

Advisory: Explicit sexual language and profanity. Not recommended for children under age 18.

Running Time: Two hours and fifteen minutes, with one intermission.