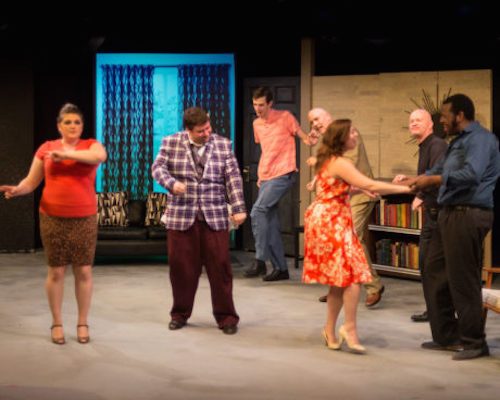 The cast of ‘One Man, Two Guvnors.’ Photo by Harvey Levine.

Humans have been laughing at the same things for centuries. Specifically, vices such as lying, greed, and lust, have been central themes of comedy since the ancient Greeks. “One Man, Two Guvnors” is simply a more modern riff on comedy, specifically commedia dell’arte. We love these stock characters because we can identify them in almost any story, and whether we want to admit to our not, we recognize ourselves in them.

“One Man, Two Guvnors” is a truly delightful show that anyone will find humorous.

“One Man, Two Guvnors” follows Francis Henshall (Nathan Tatro) who is a servant that finds himself working for two masters. The first, Rachel Crabbe (Kristen Pilgrim) is disguised as her late twin brother until she is able to reconnect with her lover and brother’s murderer, Stanley Stubbers (Anderson Wells), who also happens to be Henshall’s second master. What ensues is a series of hilarious mistakes that keeps Henshall from food, and Dolly (Amanda Spellman), the woman he is interested in. Of course, the show ends with a happy ending.

William T. Fleming directed this production and brought in a wonderful addition: a skiffle band. Skiffle is a type of popular music from the 1950s that was developed in England. This added a wonderfully playful element during the breaks and they added musical interludes to the scene transitions. The boys in the band were wonderfully engaging performers and seemed comfortable interacting and joking along with the audience. They were truly a highlight of the production. The band consisted of Danny Santiago on lead vocals/guitar, Nick Huff on bass, and Tyler Golsen on percussion.

Nathan Tatro played the role of Francis Henshall with great energy and mischief. The twinkle in his eye and sly smile made for an adorable and almost relatable character. Tatro flowed effortlessly from dialogue to direct address. He also interacted with the audience well, even if it didn’t necessarily go as planned.

Pilgrim and Wells were wonderfully bossy masters for Tatro and also well-teamed partners when they came together. Both were dynamic and expressive who brought strong energy to the stage. They played their overly dramatic roles well and as believable as an actor can get in a farce.

Other stand out performances were Lena Winter as Pauline, the ditzy love of Alan, played by Daniel Riker, who is overly romantic and wants to be an actor. Lenora Spahn plays Alfie, a bumbling old man with gloriously uncomfortable facial expressions. The rest of the cast includes Kevin Dykstra, David Flinn, Greg Garcia, Amanda Spellman, and Jacy D’Aiutolo.

Fleming also designed the set which was loads of fun. The walls revolved and a series of doors appeared and disappeared based on where the scene was. It also had room for well-designed projections, by Steve Deming. The set offered some wonderful space for the actors, and sometimes the audience, to play in.

“One Man, Two Guvnors” is a truly delightful show that anyone will find humorous.

Running Time: Two hours and 15 minutes, with an intermission.