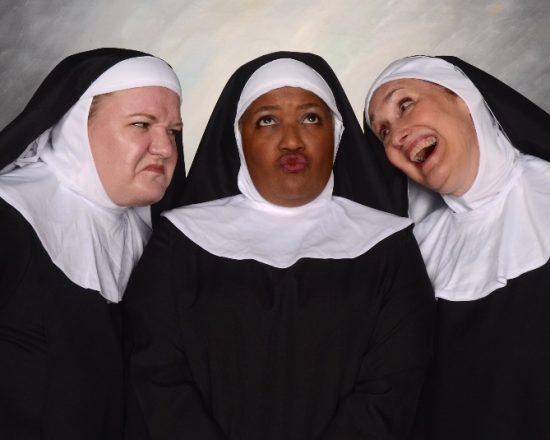 It’s kinda funny – I keep falling in love with the same story.  I fell the first time when I saw the Whoopie Goldberg movie in 1992.  I fell the second time when I saw the Broadway musical version with Patina Miller in 2011.  And I fell the third time when I saw it last Friday night.  I’m talking about “Sister Act” and the fantastic production now running at Cockpit In Court.  This Menken and Slater musical (part of the same team that penned “The Little Mermaid”) is being given a rafter-raising outing this time out and it’s a true blessing.

Directed, choreographed and costumed by the indefatigable Tom Wyatt, this version hews fairly close (given the budget constraints of locally-sourced theatre) to the Broadway version.  Wyatt has built a show that clips right along, filled with terrific choreography (never better than in the full-blown production numbers like “Sunday Morning Fever” and “Raise Your Voice”), great pacing and is beautifully dressed to boot.  Speaking of boots, Tom, you know I’ve got my eye on those boots of Deloris’, right?  Anyway…let’s get the book report out of the way so I can tell you what I really thought.

Cockpit In Court’s production of “Sister Act” will make a believer out of you.

Deloris Van Cartier is an aspiring Disco Queen, toiling away in her gangster boyfriend’s (Curtis) nightclub.  When she accidentally witnesses him kill somebody, she runs to the police station where she meets an old school chum (now a cop) named Eddy.  Eddy arranges for her to hide out at a convent until she can testify. There she molds the ragtag choir into a show-stopping powerhouse that transforms the down-at-the-heels church into a veritable temple of song.  Unfortunately, the publicity reveals Deloris’ hideout to Curtis and she has to decide whether her allegiance lies more with saving her skin or standing with the sisters to face the bad guys and pursue her budding romance with Eddy.  That’s the story in a nutshell.

Scenic Designer/Artist G. Maurice “Moe” Conn has designed a wonderful set that segues nicely from nightclub to police station to church and bar with quick set changes.  The whole thing is lit well by Kacey Conn.  There are some sound issues that will hopefully be worked out during the run.  The orchestra is competently led by musical director Nathan Scavilla (who makes a surprise appearance as The Pope!) and the chorus handles the 70s inspired score with skill and grace, particularly in the outstanding harmonies from the newly renovated Sisters.

And about those sisters – holy smoke, can they sing!  Every one of them has a terrific voice and the degree of comedic timing is impressive as h-, I mean heaven.  Of particular note are Maribeth Vogel as Sister Mary Martin of Tours (she’s funny even when she’s just standing still.) Judy Ricci as Sister Mary Patrick is channeling Kathy Najimi from the original movie brilliantly. And she can belt with the best of them.  And bless Sherry Benedek.  Her Sister Mary Robert starts out as shy as a shrinking violet but when she lets that big voice loose watch out!  She blows it out the pews during her big number, “The Life I Never Led.”  Also on deck is Lauren Lowell as Sister Mary Lazarus. She is a first-rate rapper with a face she can screw tight as a pinched nerve.

Jane C. Boyle’s Mother Superior has the air of a long-suffering mother hen, trying desperately to keep church and flock together. As she grudgingly acknowledges Deloris’ contribution it is readily apparent that Boyle is a class act and knows how to convey emotions through her lovely singing like a pro.  “Here Within These Walls” is a touching testament to the comfort she finds in the sanctity of the Church.

On the other side of the law, Curtis’ henchmen lend a lot of comic relief that doesn’t hide the big talents on display.  Dorian Smith (Pablo) is a well-trained dancer and funny (if a little stereotypical), with an unruly head of hair and some super slick moves.  Jeff Burch serves his part splendidly with all the trimmings as Joey.  And Tyrell Stanley is delightfully stupid as TJ with some mighty cool moves of his own. All three have very good voices but it’s the Three Stooges vibe that makes them each a standout.  Jake Stuart is fittingly scary as badazz gangsta Curtis.  He has a laser focus on his character and it never waivers.  When he sings “When I Find My Baby” he is eerily calm but the menace is palpable.  The guy sings and acts like he was born to it.

Troy Haines Hopper is a veteran of stages all over the area and he never disappoints.  With a voice as smooth as hot-buttered soul, he radiates kindness as Eddy.  He is a pro through and through.  Even when playing a part that has the character questioning whether or not he’ll ever get the girl, he’s able to do it with such skill that I know lots of folks in the audience wanted to stand up and tell him, “that’s alright, boo, you’re gonna be fine!”  His face is an open book and he uses his body like a finely tuned instrument (the guy can dance!) Truly a treat to watch.

But “Sister Act” sinks or soars on the strength of the main character.  And honey, this one is in the stratosphere.  Ms. Rikki Howie Lacewell is hip-shot, smart-mouthed, butt-shaking, finger-snapping, lip-smacking fierce!  Hold your hats and hallelujah, Rickki’s gonna show it to ya! Despite some problems with her mic, Lacewell brings just the right mix of bravado and tenderness to this part. With a voice that can charm the angels one minute and scare the devil the next, she lays it all on the stage and then some. In numbers like “Fabulous” and “Sister Act,” she has a skill level that is show-stopping time and again.  This is how you command a stage, ladies and gentlemen.

So go get your religion on folks, regardless of your denomination.  Cockpit In Court’s production of “Sister Act” will make a believer out of you.