Theatre Review: ‘The Happiest Place on Earth’ at The Hub Theatre 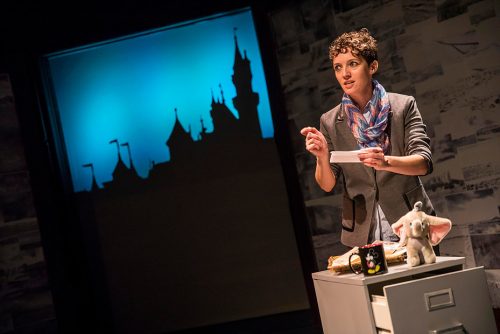 Tia Shearer (Philip Dawkins) in “The Happiest Place on Earth” at The Hub Theatre in Fairfax, Virginia. Photo by DJ Corey Photography.

A little bit of theatre magic is taking place in Fairfax in this one-woman production that explores the peculiarly American perspective on happiness, one in which its attainment is as much an entitlement as our freedom to pursue it.

“The Happiest Place on Earth” is truly one of this year’s most moving theatrical experiences.

Philip Dawkins (Tia Shearer) tells the story of his mother, aunts, and grandparents, living in Albuquerque, New Mexico in the early 1960s, who, in response to a sudden family tragedy, head to “The Happiest Place on Earth,” the recently inaugurated Disneyland, seeking solace in a place where unhappiness is simply not allowed and the answer is never “no.”

The immensely talented Tia Shearer (Philip Dawkins) invites you into the story with a warmth and honesty that will make you think, make you laugh, and when you least expect it, feel that familiar catch in your throat.  Shearer gracefully conjures the aunts, grandparents, and family friends who fill the story, and in a particularly moving scene, brings the audience to tears when on her first visit to the Magic Kingdom, Philip’s seven-year-old mother asks Cinderella, “when will I be happy again?”

Deceptively sparse, a set that features a framed photograph and a clunky filing cabinet comes alive with images that seamlessly weave family history, American history, and the Disney characters that have accompanied us all, an inescapable feature of American culture, symbolic of the universal themes of love, longing, and loss.

An unconventional piece, one of director Matt Basset’s most compelling choices was to cast a woman in the role of Philip, sending a powerful message that children are children, people are people, and all else is superficial in the universal struggle to be happy.

Playwright Philip Dawkins, on whose life the story is based, has created a masterful piece that will challenge, inspire, and comfort audiences brave enough to look deeper into the American quest, nay demand, for happiness.  “The Happiest Place on Earth” is truly one of this year’s most moving theatrical experiences.

“The Happiest Place on Earth” runs through July 23 at The Hub Theatre, 9431 Silver King Court, Fairfax, Virginia 22031.  For more information or to purchase tickets, click here.