Theatre Review: ‘The King and I’ at The Kennedy Center 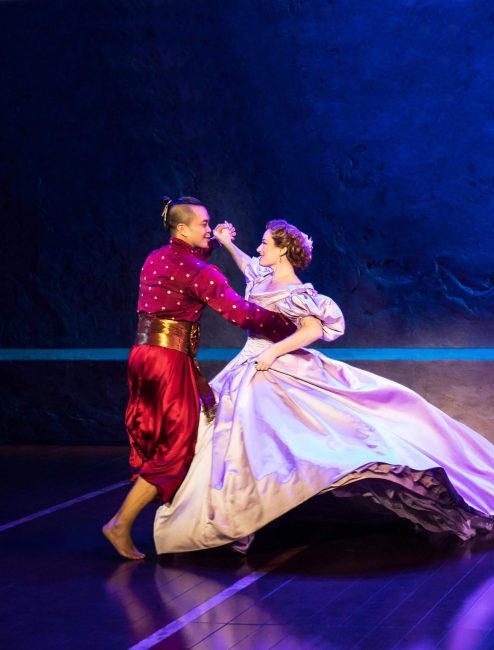 Jose Llana and Laura Michelle Kelly in Rodgers & Hammerstein’s ‘The King and I.’ Photo by Matthew Murphy.

On stage in the gorgeous Opera House of The John F. Kennedy Center for the Performing Arts, Rodgers & Hammerstein’s “The King and I” takes audiences on a captivating and heartwarming musical journey to 1860s Siam. The Tony Award-winning revival, directed by Bartlett Sherr, is beautifully done, capturing the beloved songbook, traditional dance and eye-catching dress of the time while touching on the contrasting cultures of East and West, family duty, friendship and forbidden love.

After the powerful Overture led by Music Conductor Gerald Steichen, the opening sees teacher Anna Leonowens played by lovely Laura Michelle Kelly and her son Louis (Graham Montgomery) arrive by ocean liner on the shores of the Chao Praya River in Bangkok. An authentic sense of place and period is established throughout the production thanks to the realistic sets of Michael Yeargan, effective lighting by Donald Holder and exquisite costumes of Catherine Zuber.

Excited for what’s to come, Anna exudes warmth and sweetness from the start, as Kelly (who also starred as “Mary Poppins” on Broadway), brings her pure and enchanting voice to notable numbers such as “I Whistle a Happy Tune” and “Getting to Know You.”

It’s hard not to resist Anna’s sunny and nurturing disposition, and it’s delightful to observe her growing, yet guarded friendship with the King of Siam, brashly portrayed by Jose Llana who puts the etcetera in the etcetera with his strong presence, wit and remarkable voice showcased in “A Puzzlement” and other songs with the talented company. Despite the chauvinistic nature of the King who has enough children from his many wives to fill a schoolroom, Llana shows other facets of the royal, who can be charismatic, curious, vulnerable and hilarious at times.

Equally intriguing is Tuptim, a slave girl and gift from the King of Burma, played by Manna Nichols, who moves everyone with her striking solo “My Lord and Master.” Together with her secret love Lun Tha, played by Kavin Panmeechao, they profess their passion in the rousing duets “We Kiss in a Shadow” and “I Have Dreamed.”

Movement is very much an important element of “The King and I.” Choreographer Christopher Gatelli who oversees the original choreography by the renowned Jerome Robbins brings the intricate ballet “The Small House of Uncle Thomas” to life with precise, delicate and energetic gestures set to a story within the story. The memorable “Shall We Dance” with Anna and the King gracefully gliding and singing in his study is also quite grand to watch.

There is a reason that Rodgers & Hammerstein’s “The King and I” still resonates today as it did when it premiered on Broadway back in 1951 as it represents musical theatre at its finest.

Rodgers & Hammerstein’s “The King and I” runs through August 20, 2017 at The John F. Kennedy Center for the Performing Arts. Information and tickets are available here.