Theatre Review: ‘The Mark of Cain’ at Synetic Theatre 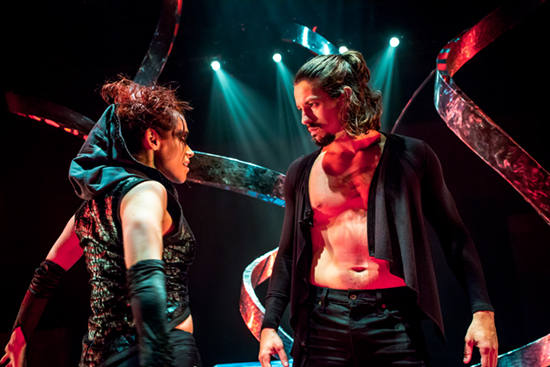 Making the story of creation feel new might seem like a daunting task, but it’s one that Synetic Theatre tackles, and conquers, in its new production, “The Mark of Cain.” The debut piece, directed by Paata Tsikurishvili and choreographed by Irina Tsikurishvili, is an insightful, bewitching parable for our current moment, spoken through movement and music.

Adapted from the biblical story by Paata and Irina Tsikurishvili, Tori Bertocci and Nathan Weinberger, audience members need not have any familiarity with Genesis to enjoy the production. We begin at the beginning, with God (Philip Fletcher) and his creation of Adam (Scott Brown) and Eve (Tori Bertocci), following them through their temptation, here by a Dark Angel (Kathy Gordon), leading to the couple’s expulsion from Eden. These first humans soon become parents to sons, Cain (Ryan Sellers) and Abel (Dallas Tolentino). After his parents’ death, a grieving and frustrated Cain grows increasingly hostile towards his brother, eventually murdering him. As punishment, God marks him for his sins. Exiled from God’s grace, Cain partners with the Dark Angel, becoming both her dupe and accomplice. She installs him as different powerful figures through centuries of human history, through the present day.

The intriguing set design, a collaboration of the director with Phil Charlwood, reflects Tsikurishvili’s surrealist approach. A twisted metal structure with serpentine spikes, the Tree of Life, takes center stage, with two glowing eyes on either side that are reminiscent of pagan iconography. The story may be rooted in Christian mythology, but the symbolism appears more universal.

Under Paata Tsikurishvili’s direction, the production hits just the right rhythm. Spectacular dance sequences are leavened with moments of stillness and reflection, even as the action reaches its peak towards the latter half.

…an insightful, bewitching parable for our current moment, spoken through movement and music.

A wordless production, Irina Tsikurishvili’s eloquent choreography provides much of the storytelling and emotional landscape of the piece. In one masterful sequence, the ensemble recreates centuries of warfare, signaling the shift from messy Medieval battle to the lock-step robotic movements of 20th-century fascism. These large-scale ensemble pieces complement other intimate moments, such as an earlier interlude which finds a regretful Cain reunited with the specters of his dead family. The way the performers gently bob and slide away from him, as though floating on water, is both beautiful and haunting.

These quiet moments also provide an interesting psychological depth to Cain. Ryan Sellers is powerfully confident in the role, physically conveying the character’s shifts from sullen grief, to dead-eyed rage. Sellers’ gift for comedy offers many light moments as well, especially in his last incarnation as a reality-TV personality turned demagogue.

As the production progresses, the fine-tuned partnership of the design team becomes clear. Composer Koki Lortkipanidze and music director Irakli Kavasadze create a dynamic soundtrack that charts the historic and emotional journey of the piece, as instrumentals give way to the synth pop of the present day. Simple costuming by Alison Samantha Johnson allows for characters’ easy transitions between time periods. Brian Allard’s tonal lighting design mirrors the story’s emotional registers of anger, calm, or chaos.

As the production passes through the nightmares of our current age, towards a dystopian fallout, it remains exploratory without seeming moralistic. As a surrealist work, it does not provide answers but poses some excellent questions. It may be that only God can judge, but in my opinion, this profoundly original and captivating evening of theatre should not be missed.

Advisory: This show is recommended for ages 13+ for mature content.