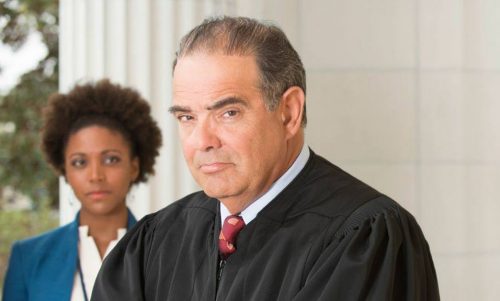 There are few political figures in the past few decades more polarizing that Supreme Court Justice Antonin Scalia. He had some very controversial opinions but believed himself to be an Originalist, one who believes that the US Constitution’s is stable from the time it was written. His passing away last year resurfaced many reflections on his 30 years as a Supreme Court Justice. Many perceived him to be a monster. Justice Scalia even played into that at times but what if he also had a heart. That is what ‘The Originalist’ by John Strand uncovers. Arena Stage Artistic Director, Molly Smith, directed the production.

Justice Scalia has just accepted Cat, a socialist Harvard Law graduate, as a law clerk. They make for excellent debate partners and find that they both have things to learn from one another. When they are faced with one of the most contentious in US Supreme Court, they must find common ground.

Edward Gero reprises his role as Justice Scalia with power and grace. He gives the Justice vitality despite Scalia being in his 70s. He is rigid yet gentle and turns Scalia into a real person instead of the heartless man that so many believe him to be.

Cat was played by Jade Wheeler, an intense actress who partners well with Gero. She holds her own on the stage and brings out the similarities in Cat and Scalia.

They are met on stage by the brown-nosing Brad, played by Brett Mack. Brad is a young Republican who idolizes Scalia and works with Cat. Mack brings a ton of fiery energy to the stage and makes a great contrast from Wheeler and Gero.

The set was designed by Misha Kachman. It was ornate yet so simple, which made it even grander. The great desk rolled onto stage and partnered with the large red curtain and chandeliers truly evoked power and strength.

Colin K. Bills designed the lights, which played a huge role in the stage pictures. Cat’s dad, who is never seen, is in hospice and we know that based solely on the lights. Bills also created the Basilica at Catholic University using only lights.

This show is only set a few years ago so it resonates deeply and is a clear commentary on the political climate under President Obama. It is still relevant in the Trump administration. What if political opponents did meet in the middle? What about those people who don’t feel like they call completely on the right or left? ‘The Originalist’ makes the audience ask if they’d be willing to set aside their biases to listen to the other side.

‘The Originalist’ runs at Arena Stage through August 6. For tickets and more information click here.