Theatre Review: ‘Wickedest Tales of All’ by Phantasmagoria at Theatre Project 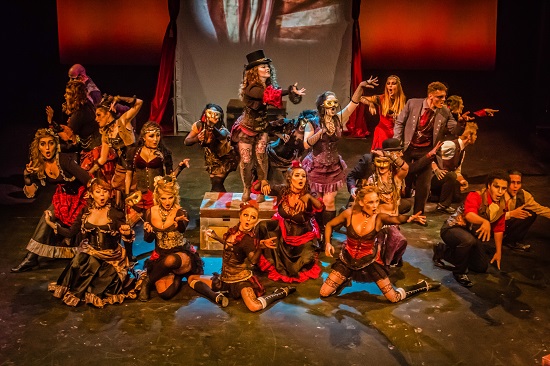 For 8 years the macabre steampunk storytelling troupe, Phantasmagoria has been giving audiences a unique theatrical experience.   Traveling all the way from Florida, Phantasmagoria’s presentation of the ‘Wickedest Tales of All’ plays through July 30th at Theatre Project in Baltimore City.

Who knew that a troupe from sunny Florida could be so dark?  Video projections of blood, spooky music, steampunk costumes and makeup, large scale puppets, and whimsical theatrical lighting help to set the mood for Phantasmagoria’s macabre brand of storytelling.

…Phantasmagoria is visually addictive.  Once you see it, you can’t unsee it…bloody good fun.

Created, written, and directed by John DiDonna, ‘Wickedest Tales of All’ features several stories, including Charles Dickens’ “A Madman’s Manuscript” and Edgar Allan Poe’s “The Masque of the Red Death.”

One aspect of the storytelling that I appreciate very much is the inclusion of ballet.  But this isn’t your normal pink tutu kinda of dance.  In speaking with performer Dion Leonhard DiDonna, several years ago she traded in her pink tuto for a goth costume and spray painted her pretty pink pointe shoes black.  Dancing since the age of 3, she has been on pointe for two decades.  Dion says that she prefers performing with Phantasmagoria rather than a traditional ballet troupe because of the extreme theatrical, no rules manner in which she gets to express herself.  And you can tell that she really enjoys what she is doing.  At times Dion is literally leaning over individual audience members, speaking to them and looking into their excited eyes as she touches their shoulder with her hand.

One dancer in the troupe also plays the cello in the performance.  In speaking with 19 year old Gina Makarova, I learned that this dancer also took up playing cello at the suggestion of her mother who said that “dancer’s have to be able to feel music.”  When not touring, Gina attends The University of North Carolina School of the Arts, focusing not on dance or music, but on theatrical wigs and makeup.  It is impressive to watch as Gina goes from dancing with great skill to immediately sitting down and playing a haunting tune on her cello.

Gina’s mother, Mila Makarova, also happens to be in the show as a dancer. Not only that, Mila is the choreographer.  But what stands out most for me about Mila Makarova is her work on the aerial hoop.  Rising above the stage, Mila performed tricks and stretches on the hoop, transitioning from one move to another gracefully.

‘Wickedest Tales of All’ is truly an ensemble piece.  Most of the hard working performers are on stage the entire time, telling spooky tales in a way that is bloody good fun. But I must warn you, Phantasmagoria is visually addictive.  Once you see it, you can’t unsee it.

Running Time: 1 hour and 20 minutes with no intermission.

‘Wickedest Tales of All’ by Phantasmagoria runs through July 30th at Theatre Project in Baltimore. For more information, visit online.