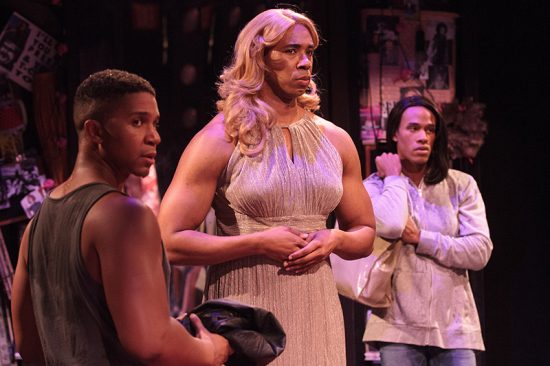 At various points during “Wig Out!,” characters pause to describe the experience that changed their life and self-image in an instant.  For most of them, it began with their grandmother’s wig. Fresh off an Academy Award for Best Adapted Screenplay for the beautiful, poetic achievement on black masculinity and sexuality that is “Moonlight,” playwright Tarell Alvin McCraney closes out Studio Theatre’s 2016-2017 Studio X season with the latest version of his 2006 play, “Wig Out!.”  McCraney teams up again with his longtime collaborator, director Kent Gash, as the two tackle the ballroom drag scene with remarkable depth and with open eyes towards lonely hearts letting themselves blossom even when the self is perceived as an act of defiance.

“Wig Out!” is a contemporaneous story told through dynasties and competing houses.  The House of Light, a drag club run like a family by the motherly Rey-Rey (Jamyl Dobson), receives a sudden invitation to a midnight drag ball hosted by longtime rival The House of Di’Abolique.  While Rey-Rey and crew struggle to prepare for the “Cinderella soiree” in time, their rising star Ms. Nina (Michael Rishawn) hooks up with outsider Eric (Jaysen Wright) following a sultry conversation on the subway.  As midnight draws nearer, Nina finds herself opening her mind, soul, and the House’s door to her one-night-stand, revealing inside a spectrum of individual identity that may not be welcome everywhere, but found shelter within the walls of drag.

…a dazzling spectacle and empowering celebration of survival…

It is established early on that the drag balls are judged based on “realness” – in short, how well the performers wear their extravagance; how they uniquely emulate the outside world.  The play centers around characters who are, for the most part, flamboyant, excessive, daring, and quick on the draw with flirting and slick comebacks.  The production, under Gash’s directing, matches that repartee with lightning pace led by flippant, action-driven narration by the House of Light’s backup dancers, The Fates (the equally wonderful Ysabel Jasa, Melissa Victor, and Dane Figueroa Edidi) working in terrific combination with Jason Sherwood’s versatile four-corner catwalk set, where actors and dressings can seamlessly emerge from mechanical double-doors.  The style is a delight and Dell Howlett’s masterfully-choreographed drag scenes, featuring an indescribable ensemble of Frank Labovitz’s idiosyncratic and flamboyant costume designs, will leave audiences cheering.  Yet, like how the performers wear their realness, the presentation is exceptional, but it’s the substance below what lies in plain view – the subtle factors that make up an immense, structured depth forming an outstanding whole – that makes everything believable, entertaining, and wonderful.  This is most visible, at first, through the characters’ humanities.

The cast play their roles not just as personas, but as complex and complete humans straddling the lines between identities, something seen and analyzed most clearly in Eric and Nina’s relationship.  Wright plays Eric as more disconnected while Rishawn’s Nina is smarmy and flirty, but in their moments together, alone, a shared tenderness resonates.  The mutual vulnerability portrayed by the two allows the audience a subtle lens to immerse them in Eric’s understanding of Nina’s trueness, which is ostracized by the world and only able to come alive through her performance.  Likewise, we gain an understanding of Eric’s feelings, expressed because of Nina’s encouragement before earning full life via a splendid dream sequence (regrettably set to Jefferson Airplane’s “White Rabbit,” used in a surreal context for the hundredth time since its inception).  A similar dynamic exists between House of Light performer Venus (Edwin Brown III) and sound designer boyfriend Deity (Desmond Bing).  The two generally exhibit feminine and masculine behavior, respectively, yet their interactions, mannerisms, and especially acts during the drag show, demonstrate how much they adopt traits from one another.  A scene where Nina and Eric sample a complex dessert as the former describes the ingredients to the latter, his eyes closed so he can taste without bias, realizes the beautiful metaphor for the individual: that unique assemblage of parts made most accessible upon an understanding of their overlap with another.

The greater understanding revealed through the performances and dialogue allows an audience to access the impeccable depth and care poured into this play’s design.  We note the walls, surrounded with mannequins and pictures of entertainment icons, also displaying posters from LGBTQ history.  We hear the dialogue, filled with scattered pop culture references utilized for some great insults and observations, also containing historical allusions to the Stonewall Riots, the legacy of Marsha P. Johnson, and the survivors of the AIDS epidemic, all reminders of the powering through injustice, strife, and suffering that made the present possible.  This play, a dazzling spectacle and empowering celebration of survival, accesses the human condition; the outside taken inside and born anew through the shows.

In an astoundingly beautiful scene, Dobson as Rey-Rey sits alone at her makeup table, neon light that bathed the show gone, and laments how with age, she loses her beauty and favor in the drag scene.  Someday, one of her darlings will replace her as Mother of the House of Light, and her world as she knew it will be gone; she will become the grandmother who inspired another.  They will inherit a world where they are still shut away, where manager Lucian (an extremely sleazy Michael Kevin Darnall) forces them to stay in character to avoid personal struggle with his homosexuality, confined in what should be freedom.  For this play, which sells the joy of drag shows so well, to take that critical lens to the identity of drag performance that, when sold solely as entertainment, exploits its very purpose, is nothing short of unbelievable.  Luckily, it feels unquestionably deserved by the play’s honesty and earnestness in its depiction and layered, empathic addressing of these topics.  This is one of the finest LGBTQ works put on stage.  Crafted with meaning, the sum of its parts a clear and obvious love for every experience poured into its creation and seen in its existence.

‘Wig Out!’ runs through August 6 at Studio Theatre.  For more information, click here.